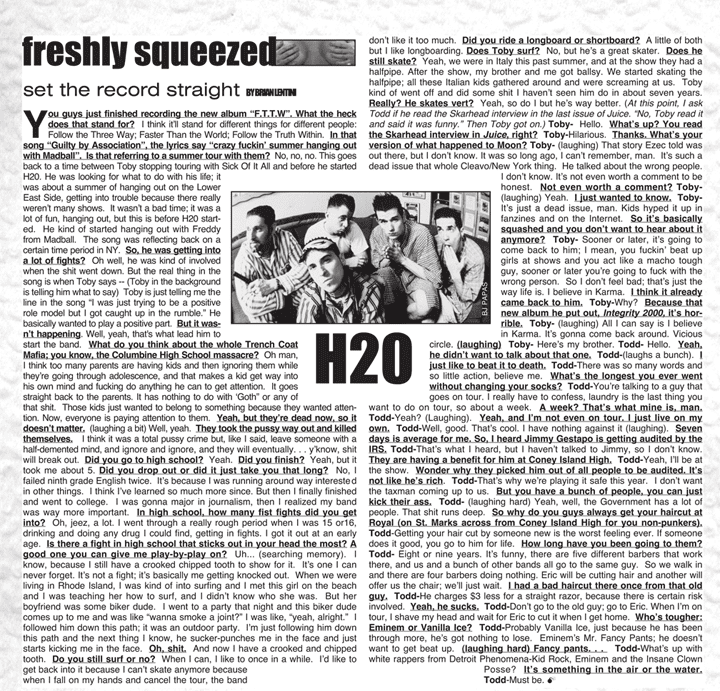 In that song “Guilty by Association”, the lyrics say “crazy fuckin’ summer hanging out with Madball”.  Is that referring to a summer tour with them?
No, no, no. This goes back to a time between Toby stopping touring with Sick Of It All and before he started H20. He was looking for what to do with his life; it was about a summer of hanging out on the Lower East Side, getting into trouble because there really weren’t many shows.  It wasn’t a bad time; it was a lot of fun, hanging out, but this is before H20 started.  He kind of started hanging out with Freddy from Madball.  The song was reflecting back on a certain time period in NY.

So, he was getting into a lot of fights?
Oh well, he was kind of involved when the shit went down. But the real thing in the song is when Toby says — (Toby in the background is telling him what to say)  Toby is just telling me the line in the song “I was just trying to be a positive role model but I got caught up in the rumble.” He basically wanted to play a positive part.  But it wasn’t happening.

Well, yeah, that’s what lead him to start the band.  What do you think about the whole Trench Coat Mafia; you know, the Columbine High School massacre?
Oh man, I think too many parents are having kids and then ignoring them while they’re going through adolescence, and that makes a kid get way into his own mind and fucking do anything he can to get attention.  It goes straight back to the parents. It has nothing to do with ‘Goth” or any of that shit.  Those kids just wanted to belong to something because they wanted attention. Now, everyone is paying attention to them. Yeah, but they’re dead now, so it doesn’t matter. I think it was a total pussy crime but, like I said, leave someone with a half-demented mind, and ignore and ignore, and they will eventually. . . y’know, shit will break out.

Did you go to high school?
Yeah.

Did you finish?
Yeah, but it took me about 5 years.

Did you drop out or did it just take you that long?
No, I failed ninth grade English twice.  It’s because I was running around way interested in other things.  I think I’ve learned so much more since. But then I finally finished and went to college.  I was gonna major in journalism, then I realized my band was way more important.

In high school, how many fist fights did you get into?
Oh, jeez, a lot. I went through a really rough period when I was 15 or16, drinking and doing any drug I could find, getting in fights. I got it out at an early age.

Is there a fight in high school that sticks out in your head the most? A good one you can give me play-by-play on?
Uh… (searching memory).  I know, because I still have a crooked chipped tooth to show for it.  It’s one I can never forget. It’s not a fight; it’s basically me getting knocked out.  When we were living in Rhode Island, I was kind of into surfing and I met this girl on the beach and I was teaching her how to surf, and I didn’t know who she was.  But her boyfriend was some biker dude.  I went to a party that night and this biker dude comes up to me and was like “wanna smoke a joint?” I was like, “yeah, alright.”  I followed him down this path; it was an outdoor party.  I’m just following him down this path and the next thing I know, he sucker-punches me in the face and just starts kicking me in the face.

Oh, shit.
And now I have a crooked and chipped tooth.