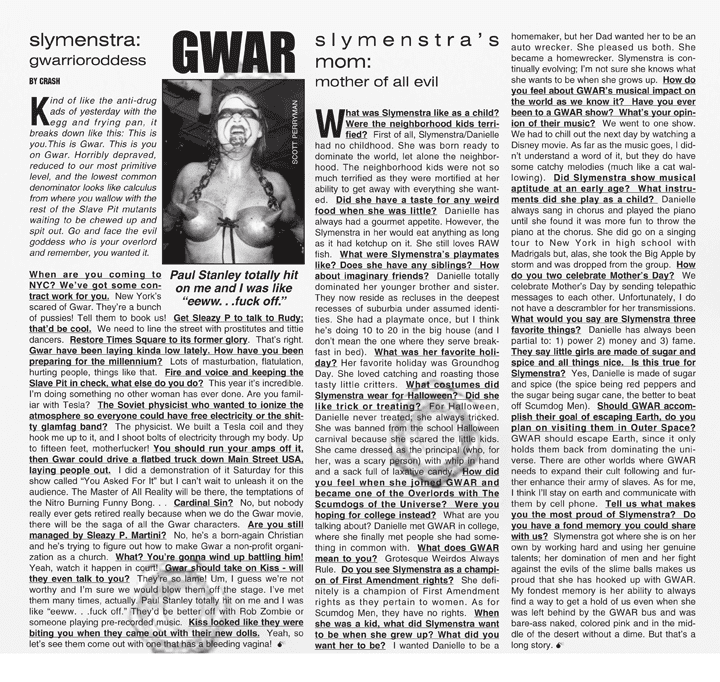 Kind of like the anti-drug ads of yesterday with the egg and frying pan, it breaks down like this: This is you.This is Gwar. This is you on Gwar. Horribly depraved, reduced to our most primitive level, and the lowest common denominator looks like calculus from where you wallow with the rest of the Slave Pit mutants waiting to be chewed up and spit out. Go and face the evil goddess who is your overlord and remember, you wanted it.

When are you coming to NYC? We’ve got some contract work for you.
New York’s scared of Gwar. They’re a bunch of pussies! Tell them to book us! Get Sleazy P to talk to Rudy; that’d be cool. We need to line the street with prostitutes and tittie dancers. Restore Times Square to its former glory. That’s right. Gwar have been laying kinda low lately.

How have you been preparing for the millennium?
Lots of masturbation, flatulation, hurting people, things like that. Fire and voice and keeping the Slave Pit in check, what else do you do? This year it’s incredible. I’m doing something no other woman has ever done. Are you familiar with Tesla? The Soviet physicist who wanted to ionize the atmosphere so everyone could have free electricity or the shitty band? The physicist. We built a Tesla coil and they hook me up to it, and I shoot bolts of electricity through my body. Up to fifteen feet! You should run your amps off it, then Gwar could drive a flatbed truck down Main Street USA, laying people out. I did a demonstration of it Saturday for this show called “You Asked For It” but I can’t wait to unleash it on the audience. The Master of All Reality will be there, the temptations of the Nitro Burning Funny Bong. . . Cardinal Sin? No, but nobody really ever gets retired really because when we do the Gwar movie, there will be the saga of all the Gwar characters. Are you still managed by Sleazy P. Martini? No, he’s a born-again Christian and he’s trying to figure out how to make Gwar a non-profit organization as a church. What? You’re gonna wind up battling him! Yeah, watch it happen in court! Gwar should take on Kiss – will they even talk to you? They’re so lame! Um, I guess we’re not worthy and I’m sure we would blow them off the stage. I’ve met them many times, actually. Paul Stanley totally hit on me and I was like “eeww.” They’d be better off with Rob Zombie or someone playing pre-recorded music. Kiss looked like they were biting you when they came out with their new dolls. Yeah, so let’s see them come out with one that has a bleeding vagina!

SLYMENSTRA’S MOM
MOTHER OF ALL EVIL

Did she have a taste for any weird food when she was little?
Danielle has always had a gourmet appetite. However, the Slymenstra in her would eat anything as long as it had ketchup on it. She still loves RAW fish.

What were Slymenstra’s playmates like? Does she have any siblings? How about imaginary friends?
Danielle totally dominated her younger brother and sister. They now reside as recluses in the deepest recesses of suburbia under assumed identities. She had a playmate once, but I think he’s doing 10 to 20 in the big house (and I don’t mean the one where they serve breakfast in bed).

What costumes did Slymenstra wear for Halloween? Did she like trick or treating?
For Halloween, Danielle never treated; she always tricked. She was banned from the school Halloween carnival because she scared the little kids. She came dressed as the principal (who, for her, was a scary person) with whip in hand and a sack full of laxative candy.

How did you feel when she joined GWAR and became one of the Overlords with The Scumdogs of the Universe? Were you hoping for college instead?
What are you talking about? Danielle met Gwar in college, where she finally met people she had something in common with.

What does Gwar mean to you?
Grotesque Weirdos Always Rule.

When she was a kid, what did Slymenstra want to be when she grew up? What did you want her to be?
I wanted Danielle to be a homemaker, but her Dad wanted her to be an auto wrecker. She pleased us both. She became a homewrecker. Slymenstra is continually evolving; I’m not sure she knows what she wants to be when she grows up.

How do you feel about Gwar’s musical impact on the world as we know it? Have you ever been to a Gwar show? What’s your opinion of their music?
We went to one show. We had to chill out the next day by watching a Disney movie. As far as the music goes, I didn’t understand a word of it, but they do have some catchy melodies (much like a cat wallowing).

Did Slymenstra show musical aptitude at an early age? What instruments did she play as a child?
Danielle always sang in chorus and played the piano until she found it was more fun to throw the piano at the chorus. She did go on a singing tour to New York in high school with Madrigals but, alas, she took the Big Apple by storm and was dropped from the group.

What would you say are Slymenstra three favorite things?
Danielle has always been partial to: 1) power 2) money and 3) fame.

Should Gwar accomplish their goal of escaping Earth, do you plan on visiting them in Outer Space?
GWAR should escape Earth, since it only holds them back from dominating the universe. There are other worlds where GWAR needs to expand their cult following and further enhance their army of slaves. As for me, I think I’ll stay on earth and communicate with them by cell phone.

Tell us what makes you the most proud of Slymenstra? Do you have a fond memory you could share with us?
Slymenstra got where she is on her own by working hard and using her genuine talents; her domination of men and her fight against the evils of the slime balls makes us proud that she has hooked up with GWAR. My fondest memory is her ability to always find a way to get a hold of us even when she was left behind by the GWAR bus and was bare-ass naked, colored pink and in the middle of the desert without a dime. But that’s a long story.