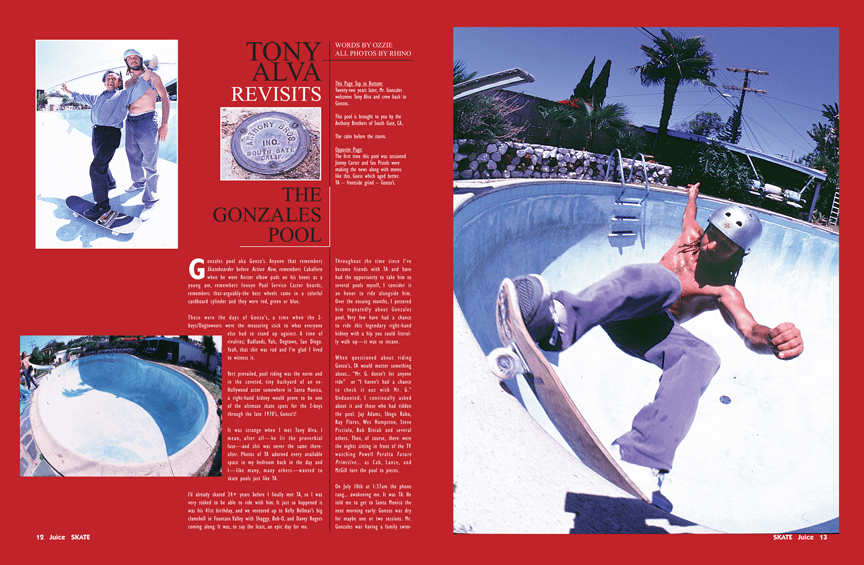 “So few people live life by their own rules. People get stuck in the stagnant pool of complacency and call that living. Armchair warriors always fail.”

Gonzales pool aka Gonzo’s. Anyone that remembers Skateboarder before Action Now, remembers Caballero when he wore Rector elbow pads on his knees as a young am, remembers Inouye Pool Service Caster boards, remembers that-arguably-the best wheels came in a colorful cardboard cylinder and they were red, green or blue.

Those were the days of Gonzo’s, a time when the Z-boys/Dogtowners were the measuring stick to what everyone else had to stand up against. A time of rivalries; Badlands, Vals, Dogtown, San Diego. Yeah, that shit was rad and I’m glad I lived to witness it.

Vert prevailed, pool riding was the norm and in the coveted, tiny backyard of an ex-Hollywood actor somewhere in Santa Monica, a right-hand kidney would prove to be one of the ultimate skate spots for the Z-boys through the late 1970’s, Gonzo’s!

It was strange when I met Tony Alva. I mean, after all—he lit the proverbial fuse—and shit was never the same thereafter. Photos of TA adorned every available space in my bedroom back in the day and I—like many, many others—wanted to skate pools just like TA.

I’d already skated 24+ years before I finally met TA, so I was very stoked to be able to ride with him. It just so happened it was his 41st birthday, and we ventured up to Kelly Bellmar’s big clamshell in Fountain Valley with Shaggy, Bob-O, and Davey Rogers coming along. It was, to say the least, an epic day for me.
Throughout the time since I’ve become friends with TA and have had the opportunity to take him to several pools myself, I consider it an honor to ride alongside him. Over the ensuing months, I pestered him repeatedly about Gonzales pool. Very few have had a chance to ride this legendary right-hand kidney with a hip you could literally walk up—it was so insane.

When questioned about riding Gonzo’s, TA would mutter something about… “Mr. G. doesn’t let anyone ride” or “I haven’t had a chance to check it out with Mr. G.” Undaunted, I continually asked about it and those who had ridden the pool. Jay Adams, Shogo Kubo, Ray Flores, Wes Humpston, Steve Picciolo, Bob Biniak and several others. Then, of course, there were the nights sitting in front of the TV watching Powell Peralta Future Primitive… as Cab, Lance, and McGill tore the pool to pieces.

On July 10th at 1:37am the phone rang… awakening me. It was TA. He told me to get to Santa Monica the next morning early: Gonzos was dry for maybe one or two sessions. Mr. Gonzales was having a family swimming party in the next several days and was going to refill the pool after it was cleaned. I could be of great assistance in that capacity, I thought to myself as I scribbled directions and agreed to a meeting time.

Damn! Needless to say, I didn’t sleep that night and fully annoyed my girlfriend with the noises of putting my skate stuff together and with Glen E. Friedman’s “Fuck You Heroes” photographs. I mean, I waited 20 years to ride this thing!

We went to Gonzo’s the next day: hosed it down, bailed it, swept it and went for a drive to wait for it to dry. I was elated to have been standing in that backyard with so much history!

TA decided that we should try and check the original Dogbowl and see what was up with the pool. He hadn’t seen it in 20 years himself and I don’t have to tell you what I thought about finding the Dogbowl. I mean THEE Dogbowl?!?! Believe it or not, TA wasn’t quite sure where it was. Twenty years changes things but after a half-hour or so we found it and although it was filled with crystal clear water—man did she look nice! It was perfection. Long, big transitions and pristine coping. The shallow end was so wide you could push across it. We admired the pool and I recalled many nights in my youth staring at Skateboard World magazine photos of this place.

We left—praying for the day the Dogbowl would be empty again—and went back to Gonzo’s. The sun was seriously scorching but we didn’t care and TA ripped like fuck. Backside airs, frontside airs and thread-the-needle between the light and the slide showed me that he’d been here more than once. Watching the sun go down and skating with TA—I remembered being a kid and realized that maybe I’ve never grown up. Probably a good thing too, because my childhood dreams are coming true.

I’ve met my heroes and now they are some of my friends. Just how many people in the world can say that?! So few people live life by their own rules. People get stuck in the stagnant pool of complacency and call that living. Armchair warriors always fail. They live on lies and pathetic excuses while my friends and I make our own path-quite happily—I might add. Gonzo’s has made me quite a happy man.

[Post note:] Since Buddy and Charno were filming the for Fruit of the Vine video, they accompanied TA and myself along with my roommate, Rhino, for a return session the very next Monday. A great deal of intense sessioning went down and Buddy left a large amount of skin on the pools surface attempting a frontside air over the deep stairs. He made it—really fucking rad too. Rhino threw backside over the shallow box—ridiculous! Charno did this sick line frontside standup to rock n roll on hip to backside over light to backside air—it was all pretty unreal. Wish you could’ve been there. Skate strong, skate long.

This pool is brought to you by the Anthony Brothers of South Gate, CA..

The calm before the storm.

Opposite Page:
The first time this pool was sessioned Jimmy Carter and Sex Pistols were making the news along with moves like this. Guess which aged better.
TA – frontside grind – Gonzo’s.

Clockwise from Top Left:
Charno finally puts the video camera down and throws a f.s. grind at a classic Gonzo session / Bloody Buddy Nichols compliments of the Anthony Brothers / Ozzie flows a b.s. air while researching the story thoroughly / Buddy Nichols goes from deep to shallow to knee / TA indy grabs a grind while eyeballing his next line into the shallow end