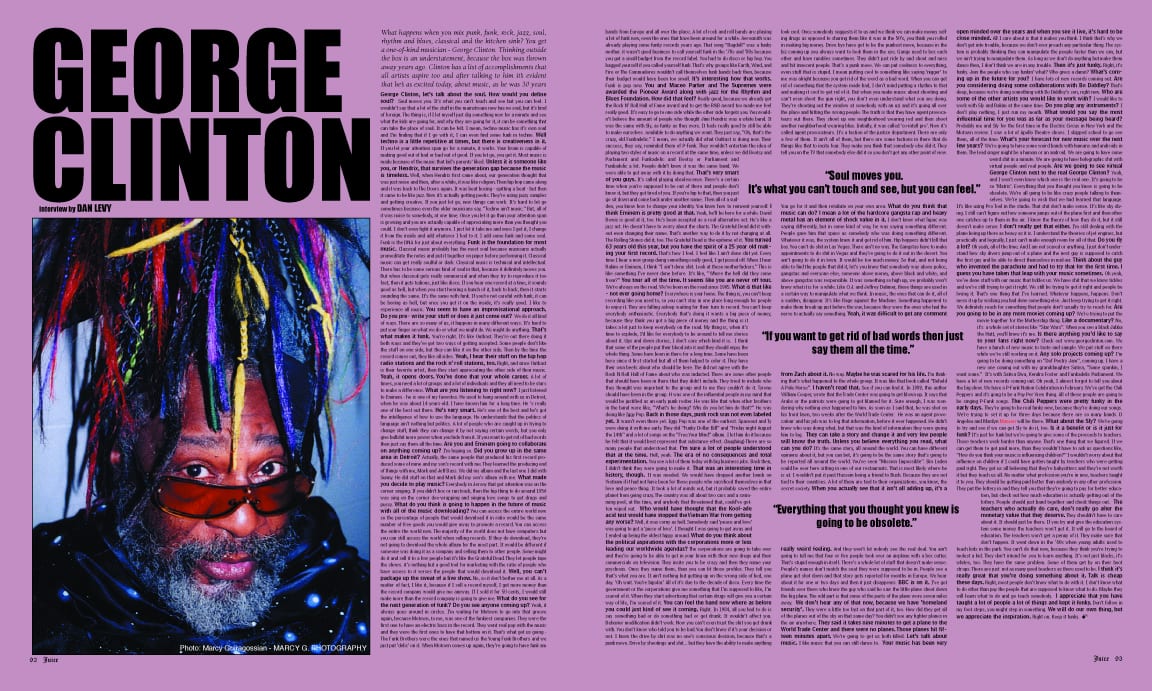 INTERVIEW AND INTRODUCTION BY DAN LEVY
PHOTO BY MARCY G

What happens when you mix punk, funk, rock, jazz, soul, rhythm and blues, classical and the kitchen sink? You get a one-of-kind musician – George Clinton. Thinking outside the box is an understatement, because the box was thrown away years ago. Clinton has a list of accomplishments that all artists aspire too and after talking to him it’s evident that he’s as excited today, about music, as he was 30 years ago. Long live the funk.

George Clinton, let’s talk about the soul. How would you define soul?
Soul moves you. It’s what you can’t touch and see but you can feel. I wouldn’t say that a lot of the stuff in the mainstream now has no soul, but it’s kind of foreign. The thing is, if I let myself just dig something new for a minute and see what the kids are going for, and why they are going for it, it can be something that can take the place of soul. It can be felt. I mean, techno music has its own soul and I’m finding that if I go with it, I can even find some funk in techno.

Well techno is a little repetitive at times, but there is creativeness in it.
If you let your attention span go for a minute, it works. Your brain is capable of making good out of bad or bad out of good. If you let go, you get it. Most music is made because of the music that kid’s parents’ liked.

“When Hendrix first came about, our generation thought that was just noise and then, after a while, it was like religion. Then hip hop came along and it was back to The Doors again. It was beat boxing – spitting a beat – but then it came to be like jazz. Now it’s actually getting poetic.”

Unless it is someone like you, or Hendrix, that survives the generation gap because the music is timeless.
Well, when Hendrix first came about, our generation thought that was just noise and then, after a while, it was like religion. Then hip hop came along and it was back to The Doors again. It was beat boxing – spitting a beat – but then it came to be like jazz. Now it’s actually getting poetic. They’re using jazzy samples and getting creative. If you just let go, new things can work. It’s hard to let go sometimes because even the older musicians say, “Techno ain’t music.” But, all of it was noise to somebody, at one time. Once you let it go than your attention span is growing and you are actually capable of appreciating more than you thought you could. I don’t even fight it anymore. I just let it take me and once I get it, I change it from the inside and add whatever I feel to it. I add some funk and some soul. Funk is the DNA for just about everything.

Funk is the foundation for most music.
Classical music probably has the most soul because musicians actually premeditate the notes and put it together on paper before performing it. Classical music can get really soulful or dark. Classical music is technical and intellectual. There has to be some serious kind of soul in that, because it definitely moves you. But when classical gets really commercial and when they try to reproduce it too fast, then it gets tedious, just like disco. If you hear one record at a time, it sounds good as hell, but when you start hearing a bunch of it, back to back, then it starts sounding the same. It’s the same with funk. If you’re not careful with funk, it can be boring as hell, but once you get it on the inside, it’s really good. I like to experience all music.

You seem to have an improvisational approach. Do you pre- write your stuff or does it just come out?
We do it all kind of ways. There are so many of us, it happens in many different ways. It’s hard to put your finger on what we do or what we might do. We might do anything.

That’s what makes it funk.
You’re right. It’s like Outkast. They’re out there doing it both ways and they’ve got two ways of getting accepted. Some people don’t like the stuff on one side, but they can like it on the other side. Then by the time the record comes out, they like all sides.

Yeah, I hear their stuff on the hip hop radio stations and the rock n’ roll stations, too.
Right, and since Outkast is their favorite artist, then they start appreciating the other side of their music.

Yeah, it opens doors. You’ve done that your whole career.
A lot of times, you need a lot of groups and a lot of individuals and they all need to be stars to make a difference.

What are you listening to right now?
I just listened to Eminem – he is one of my favorites. He used to hang around with us in Detroit, when he was about 14-years-old. I have known him for a long time. He ‘s really one of the best out there.

He’s very smart.
He’s one of the best and he’s got the intelligence of how to use the language. He understands that the politics of language ain’t nothing but politics. A lot of people who are caught up in trying to change stuff, think they can change it by not saying certain words, but you only give bullshit more power when you hide from it. If you want to get rid of bad words then just say them all the time.