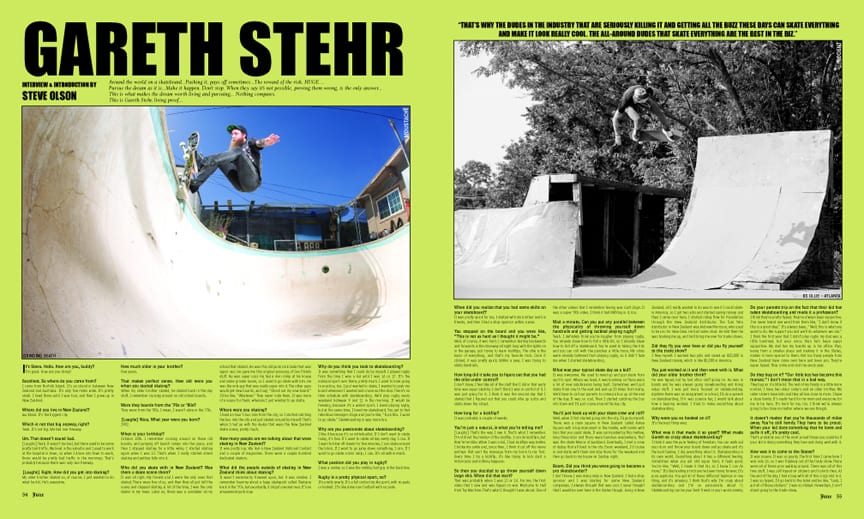 Around the world on a skateboard…Pushing it, pays off sometimes…The reward of the risk, HUGE… Pursue the dream as it is…Make it happen. Don’t stop. When they say it’s not possible, proving them wrong, is the only answer… This is what makes the dream worth living and pursuing… Nothing compares. This is Gareth Stehr, living proof…

“THAT’S WHY THE DUDES IN THE INDUSTRY THAT ARE SERIOUSLY KILLING IT AND GETTING ALL THE BUZZ THESE DAYS CAN SKATE EVERYTHING AND MAKE IT LOOK REALLY COOL. THE ALL-AROUND DUDES THAT SKATE EVERYTHING ARE THE BEST IN THE BIZ.”

Excellent. So where do you come from?
I come from Norfolk Island. It’s an island in between New Zealand and Australia. It’s only five miles wide. It’s pretty small. I lived there until I was four, and then I grew up in New Zealand.

Where did you live in New Zealand?
Auckland. It’s the biggest city.

Which is not that big anyway, right?
Yeah. It’s not big. We had one freeway.

Um. That doesn’t sound bad.
[Laughs] Yeah. It wasn’t too bad, but there used to be some pretty bad traffic. We lived in the suburbs and I used to work at the hospital in town, so when I drove into town to work, there would be pretty bad traffic in the mornings. That’s probably because there was only one freeway.

[Laughs] Right. How did you get into skating?
My older brother skated so, of course, I just wanted to do what he did. He’s awesome.

How much older is your brother?
Five years.

That makes perfect sense. How old were you when you started skating?
When my older brother skated, he skated back in the day stuff. I remember cruising around on old school boards.

When is your birthday?
October 18th. I remember cruising around on those old boards, and jumping off launch ramps into the grass, and then I stopped skating for a little while. I started skating again when I was 13. That’s when I really started street skating and getting fully into it.

Who did you skate with in New Zealand? Was there a skate scene there?
It was all right. My friends and I were the only ones that skated. There were five of us, and then they all just left the scene and stopped skating. A lot of the time, I was the only skater in my town. Later on, there was a caretaker at my school that skated. He was this old punk rock dude that was super rad. He gave me this original pressing of Sex Pistols stuff. He was super cool. He had a mini ramp at his house and some grinder boxes, so I used to go skate with him. He was the only guy that was really super into it. The other guys would get new boards, and say, “Check out my new board.” I’d be like, “Whatever.” They never rode them. It was more of a scene for them, whereas I just wanted to go skate.

Where were you skating?
I lived an hour’s bus ride from the city, so I started catching the bus into the city and just skated around by myself. That’s when I met up with the dudes that were the New Zealand skate scene, pretty much.

How many people are we talking about that were skating in New Zealand?
It was pretty big. We had a New Zealand National Contest and a couple of magazines. There were a couple hundred dedicated skaters.

What did the people outside of skating in New Zealand think about skating?
It wasn’t necessarily frowned upon, but it was smaller. I remember hearing about a huge skatepark called Skatopia back in the ‘70s, but eventually, it all got covered over. It’s an amusement park now.

Why do you think you took to skateboarding?
It was something that I could do by myself. I played rugby from the time I was a kid until I was 16 or 17. It’s the national sport over there, pretty much. I used to hate going to practice, too. I just wanted to skate. I wanted to grab my board whenever I wanted and cruise out the door. There’s no time schedule with skateboarding. We’d play rugby every weekend between 9 and 11 in the morning. It would be freezing, because it’s a winter sport. I loved playing rugby, but at the same time, I loved my skateboard. You get to that rebellious teenager stage and you’re like, “Fuck this. I want to go skate.” Skateboarding is way more fun.

What position did you play in rugby?
I was a center, so I was the nimble, fast guy in the back line.

Rugby is a pretty physical sport, no?
It’s pretty gnarly. It’s a full contact tackle sport, with no pads or helmet. It’s like American football with no pads.

When did you realize that you had some skills on your skateboard?
It was pretty quick for me. I skated with my brother and his friends, and then I had a shop sponsor within a year.

You stepped on the board and you were like, “This is not as hard as I thought it might be.”
Well, of course, it was hard. I remember skating backwards and forwards in the driveway all night long with the lights on in the garage, just trying to learn kickflips. The ollie is the basis of everything, and that’s my favorite trick. Once it clicked, it was pretty quick. Within a year, I was trying to skate handrails.

How long did it take you to figure out that you had the ollie under control?
I don’t know. I feel like all of the stuff that I did in that early time was super sketchy. I don’t think I was in control of it. I was just going for it. I think it was the second day that I skated that I figured out that you could ollie up curbs and skate down the street.

How long for a kickflip?
It was probably a couple of weeks.

You’re just a natural, is what you’re telling me?
[Laughs] That’s the way I see it. That’s what I remember. I’m still not the master of the kickflip. I can do kickflips, but they’re terrible. When I was a kid, I had kickflips way better. I broke my ankle and, since then, I think it cut off the nerve endings that sent the message from my brain to my foot. Every time I try a kickflip, it’s like trying to kick start a motorcycle and nothing happens.

So then you decided to go throw yourself down large shit. When did that start?
That was probably when I was 15 or 16. For me, the first video that I saw and was hyped on was Welcome to Hell from Toy Machine. That’s what I thought it was about. One of the other videos that I remember having was Curb Dogs. It was a super ’80s video. I think it had BMXing in it, too.

Wait a minute. Can you put any parallel between the physicality of throwing yourself down handrails and getting tackled playing rugby?
Yeah. I definitely think you’re tougher from playing rugby. You already know how to fall a little bit, so I already knew how to fall off a skateboard. You’re used to taking the hits and you can roll with the punches a little more. My shins were already battered from playing rugby, so it didn’t faze me when I started skateboarding.

What was your typical skate day as a kid?
It was awesome. We used to meet up and just skate from spot to spot. Where we lived, it was booming so there were a lot of new subdivisions being built. Sometimes we’d just skate from one to the next and end up 20 miles from home. We’d have to call our parents to come pick us up at the end of the day. It was so cool. Then I started catching the bus into town and I’d just cruise around the big city.

You’d just hook up with your skate crew and roll?
Well, when I first started going into the city, I’d go by myself. There was a main square in New Zealand called Aotea Square with a big monument in the middle, with banks with hips that you could skate. It was surrounded by this mellow, long three-stair and there were benches everywhere. That was the skate Mecca of Auckland. Eventually, I met a crew of dudes that all lived in the city. Every weekend, I’d cruise in and skate with them and stay there for the weekend and then go back to my house on Sunday night.

Boom. Did you think you were going to become a pro skateboarder?
I don’t know. I was doing okay in New Zealand. I had a shop sponsor and I was skating for some New Zealand companies. I always thought that was cool. I never thought that I would be over here in the States though. Living in New Zealand, all I really wanted to do was to see if I could skate in America, so I got two jobs and started saving money and then I came over here. I started riding flow for Foundation through the New Zealand distributor. The Tum Yeto distributor in New Zealand was Andrew Morrison, who used to be pro for New Deal. He had some clout. He told them he was hooking me up, and he’d bring me over for trade shows.

Did they fly you over here or did you fly yourself to the trade show?
I flew myself. I worked two jobs and saved up $10,000 in New Zealand money, which is like $5,000 in America.

You just worked at it and then went with it. What did your older brother think?
He was hyped, but he had other stuff going on. He was in bands and he was always going snowboarding and doing video stuff. I was just more focused on skateboarding. Anytime there was an assignment in school, I’d do a speech on skateboarding. If it was science fair, I would talk about how a bearing worked. I tried to make everything about skateboarding.

Why were you so hooked on it?
It’s the best thing ever.