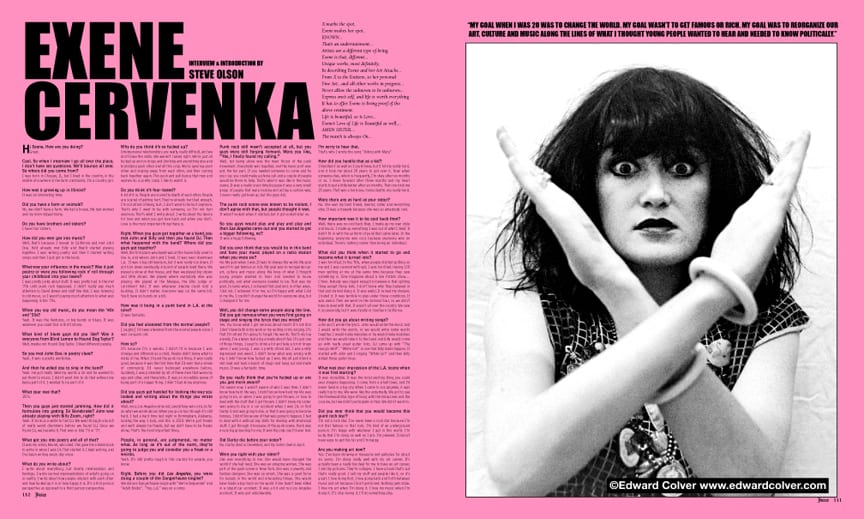 X marks the spot. Exene makes her spot KNOWN… That’s an understatement… Artists are a different type of being. Exene is that, different… Unique works, most definitely, In describing Exene and her Art Attacks… From X to the Knitters, to her personal Fine Art…and all other works in progress… Never allow the unknown to be unknown… Express one’s self, and life is worth everything it has to offer. Exene is living proof of the above sentiment. Life is beautiful, so is Love… Exene’s Love of Life is Beautiful as well…. AMEN SISTER…. The march is always On…

“MY GOAL WHEN I WAS 20 WAS TO CHANGE THE WORLD. MY GOAL WASN’T TO GET FAMOUS OR RICH. MY GOAL WAS TO REORGANIZE OUR ART, CULTURE AND MUSIC ALONG THE LINES OF WHAT I THOUGHT YOUNG PEOPLE WANTED TO HEAR AND NEEDED TO KNOW POLITICALLY.”

Hi Exene. How are you doing?
Great.

Cool. So when I interview I go all over the place. I don’t have set questions. We’ll bounce all over. So where did you come from?
I was born in Chicago, IL, but I lived in the country, in the middle of nowhere in the farm community. I’m a country girl.

How was it growing up in Illinois?
It was an interesting time.

Did you have a farm or animals?
No, we didn’t have a farm. We had a house. My dad worked and my mom stayed home.

Do you have brothers and sisters?
I have four sisters.

How did you ever get into music?
Well, that’s because I moved to California and met John Doe. He’d already met Billy and they’d started playing together. I was writing poetry and then I started writing songs and then I just got in the band.

What was your influence in the music? Was it just poetry or were you following rock n’ roll through your childhood into your teens?
I was pretty picky about stuff. It was pretty bad in the mid ‘70s until punk rock happened. I didn’t really pay much attention to David Bowie and stuff like that. I was listening to old music, so I wasn’t paying much attention to what was happening in the ‘70s.

When you say old music, do you mean the ‘40s and ‘50s?
Yeah. It was the Ventures, or big bands or blues. It was whatever you could find in thrift stores.

So you met John Doe in poetry class?
Yeah, it was a poetry workshop.

And then he asked you to sing in the band?
Yeah. He just really liked my words a lot and he wanted to put them to music. I didn’t want him to do that without me being part of it. I wanted to be part of it.

Then you guys just started jamming. How did it formulate into getting DJ Bonebrake? John was already playing with Billy Zoom, right?
Yeah. It took us a while to find DJ. We went through a bunch of really weird drummers before we found DJ. Once we found DJ, we became X. That was in late ‘76 or ‘77.

What got you into poetry and all of that?
It was my sister, Muriel, who died. She gave me a blank book to write in when I was 14. That started it. I kept writing, and I’ve been writing every day since.

Why do you think it’s so fucked up?
Interpersonal relationships are really, really difficult, and we don’t have the skills. We weren’t raised right. We’re just all fucked up and on drugs and drinking and everything else and brutalizing each other and all this crap. We’re ignoring each other and staying away from each other, and then coming back together again. This push and pull dance that men and women do is pretty crazy. I like to watch it.

Do you think it’s fear-based?
A lot of it is. People are scared to death of each other. People are scared of getting hurt. They’re already hurt bad enough. I’m not afraid of being hurt. I don’t want to be hurt anymore. That’s why I want to be with someone, so I’m not hurt anymore. That’s what I write about. I write about the desire for love and when you get love back and when you don’t. Love is the most important thing there is.

Right. When you guys got together as a band, you met John and Billy and then you found DJ. Then what happened with the band? Where did you guys get together?
Well, the first place we played was at the house Billy used to live in, and where John and I lived. It was near downtown L.A. It was a big old mansion, but it was really run down. It got torn down eventually. A bunch of people lived there. We played a show at that house, and then we played big shows and little shows. We played where everybody else was playing. We played at the Masque, the Elks Lodge or Larchmont Hall. It was wherever anyone could rent a building. It didn’t matter. Everyone was on the same bill. You’d have six bands on a bill.

How was it being in a punk band in L.A. at the time?
It was fantastic.

How so?
It’s because I’m a weirdo. I didn’t fit in because I was strange and different as a child. People didn’t know what to make of me. When I found the punk rock thing, it was really good, because it was the first time that I’d ever had a sense of community. I’d never belonged anywhere before. Suddenly, I was protected by all of these men that were my age and older, and these kids. It was an incredible sense of being part of a bigger thing. I didn’t feel alone anymore.

Did you guys get hassled for looking the way you looked and writing about the things you wrote about?
Well, once Los Angeles came out, everything was cool, as far as what we wrote about. When you go on tour though it’s still hard. I had a hard time last night in Birmingham, Alabama, looking the way I look, and this is 2010. We’re just freaks and we’ll always be freaks, but we don’t have to be freaks alone. That’s the most important thing.

People, in general, are judgmental, no matter what. As long as it’s out of the norm, they’re going to judge you and consider you a freak or a weirdo.
Yeah. It’s still pretty rough in this country for people, you know.

Punk rock still wasn’t accepted at all, but you guys were still forging forward. Were you like, “Yes, I finally found my calling.”
Well, not being alone was the main thrust of the punk movement. Everybody was together, and the music part was just the fun part. If you needed someone to come and fix your car, you could make a phone call and a couple of people would be there to help. That’s what it was like in the music scene. It was a really scary time because it was a very small group of people that were looking and acting a certain way. I never really got beat up, but the guys did.

The punk rock scene was known to be violent. I don’t agree with that, but people thought it was.
It wasn’t violent when it started, but it got violent later on.

Did you ever think that you would be in this band and have your music played on a radio station when you were six?
No. My goal when I was 20 was to change the world. My goal wasn’t to get famous or rich. My goal was to reorganize our art, culture and music along the lines of what I thought young people wanted to hear and needed to know politically, and what everyone needed to be. That was my goal. In some ways, I achieved that goal and, in other ways, I did not. I achieved it for me, so I’m happy with what I did in my life. I couldn’t change the world for everyone else, but I changed it for me.