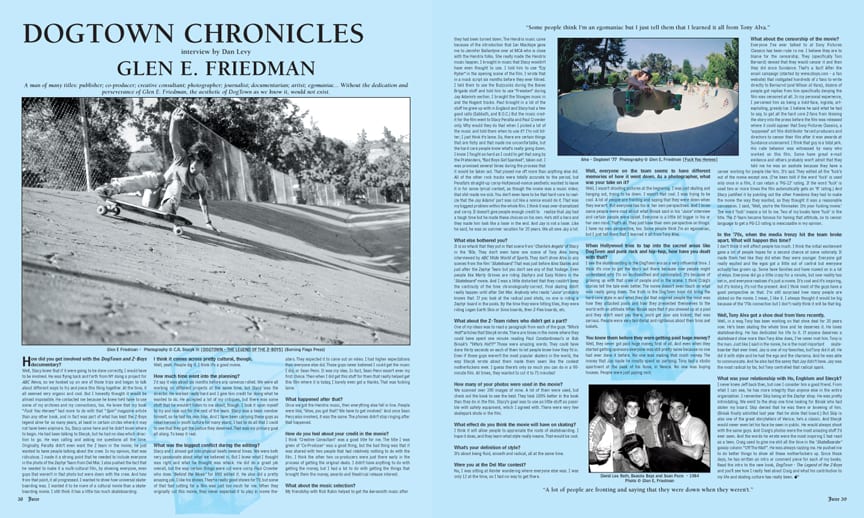 Welcome to our series of articles about the Zephyr competition team and the “DogTown and Z-Boys” documentary. The first series of the DogTown Chronicles began in issue 52 featuring interviews with the original Zephyr shop owners, Jeff Ho, Craig Stecyk III and Skip Engblom. In issue 53, Juice talked to Zephyr team riders Stacy Peralta and Bob Biniak. Issue 54 featured Z-Girl Peggy Oki and Z-Boys – Wentzle Ruml IV and Jay Adams. Issue 55, Juice Magazine talked with Zephyr team riders Paul Constantineau, Tony Alva and Shogo Kubo, as well as DogTown documentarian Glen E. Friedman. Issue 56, Nathan Pratt tells his side of the Dogtown story. Issue 57, Allen Sarlo gives his perspective on the documentary and the classic style of The Z-Boys – the ultimate instigators of aggressive surfing and skating. In Issue 58, Zephyr team rider Chris Cahill talks about why he was left out of the movie completely… This series of articles has generated plenty of controversy and proves, in fact, that history does repeat itself…

How did you get involved with the DogTown and Z-Boys documentary?
Well, Stacy knew that if it were going to be done correctly, I would have to be involved. He was flying back and forth from NY doing a project for ABC News, so we hooked up on one of those trips and began to talk about different ways to try and piece this thing together. At the time, it all seemed very organic and cool. But I honestly thought it would be almost impossible. He contacted me because he knew he’d have to use some of my archives and my connections, too. He knew that my book “Fuck You Heroes” had more to do with that “Spin” magazine article than any other book, and in fact was part of what has kept the Z-Boys legend alive for so many years, at least in certain circles where it may not have been anymore. So, Stacy came here and he didn’t know where to begin. He had been talking to Stecyk, but he had no idea which direction to go. He was calling and asking me questions all the time. Originally, Peralta didn’t even want the Z team in the movie; he just wanted to have people talking about the crew. In my opinion, that was ridiculous. I made it a strong point that he needed to include everyone in the photo of the Zephyr Team from Del Mar. I also pushed the fact that he needed to make it a multicultural film, by showing everyone, even guys that weren’t in that photo but were down with the crew. And how from that point, it all progressed. I wanted to show how universal skateboarding was. I wanted it to be more of a cultural movie than a skateboarding movie. I still think it has a little too much skateboarding.

“SOME PEOPLE THINK I’M AN EGOMANIAC BUT I JUST TELL THEM THAT I LEARNED IT ALL FROM TONY ALVA.”

I think it comes across pretty cultural, though.
Well, yeah. People dig it. I think it’s a good movie.

How much time went into the planning?
I’d say it was about six months before any cameras rolled. We were all working on different projects at the same time, but Stacy was the director. He worked really hard and I give him credit for doing what he wanted to do. He accepted a lot of my critiques, but there was some stuff that he wouldn’t listen to me about, though. I took it upon myself to try and look out for the rest of the team. Stacy was a team member himself, so he had his own bias. And I have been carrying these guys as rebel heroes in youth culture for many years; I had to do all that I could to see that they got the justice they deserved. That was my primary goal all along. To keep it real.

What was the biggest conflict during the editing?
Stacy and I almost got into physical beefs several times. We were both very passionate about what we believed in. But I knew what I thought was right and what he thought was whack. He did do a great job overall, but the way certain things were cut were corny. Paul Crowder who does “Behind the Music” for VH1 edited it. He also did a pretty amazing job. I like his shows. They’re really good shows for TV, but some of that fast cutting for a film was just too much for me. When they originally cut this movie, they never expected it to play in movie theaters. They expected it to come out on video. I had higher expectations than everyone else did. Those guys never believed I could get the music I did, or Sean Penn. It was my idea. In fact, Sean Penn wasn’t even my first choice. Then when I did get this stuff for them that really helped get this film where it is today, I barely even got a thanks. That was fucking lame.

What happened after that?
Once we got the Hendrix music, then everything else fell in line. People were like, “Wow, you got that? We have to get involved.” And once Sean Penn was involved, it was the same. The phones didn’t stop ringing after that happened.