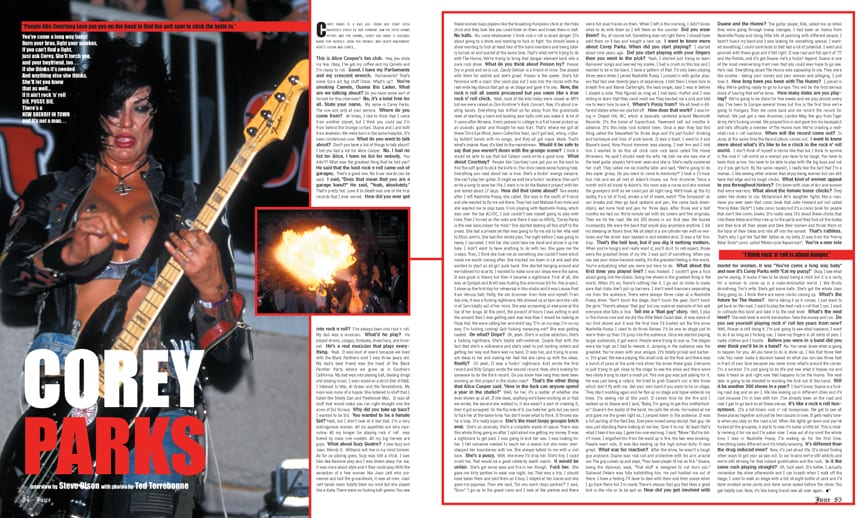 Corey Parks is a bad ass. From her start with Nashville Pussy to her current line-up with Duane Peters and The Hunns, Corey has made a credible name for herself. Grab yer smokes and heavy machinery. Here’s Olson and Corey…

This is Alice Cooper’s fan club.
Hey, you stole my line. Okay, I’ve got my coffee and my Camels and I’m ready to roll.

Good. I have my Parliaments and my crescent wrench.
Parliaments? That’s some Euro art stuff Olson. What’s up?

“I THINK ROCK N’ ROLL IS ABOUT DANGER.”

You’re smoking Camels, Osama Bin Laden.
What are we talking about? Do you have some sort of format for this interview?

No, it’s a total free for all. State your name.
My name is Corey Parks. The one and only at your service.

Where do you come from?
At times, I like to think that I come from another planet, but I think you could say I’m from behind the Orange curtain. Duane and I are both from Anaheim. We were born in the same hospital. It’s been condemned now.

No. I had no list for Alice. I have no list for nobody.
You didn’t? What was the greatest thing that he told you?

He said that the best rock n’ roll came out of garages.
That’s a good one. No truer words can be said.

I said, “Does that mean that you are a garage band?” He said, “Yeah, absolutely.”
That’s pretty hot. Love it to Death was one of the first records that I ever owned.

How did you ever get into rock n’ roll?
I’ve always been into rock n roll. My dad was a musician.

He’s a real musician that plays everything.
Yeah. It was kind of weird because we lived with the Black Panthers until I was three years old. My dad’s best friend was the head of the Black Panther Party where we grew up in Southern California. My dad was into playing ball, dealing drugs and playing music. I was raised on a strict diet of RandB. I listened to War, Al Green and the Temptations. My mom was more of a hippie. She listened to stuff that I hated like Steely Dan and Fleetwood Mac. It was all stuff that would make you run right straight into the arms of Sid Vicious.

Why did you take up bass?
I wanted to be Sid.

You wanted to be a female Sid?
Yeah, but I didn’t look at it like that. I’m a very androgynous woman. All my appetites are very masculine. All my hunger for playing rock n’ roll was fueled by male role models. All my big heroes are guys.

What about Suzy Quatro?
I love Suzy and Joan. Wendy O. Williams will live in my mind forever. As far as playing goes, Suzy was still a chick. I saw Dee dee Ramone play and I was blown away. For me, it was more about style and if they could play. With the exception of a few women like Joan Jett who pioneered and laid the groundwork, it was all men. Joan Jett hands down totally blew my mind but she played like a dude. There were no fucking ball gowns. You see these women bass players like the Smashing Pumpkins chick or the Hole chick and they look like you could blow on them and break them in half.

No balls.
No, none whatsoever. I think rock n roll is about danger. It’s about going to a show and wanting to fuck or fight. You should leave a show wanting to fuck at least two of the band members and being totally turned on and scared at the same time. That’s what we’re trying to do with The Hunns. We’re trying to bring that danger element back into a punk rock show.

What do you think about Poison Ivy?
Poison Ivy is great and so is Lux. Candy Delmar is a friend of mine. She played with them for awhile and she’s great. Poison is the queen. She’s full feminine with a snarl. She could play but I was into the chicks with the real wide leg stance that got up on stage and gave it to you.

Now, the rock n roll all seems processed but you seem like a true rock n’ roll chick.
Well, most of the kids today were raised on MTV but we were raised on Don Kirshner’s Rock Concert. Now, it’s about creating bands. Everything has drifted so far away from the grassroots level of starting a band and busting your balls until you make it. A lot of it came after Nirvana. Every jackass in college in a frat house picked up an acoustic guitar and thought he was Kurt. That’s where we got all these Third Eye Blind, damn Collective Soul, can’t get laid, whiny, crybaby bullshit bands with no songs, and they all got major deals. That’s what’s insane. Now, it’s bled to the mainstream.

What about Courtney?
People like Courtney Love pat you on the back to find the soft spot to stick the knife in. The chick needs some fucking help. Everything you read about her is true. She’s a fuckin’ energy vampire. She can’t play her guitar. It might as well be a fuckin’ necklace. She can’t write a song to save her life. I went in to do the Bastard project with her and lasted about 17 days.

How did that come about?
Two weeks after I left Nashville Pussy, she called….