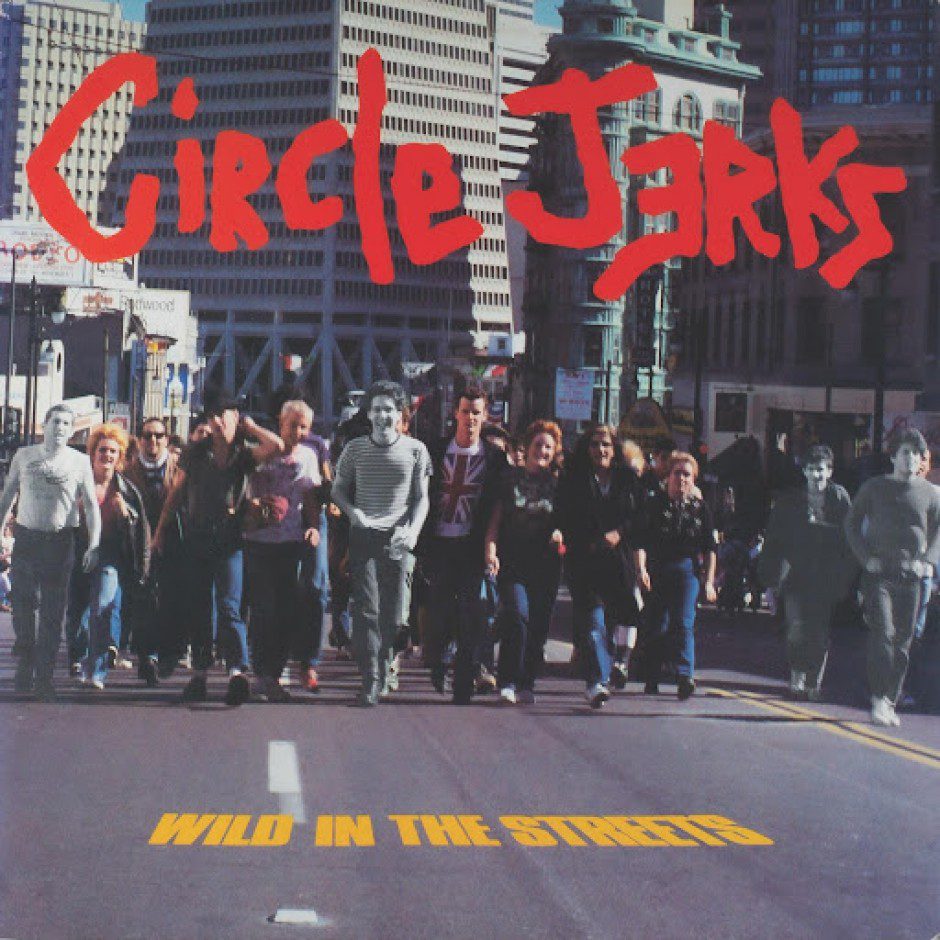 CIRCLE JERKS’ ‘Wild in the Streets’ turns 40 and the band has released a new music video to celebrate, featuring Steve Olson, Lance Mountain, Christian Hosoi, Eric Koston, Kevin “Spanky” Long, Tony Hawk, Victoria Ruesga, Sal Barbier, Rowan Zorilla, Sean Malto, Anaiah Lei, Lizzie Armanto, Dashawn Jordan, and Max Perlich. The Circle Jerks has also announced a Wild in the Streets 40th Anniversary Deluxe Edition via Trust Records, that will be available February 18th, as well as its first full U.S. Tour in over 15 years, which starts the same day, with support from 7Seconds, Adolescents and Negative Approach. Get your show tickets here while you can.

Press:
Wild in the Streets, the scorching 1982 sophomore album by the pathfinding Southern California hardcore punk band the Circle Jerks, will receive a remastered, augmented LP reissue on February 18 by Trust Records.

The release of ‘Wild in the Streets’ coincides with the February kickoff of the Circle Jerks’ 40th Anniversary Tour with support from Negative Approach, Adolescents, and 7Seconds (who will be reuniting for the first time in over five years).

CIRCLE JERKS AND WILD IN THE STREETS:

As writer Chris Morris – who received a Grammy Award nomination for his writing for the boxed set No Thanks! The ‘70s Punk Rebellion — notes in his history, the Circle Jerks’ wound-up rendition of Jeffreys’ “Wild in the Streets,” originally issued in a different version on a 1980 Posh Boy Records compilation, “was the first music released on record by the Circle Jerks, and the number became a suitable and highly appropriate calling card for a band that lived up to its title.”

By 1981, the quartet was regularly tearing up Southern California clubs and halls, drawing large and frequently riotous crowds. Following the release of Group Sex by the independent Frontier Records, the band was in the hunt for a new label, and their then-manager Gary Hirstius convinced David Anderle, vice president of A&R at A&M Records, to take a look at them at an L.A. club gig.

Vocalist Keith Morris, then one of the reigning wild men of SoCal hardcore, recalls, “We play, and after we dry off and socialize a bit backstage, Gary introduces me to David Anderle. David Anderle looks at me and says, ‘I’ve got to record you before you kill yourself.’”
Though signing with A&M was a bridge too far for the prominent label, Anderle volunteered to co-produce an album for the group, which was recorded at label co-founder Herb Alpert’s private studio on the old Charlie Chaplin film lot in Hollywood. Like its predecessor, the record that became Wild in the Streets was essentially cut live, with minimal overdubs; recording and mixing took a total of four days.

Guitarist Hetson says, “Pretty much everyone there was like, ‘Just do your thing, it’s great.’ [Anderle] wanted us to set up and play. That’s what our goal was. We weren’t trying to make a quote-unquote finely produced album of art. We were doing our thing, and hopefully it got captured in the studio.”

The Circle Jerks ended up signed to Faulty Products, an indie distributor/imprint run by the Police’s manager Miles Copeland, whose A&M-distributed I.R.S. Records released best-selling records by the Go-Go’s and R.E.M. The design and release of ‘Wild in the Streets’ is recalled in the new notes by I.R.S./Faulty staffers John Guarnieri, Betsy Alexander, Carmel Conlin, and Carlos Grasso, as well as by legendary punk photographer Edward Colver, who snapped the classic cover shot of the band members and their friends invading a San Francisco street parade.

Following a run of local shows that drew frequent visits from riot-equipped L.A. police and a near-fatal drug overdose by bassist Roger Rogerson, the band embarked on a chaotic six-week U.S. tour – their first major American trek – which climaxed with a New Orleans show (promoted by Carlo Nuccio, later the drummer for Keith Morris’ band Buglamp), where the Jerks’ diminutive, out-of-control lead singer was locked in one of Lehrer’s drum cases.

On the heels of the Circle Jerks’ return to L.A., Faulty Products was shuttered; though Wild in the Streets quickly became unavailable, re-releases of the record by Frontier and Epitaph kept the early legacy of L.A.’s hardcore pioneers alive. The new Trust LP issue of the album, which tells the complete story of its remarkable genesis and rampaging aftermath, will stand as the definitive rendering of this crucial early punk opus.