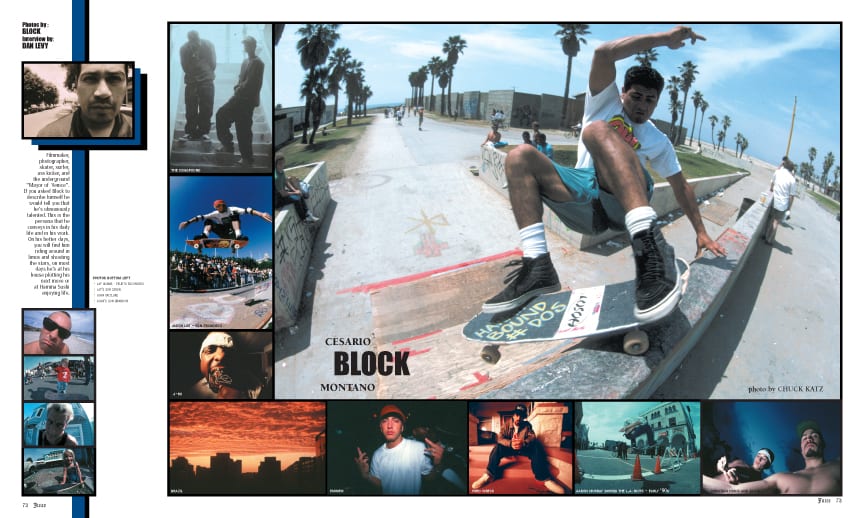 BLOCK
INTERVIEW AND INTRODUCTION BY DAN LEVY
PHOTOGRAPHY BY BLOCK

Filmmaker, photographer, skater, surfer, ass kicker and the underground Mayor of Venice. If you asked Block to describe himself he would tell you that he’s obnoxiously talented. This is the persona that he conveys in his daily life and in his work. On his better days, you will find him riding around in limos and shooting the stars, on most days he’s at his house plotting his next move or at Hama Sushi enjoying life.

How did you get the name Block?
It started off because I had a square head. I’ll show you a picture of me as a kid someday.

Where were you born?
Brawly, CA, on the border of Mexico.

When did you move to Venice?
I moved here when I was two years old.

“THE M.S.A. WAS DOWN. WE WERE TRYING TO HELP KIDS OUT AND KEEP THEM OUT OF GANGBANGING.”

When did you start skating?
I started skating when I was thirteen but we were surfing first. Jay Adams and the boys would be out in the water saying, “Why don’t you skate?” We used to ride dirt bikes and just terrorize.

Did you start taking photos then?
I got into photography in the ninth grade. My brother gave me a camera and I started shooting pictures of a band called Beuwolf that played my ninth grade picnic. I started taking it seriously in high school and took art classes at Otis. After I graduated, I went to Cal Arts.

Your first paid work was taking skate photos?
Yeah, professionally, it was all skateboarding. I did some ads for Independent and some stuff for Dogtown Skateboards, and Hosoi. Then we did some interviews in the magazines and I shot two covers for Thrasher.

Your first cover was Pep?
May 1991 was Pep and February 1992 was Tuma. Then everything changed and I started getting into music.

Did you ever see Stecyk shooting?
I remember meeting Stecyk a long time ago. Stacy Peralta was the first one to take my photograph and put me in the magazine. I was seventeen years old.

Who was your crew back then?
Well, my house was the hang-out pad. You could come here and find out what everyone was doing and where everyone was hanging. It was Christian, Jesse Martinez, Tim and Kelly Jackson, Eric Dressen, Aaron Murray, Scott Oster, Pat Baries, all the Z guys, Cooksie, J.T., and Jef Hartsel. All of those guys were skating and getting in the magazines. Natas was around but he was doing his thing in Santa Monica. It was Julian Stranger, Eric Britton, Joey Tran, Little Man, and a handful of locals that skated everyday and were always around.

What was the M.S.A.?
We had an association called the M.S.A. that I helped organize. It was my brother, and a bunch of our friends, Fernando, Ponch, and Juandie, and Little Ricky. We were the Mexican Surfing Association. There were fourteen of us and we had meetings every week. It was fun. We ended up buying a house in Mexico where everyone could go to surf. We had raffles and threw big parties and ragers. We had our own stickers and t-shirts. There were so many photos in Thrasher with skaters like Cab with an M.S.A. sticker on his board and Christian Hosoi, Eric Dressen, Natas, Gator and wearing M.S.A. t-shirts. The M.S.A. was down. We were trying to help kids out and keep them out of gangbanging. That was the ’80s. The crack cocaine and the drive-by thing was going down. It was a different time. We were like, “Don’t gangbang. Skateboard!” It actually made a lot of difference. I’m surprised.