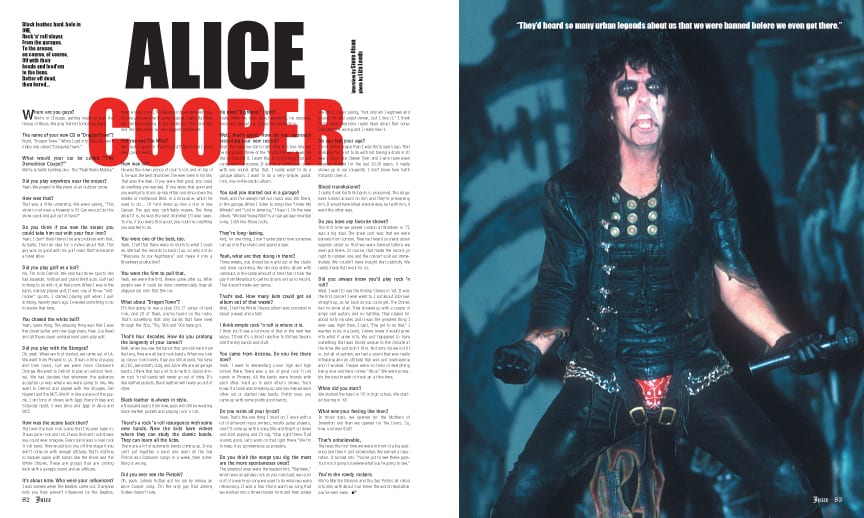 Where are you guys?
We’re in Chicago, getting ready to play the House of Blues. We play Detroit tomorrow night.

The name of your new CD is’Dragon Town’?
Right, ‘Dragon Town.’ When I get into NASCAR, we’ll make one called Dragging Town.

What would your car be called The Demolition Coupe?
We’re actually building one – the Nightmare Mobile.

Did you play anywhere near the sniper?
Yeah. We played in Maryland at an outdoor show.

“When we first started, we came out of LA. We went from Phoenix to LA. It was a time of peace and love music, but we were more Clockwork Orange. We went to Detroit to play an outdoor festival. We had decided that wherever the audience accepted us was where we were going to live.”

How was that?
That was a little unnerving. We were saying, ‘This show is not near a freeway is it? Can we just do this show quick and get out of here?’

Do you think if you saw the sniper you could take him out with your four iron?
Yeah. I don’t think there’d be any problem with that. Actually, I had an idea for a movie about that. This guy was so good with his golf clubs that he became a hired killer.

Did you play golf as a kid?
No, I’m from Detroit. We only had three sports. We had baseball, football and grand theft auto. Golf had nothing to do with it, at that point. When I was in the band, nobody played golf. It was one of those anti-rocker sports. I started playing golf when I quit drinking, twenty years ago. I needed something to do to waste that time.

You chased the white ball?
Yeah, same thing. The amazing thing was that I was the closet golfer and now Iggy plays. Now, Lou Reed and all these super underground guys play golf.

Did you play with the Stooges?
Oh, yeah. When we first started, we came out of LA. We went from Phoenix to LA. It was a time of peace and love music, but we were more Clockwork Orange. We went to Detroit to play an outdoor festival. We had decided that wherever the audience accepted us was where we were going to live. We went to Detroit and played with the Stooges, Ted Nugent and the MC5. We fit in like a piece of the puzzle. I did tons of shows with Iggy. Every Friday and Saturday night, it was Alice and Iggy or Alice and MC5.

How was the scene back then?
That was the best rock scene that I’ve ever been in. It was pure rock and roll. It was the best rock shows you could ever imagine. Every band was a real rock n roll band. They would boo you off the stage if you didn’t come on with enough attitude. That’s starting to happen again with bands like the Hives and the White Stripes. These are groups that are coming back with a garage sound and an attitude.

It’s about time. Who were your influences?
I was sixteen when the Beatles came out. If anyone tells you they weren’t influenced by the Beatles, they’re lying to you. The Beatles influenced everyone. No one gets away with being original, really. But then we started listening to the Yardbirds. The Yardbirds and The Who were our two biggest influences.

Did you see The Who?
We used to open for The Who. Keith Moon and I were very good friends.