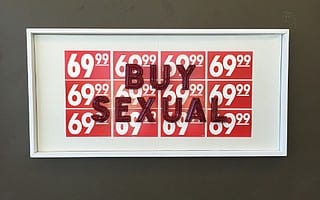 “Buy Sexual” Artwork by Steve Olson Censored by the Man

Calling on all artists and defenders of our Freedom of Speech… A petition has been generated to CENSOR Steve Olson’s art from an exhibit in Santa Maria in Santa Barbara County. If this enrages you as much as it should, please sign this petition to KEEP Steve Olson’s art in the exhibit. 100 signatures are needed by Thursday September 17, 2015 at noon in order to present this petition at the meeting being held to discuss this censorship action on Thursday night. Thank you…

Please hit this link to sign the petition NOT to censor Steve Olson’s art.

An influential figure in the skateboarding and music communities, Steve Olson is a collected artist who has exhibited internationally. His sculptures are on permanent display in public spaces in Texas and Louisiana. His iconic stature in the skateboarding and music cultures grew from his inherent characteristics as provocateur of change, and a questioner of established morays. These traits are seen throughout his art making its value inherent.

“Buy Sexual”, an art work presently on display in the Betteravia Government Center, should remain on display. Steve Olson, the artist, says that the piece is “a comment on the use of sex to sell commercial objects in American culture.” To remove the artwork would be an act of censorship, as opposed to honoring free speech, a fundamental right instituted by America’s Founding Fathers.

As the ACLU states: “A free society is based on the principle that each and every individual has the right to decide what art or entertainment he or she wants — or does not want — to receive or create. Once you allow the government to censor someone else, you cede to it the the power to censor you, or something you like. Censorship is like poison gas: a powerful weapon that can harm you when the wind shifts. Freedom of expression for ourselves requires freedom of expression for others. It is at the very heart of our democracy.”

The petition is urging the Arts Commissioners of Santa Barbara County to keep the Steve Olson artwork on display.

Here is a link to the Santa Barbara Independent coverage of the story: 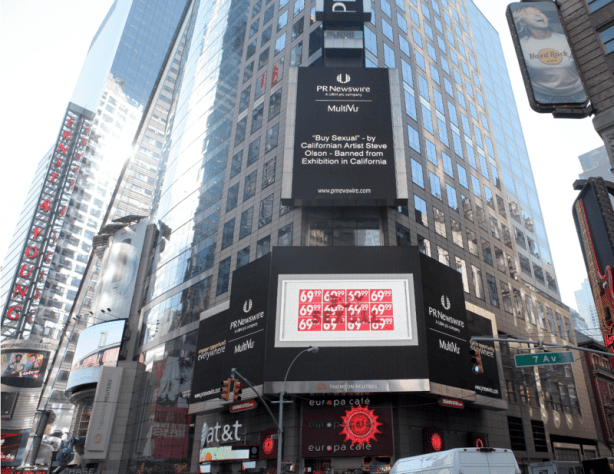 Here is a link to the PR Newswire Press Release 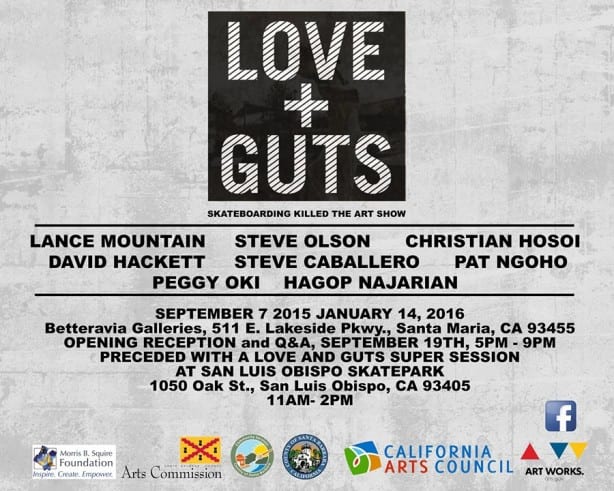 Unperturbed by the controversy Steve Olson says, “Well, it’s about what I’d expect in today’s climate of knee-jerk reactions. I’d prefer the art to provoke thought about the world we live in – the piece is commentary on how sex sells – everything from cars and Instagram ‘likes’ to news and clothing. The fact that it’s a play on words probably went right over his head.”

The exhibition, coordinated by the County Art in Public Places (CAPP) Committee, is stated to run for three months from Monday, September 14, 2015. A sub group of the Arts Commission in Santa Barbara, CAPP committee members are expected to discuss the controversy at meetings scheduled this week.

About Steve Olson:
Steve Olson is a Californian Artist, Sculptor and Skateboarder. Credited with introducing skateboarding to Punk in the late 70’s along with becoming the world’s first “vertical” skateboard champion, Olson has gone on to lead a distinguished career in art and is collected and shown internationally – including the Venice Biennale. His work as a sculptor has produced public works for cities in Texas andLouisiana. His art centers on social commentary, often comprising mixed media assemblies. Olson was inducted to the Skateboarding Hall of Fame in 2014. Learn more about Steve Olson at http://www.olsonxolson.com
TWITTER: https://twitter.com/mrsteveolson

Sep 17, 2015 — VICTORY!!! Olson wins again! We just received news from Steve Olson in regards to the vote held today to determine the fate of Olson’s art piece “Buy Sexual” and whether it could remain in the Love + Guts show in the Betteravia Galleries in Santa Maria, California in Santa Barbara County, after Bob Nelson, chief of staff to 4th District Supervisor Peter Adam removed the art from the show and put it in a broom closet, and a petition and formal request was made by the office of Peter Adam to remove the art from the exhibit permanently.

Thanks to everyone that signed the Do NOT Censor Steve Olson’s artwork in the Betteravia Galleries petition. It’s a true VICTORY for artists everywhere.

For more news about Steve Olson and his art, please visit http://olsonxolson.com/