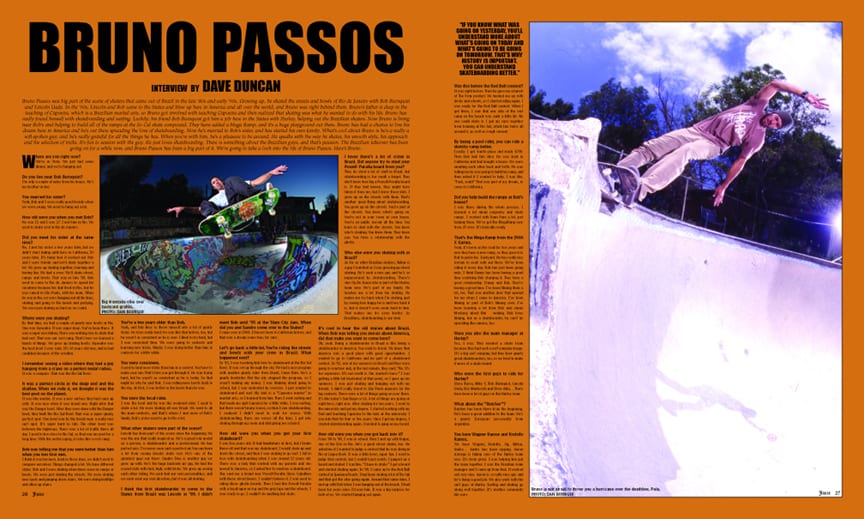 Bruno Passos was big part of the scene of skaters that came out of Brazil in the late ’80s and early’90s. Growing up, he skated the streets and bowls of Rio de Janeiro with Bob Burnquist and Lincoln Ueda. In the ’90s, Lincoln and Bob came to the States and blew up here in America and all over the world, and Bruno was right behind them. Bruno’s father is deep in the teaching of Capoeira, which is a Brazilian martial arts, so Bruno got involved with teaching Capoeira and then realized that skating was what he wanted to do with his life. Bruno has really found himself with skateboarding and surfing. Luckily, his friend Bob Burnquist got him a job here in the States with Hurley, helping out the Brazilian skaters. Now Bruno is living near Bob’s and helping to build all of the ramps at the So Cal skate compound. They have added a Mega Ramp, and it’s a huge playground out there. Bruno has had a chance to live his dream here in America and he’s out there spreading the love of skateboarding. Now he’s married to Bob’s sister, and has started his own family. What’s cool about Bruno is he’s a really a soft-spoken guy, and he’s really grateful for all the things he has. When you’re with him, he’s a pleasure to be around. He speaks with the way he skates, his smooth style, his approach and his selection of tricks. It’s fun to session with the guy. He just loves skateboarding. There is something about the Brazilian guys, and that’s passion. The Brazilian takeover has been going on for a while now, and Bruno Passos has been a big part of it. We’re going to take a look into the life of Bruno Passos. Here’s Bruno.

Where are you right now?
We’re in Vista. We just had some dinner, and we’re hanging out.

Do you live near Bob Burnquist?
I’m only a couple of miles from his house. He’s my brother-in-law.

You married his sister?
Yeah, Bob and I were really good friends when we were young. We used to hang out a lot.

Did you meet his sister at the same time?
No, I met his sister a few years later, but we didn’t start dating until here in California, 20 years later. It’s funny how it worked out. Bob and I were friends and we’d skate together a lot. We grew up skating together, learning and having fun. We had a crew. We’d skate street, ramps and bowls. That was in late ’89. Bob used to come to Rio de Janeiro to spend his vacations because his dad lived in Rio, but he was raised in Sao Paolo, with his mom. When he was in Rio, we were hanging out all the time, skating and going to the beach and partying. We were just skating as hard as we could.

Where were you skating?
By that time, we had a couple of gnarly new bowls in Rio. One was Arpoador. It was super deep. You’ve been there. It was a super nice kidney. There was nothing else to skate that had vert. That was our vert ramp. That’s how we learned a bunch of things. We grew up skating bowls. Arpoador was the best bowl I ever rode. It’s 16 years old now, and in bad condition because of the weather.

I remember seeing a video where they had a guy hanging from a crane on a perfect metal radius.
It was a compass. That was the Rio Sul Bowl.

It was a perfect circle in the deep end and the shallow. When we rode it, we thought it was the best pool on the planet.
It was like marble. It was a new surface they had come up with. It was nice when it was brand new. Right after that was the Danger bowl. After they were done with the Danger bowl, they built the Rio Sul Bowl. That was a super gnarly, perfect spot. One bowl was by the beach near a really nice surf spot. It’s super hard to ride. The other bowl was between the highways. There was a lot of traffic there all day. I used to live close to Rio Sul, so that was my pool for a long time. With the metal coping, it rides like a vert ramp.

Bob was telling me that you were better than him when you two first met.
I think it was because, back in those days, we didn’t used to compare ourselves. Things changed a lot. We have different styles. Bob and I were skating when there were no ramps or bowls. We were just skating the streets. We were skating new spots and jumping down stairs. We were doing kickflips and ollies up stairs.

You’re a few years older than Bob.
Yeah, and Bob likes to throw himself into a lot of gnarly tricks. He tries really hard. He was like that before, too, but he wasn’t as consistent as he is now. I liked to try hard, but I was consistent then. We were going to contests and learning new tricks. Maybe I was doing better than him in contests for a little while.

You were consistent.
I used to land more tricks than him in a contest. You have to make your run. That’s how you got through it. He was trying hard, but he wasn’t as consistent as he is today. So that might be why he said that. I was riding more bowls back in the day. At first, I was better in the bowls than he was.

You were the local rider.
I was the local and he was the weekend rider. I used to skate a lot. We were skating all over Brazil. We went to all the main contests, and that’s where I met more of Bob’s family. Bob’s sister used to go to Rio a lot.

What other skaters were part of the scene?
Lincoln has been part of the scene since the beginning. He was the one that really inspired us. He’s a great role model as a person, a skateboarder and a professional. He has perfect airs. I’ve never seen such a perfect air. You can learn a lot from seeing Lincoln skate vert. He’s one of the gnarliest guys out there. Sandro Dias is another guy we grew up with. He’s the huge backside air guy. He had the crazed style with fast, high, solid tricks. We grew up seeing each other riding. We each had our own personalities, and we each went our own direction, but it was all skating.

I think the first skateboarder to come to the States from Brazil was Lincoln in ’89. I didn’t meet Bob until ’95 at the Slam City Jam. When did you and Sandro come over to the States?
I came over in 2000. I’d never been to California before, and that was a dream come true, for sure.

Let’s go back a little bit. You’re riding the streets and bowls with your crew in Brazil. What happened next?
In ’93, I was teaching kids how to skateboard at the Rio Sul Bowl. It was set up through the city. We had a nice program with another gnarly rider from Brazil, Come Rato. He’s a gnarly bowlrider. But the city stopped the program, so I wasn’t making any money. I was thinking about going to school, but I was motivated by exercise. I just wanted to skateboard and surf. My dad is a Capoeira master in martial arts, so I learned from him. Then I went surfing and that made me quit Capoeira for a little while. I was surfing, but there weren’t many waves, so then I saw skateboarding. I realized I didn’t need to wait for waves. With skateboarding, there are waves all the time. I got into skating through my mom and dad giving me a board.

How old were you when you got your first skateboard?
I was five years old. It had handlebars at first, but I broke those off and that was my skateboard. I would skate up and down the street, and then I was skating to go surf. I fell in love with skateboarding when I was around 12 years old. There was a lady that worked with my parents and she moved to America, so I asked her to send me a skateboard. She sent me a brand new Powell-Peralta Steve Caballero with those street Bones. I couldn’t believe it. I was used to riding these ghetto boards. Then I had this Powell Peralta with a big dragon on top and the grip tape and the wheels. I was ready to go. I couldn’t do anything but skate.

I know there’s a lot of crime in Brazil. Did anyone try to steal your Powell-Peralta board from you?
They do steal a lot of stuff in Brazil, but skateboarding is too small a target. They don’t know how big a Powell-Peralta board is. If they had known, they might have taken it from me, but I knew those kids. I grew up on the streets with them. That’s another good thing about skateboarding. You grow up on the streets. You’re part of the streets. You know what’s going on. You’re not in your room at your house. You’re on public terrain all the time. You learn to deal with the streets. You know who’s stealing. You know them. They know you. You form a relationship with the ghetto.

Who else were you skating with in Brazil?
As far as other Brazilian skaters, Nilton is a guy I watched as I was growing up street skating. He’s such a nice guy and he’s so impassioned by skateboarding. There’s also Og De Souza who is part of the Hurley team now. He’s part of my family. He teaches me a lot from his skating. He makes me try hard when I’m skating, just by seeing how happy he is and how hard it is, but it doesn’t even seem hard to him. That makes me try even harder. As Brazilians, skateboarding is our deal.