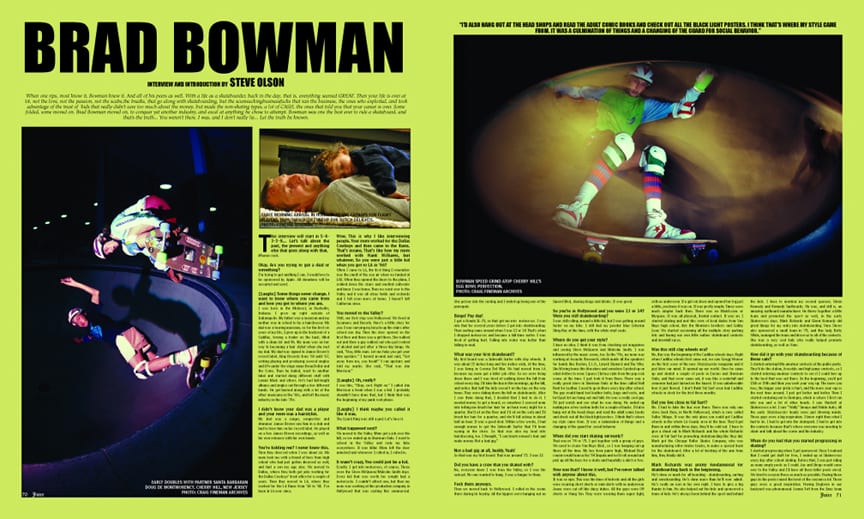 When one rips, most know it, Bowman knew it. And all of his peers as well. With a life as a skateboarder, back in the day, that is, everything seemed GREAT. Then your life is over at 18, not the love, not the passion, not the scabs, the breaks, that go along with skateboarding, but the scumsuckingbusinessfucks that ran the business, the ones who exploited, and took advantage of the trust of kids that really didn’t care too much about the money, but made the non-skating types, a lot of CASH, the ones that told you that your career is over. Some folded, some moved on. Brad Bowman moved on, to conquer yet another industry, and excel at anything he chose to attempt. Bowman was one the best ever to ride a skateboard, and that’s the truth… You weren’t there. I was, and I don’t really lie… Let the truth be known.

This interview will start in 5-4-3-2-8. Let’s talk about the past, the present and anything else that goes along with that.
iPhones rock.

Okay. Are you trying to get a deal or something?
I’m trying to get anything I can. I would love to be sponsored by Apple. All donations will be accepted and used.

[Laughs] Some things never change. I want to know where you came from and how you got to where you are.
I was born in the Midwest, in Rushville, Indiana. I grew up right outside of Indianapolis. My father was a musician and my mother was in school to be a hairdresser. My dad was a touring musician, so for the first six years of my life, I grew up in the backseat of a Cadillac, towing a trailer on the back, filled with a drum kit and PA. My mom was on her way to becoming a hair stylist when she met my dad. My dad was signed to James Brown’s record label, King Records from ’64 until ’67, writing, playing and producing several singles and LPs under the stage name Beau Dollar and the Coins. Then he bailed, went to another label and started doing different stuff with Lonnie Mack and others. He’s had full-length albums and singles out through a few different bands. He got burned along with a lot of the other musicians in the ’60s, and left the music industry in the late ’70s.

I didn’t know your dad was a player and your mom was a hairstylist.
My dad was a singer, songwriter and drummer. James Brown saw him in a club and had to have him on his record label. He played on a few James Brown recordings, as well as his own releases with his own bands.

You’re kidding me? I never knew this.
Then they divorced when I was about six. My mom took me with a friend of hers from high school who had just gotten divorced as well, and had a son my age also. We moved to Dallas, where they both got jobs working for the Dallas Cowboys’ front office for a couple of years. Then they moved to LA, where they worked for the L.A. Rams from ’66 to ’68. I’ve been in L.A. ever since.

Wow. This is why I like interviewing people. Your mom worked for the Dallas Cowboys and then came to the Rams. That’s insane. That’s like how my mom worked with Hank Williams, but whatever. So you were just a little kid when you got to L.A. in ’66?
When I came to LA, the first thing I remember was the smell of the sea air when we landed at LAX. When they opened the doors to the plane, I walked down the stairs and smelled saltwater and knew I was home. Then we went over to the Valley and it was all citrus fields and orchards and I felt even more at home. I haven’t left California since.

You moved to the Valley?
Well, our first stop was Hollywood. We lived at Sycamore and Beverly. Here’s a little story for you: I was carrying my bicycle up the stairs after school one day. Then the door opened on the first floor and there was a girl there. She walked out and then a guy walked out who just reeked of alcohol and pot after a three-day binge. He said, “Hey, little man. Let me help you get your bike upstairs.” I turned around and said, “Get away from me, you freak!” I ran upstairs and told my auntie. She said, “That was Jim Morrison.”

[Laughs] Oh, really?
I was like, “Okay, cool. Right on.” I called Jim Morrison a freak when I was a kid. I probably shouldn’t have done that, but I think that was the beginning of my punk rock phase.

[Laughs] I think maybe you called it like it was.
The Lizard King was still a god. Let’s face it.

What happened next?
We moved to the Valley. Mom got a job over the hill, so we ended up in Sherman Oaks. I went to school in the Valley and rode my bike everywhere. It was killer. Mom left the door unlocked and whenever I rolled in, I rolled in.

It wasn’t crazy. You could just be a kid.
Exactly. I got into motocross, of course. Those were the Steve McQueen/Malcolm Smith days. Every kid that was worth his weight had a motorcycle. I couldn’t afford one, but then my mom was working at this production company in Hollywood that was casting this commercial. She got me into the casting and I ended up being one of the principals.

Bingo! Pay day!
I got a Honda SL-70, so that got me into motocross. I was into that for several years before I got into skateboarding. Then surfing came around when I was 13 or 14. That’s when I dropped motocross and became a full-time surfer. I was tired of getting hurt. Falling into water was better than falling in mud.

What was your first skateboard?
My first board was a Sidewalk Surfer with clay wheels. It was about 22 inches long and five inches wide. At the time, I was living in Corona Del Mar. We had moved from L.A. because my mom got a killer job offer. So we were living down there and I was tired of walking down the hill from school every day. I’d take the bus in the mornings, up the hill, and notice that half the kids weren’t on the bus on the way home. They were sliding down the hill on skateboards. After I saw them doing that, I decided that I had to do it. I needed money to get a board, so somehow I coerced mom into letting me brush her hair for an hour every night for a quarter. She’d sit on the floor and I’d sit on the sofa and I’d brush her hair for a quarter, and she’d fall asleep in about half an hour. It was a good deal. Within a few weeks, I had enough money to get the Sidewalk Surfer that I’d been eyeing in the store. That was also my lead into hairdressing, too. I thought, “I can brush women’s hair and make money. Not a bad gig.”

Did you have a crew that you skated with?
No, everyone knew I was from the Valley, so I was the outcast. No one wanted to hang. I was a fungus to them.

Fuck them anyways.
Then we moved back to Hollywood. I rolled in the scene there during its heyday. All the hippies were hanging out on Sunset Blvd, sharing drugs and drinks. It was great.

So you’re in Hollywood and you were 13 or 14? Were you still skateboarding?
I was still rolling around a little bit, but I was getting around faster on my bike. I still had my powder blue Schwinn Sting-Ray, at the time, with the white vinyl seats.

Where do you get your style?
I have no idea. I think it was from checking out magazines and seeing Steve McQueen and Malcolm Smith. I was influenced by the music scene, too. In the ’70s, my mom was working at Acoustic Research, which made all the speakers for bands like Boston, E.L.O., Lynyrd Skynyrd and The Who. She’d bring home this literature and somehow I picked up on what clothes to wear. I guess I bit my style from the pop rock scene at the time. I just took it from there. There was a really great store in Sherman Oaks at the time called Hell Bent for Leather. I used to go in there every day after school. The guy would hand tool leather belts, bags and vests, and he’d just let me hang out and talk. He was a really cool guy. I’d just watch and see what he was doing. He ended up making me a few custom belts for a couple of bucks. I’d also hang out at the head shops and read the adult comic books and check out all the black light posters. I think that’s where my style came from. It was a culmination of things and a changing of the guard for social behavior.

When did you start skating seriously?
That was in ’74 or ’75. I got together with a group of guys. We used to cruise Van Nuys Blvd., so I was hanging out up there all the time. My boy from junior high, Michael Diaz’ cousin would loan us his ’64 Impala and we’d roll around and pick up all the boys for a skate and hopefully a skirt or two.

How was that? I know it well, but I’ve never talked with anyone about this.
It was so epic. This was the time of hotrods and all the girls were wearing short shorts or mini skirts with no underwear. Jeans were cut off like daisy dukes. All the guys wore OP shorts or Hang Ten. They were wearing them super tight, with no underwear. If a girl sat down and opened her leg just a little, you knew it was on. It was pretty simple. Times were much simpler back then. There was no Match.com or Myspace. It was all physical, frontal contact. It was on. I started skating and met this crew of local dudes from Van Nuys High School, like the Monteiro brothers and Gabby Leon. We started sessioning all the multiple-story parking lots and having our own little outlaw skateboard contests and downhill races.