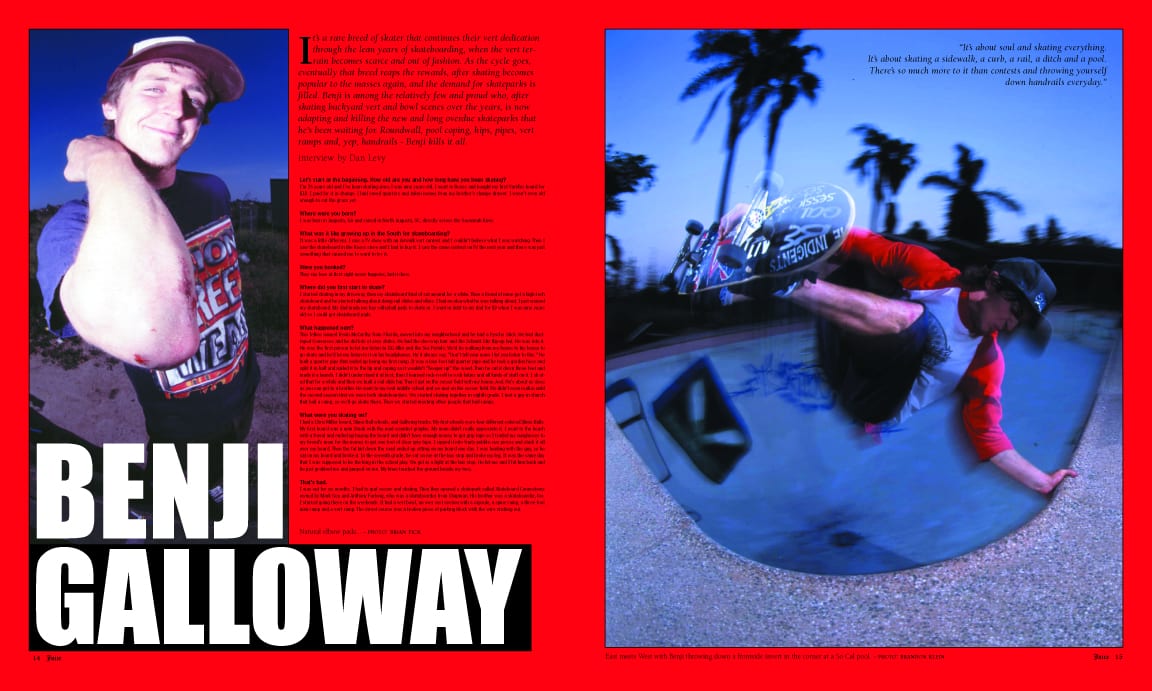 It’s a rare breed of skater that continues their vert dedication through the lean years of skateboarding, when the vert terrain becomes scarce and out of fashion. As the cycle goes, eventually that breed reaps the rewards, after skating becomes popular to the masses again, and the demand for skateparks is filled. Benji is among the relatively few and proud who, after skating backyard vert and bowl scenes over the years, is now adapting and killing the new and long overdue skateparks that he’s been waiting for. Roundwall, pool coping, hips, pipes, vert ramps and, yep, handrails – Benji kills it all.

“IT’S ABOUT SOUL AND SKATING EVERYTHING. IT’S ABOUT SKATING A SIDEWALK, A CURB, A RAIL, A DITCH AND A POOL. THERE’S SO MUCH MORE TO IT THAN CONTESTS AND THROWING YOURSELF DOWN HANDRAILS EVERYDAY.”

Let’s start at the beginning. How old are you and how long have you been skating?
I’m 26 years old and I’ve been skating since I was nine years old. I went to Roses and bought my first Variflex board for $18. I paid for it in change. I had saved quarters and taken money from my brother’s change drawer. I wasn’t even old enough to cut the grass yet.

Where were you born?
I was born in Augusta, GA and raised in North Augusta, SC, directly across the Savannah River.

What was it like growing up in the South for skateboarding?
It was a little different. I saw a TV show with an Airwalk vert contest and I couldn’t believe what I was watching. Then I saw the skateboard in the Roses store and I had to buy it. I saw the same contest on TV the next year and there was just something that caused me to want to try it.

Were you hooked?
They say love at first sight never happens, but it does.

Where did you first start to skate?
I started skating in my driveway, then my skateboard kind of sat around for a while. Then a friend of mine got a high-tech skateboard and he started talking about doing rail slides and ollies. I had no idea what he was talking about. I just cruised my skateboard. My dad made me buy volleyball pads to skate in. I went in debt to my dad for $9 when I was nine years old so I could get skateboard pads.

What happened next?
This fellow named Kevin McCarthy from Florida, moved into my neighborhood and he had a Psycho Stick. He had duct-taped Converses and he did lots of sess slides. He had the doo-wop hair and the Schmitt Stix flip-up hat. He was into it. He was the first person to let me listen to GG Allin and the Sex Pistols. We’d be walking from my house to his house to go skate and he’d let me listen to it on his headphones. He’d always say, “Don’t tell your mom I let you listen to this.” He built a quarter pipe that ended up being my first ramp. It was a four-foot tall quarter pipe and he took a garden hose and split it in half and nailed it to the lip and coping so it wouldn’t “booger up” the wood. Then he cut it down three feet and made it a launch. I didn’t understand it at first, then I learned rock-n-roll to rock fakies and all kinds of stuff on it. I skated that for a while and then we built a rail slide bar. Then I got on the soccer field with my homie Joel. He’s about as close as you can get to a brother. He went to my rival middle school and we met on the soccer field. We didn’t even realize until the second season that we were both skateboarders. We started skating together in eighth grade. I met a guy in church that had a ramp, so we’d go skate there. Then we started meeting other people that had ramps.