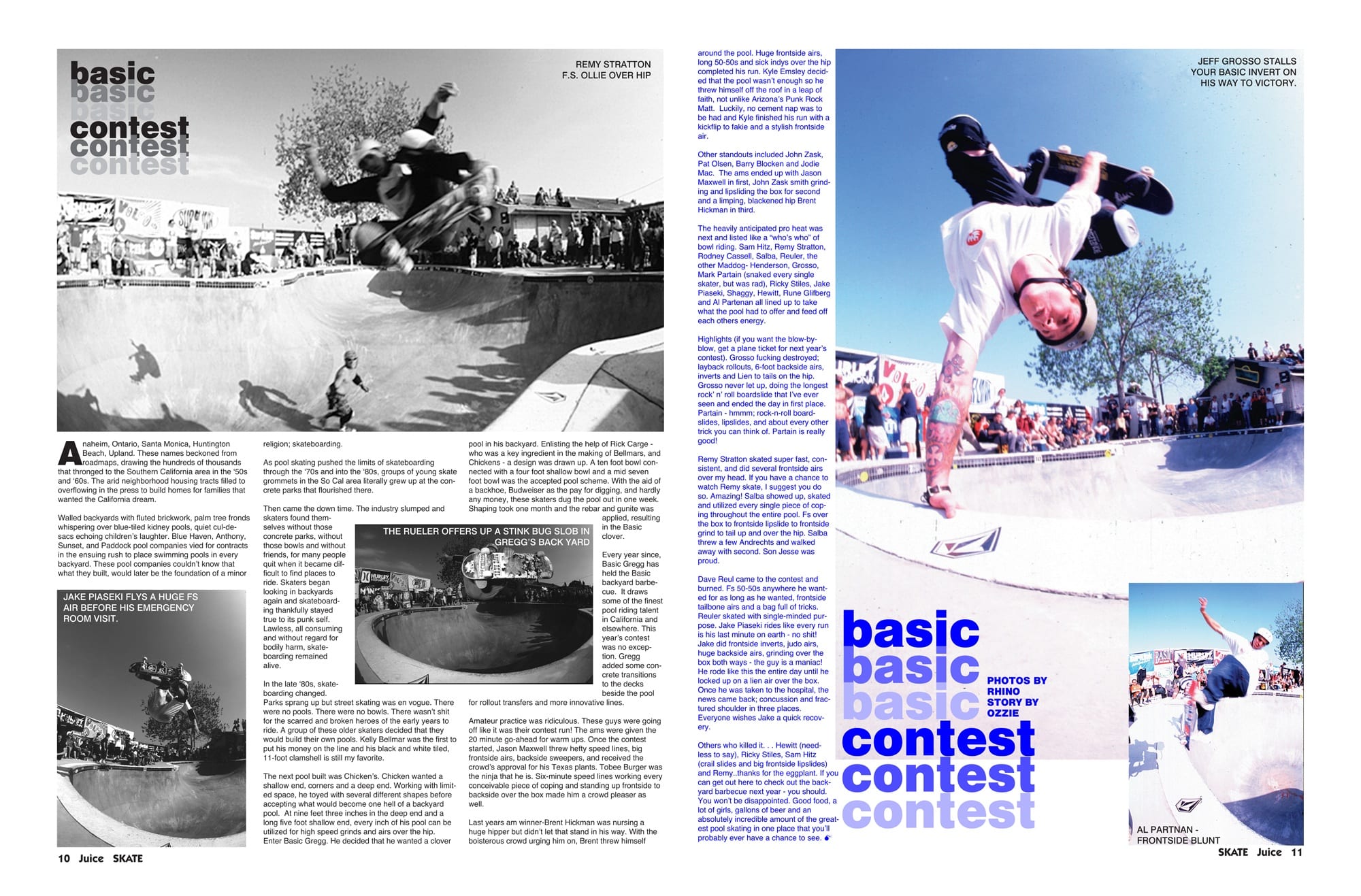 Anaheim, Ontario, Santa Monica, Huntington Beach, Upland… These names beckoned from road maps, drawing the hundreds of thousands that thronged to the Southern California area in the ‘50s and ‘60s. The arid neighborhood housing tracts filled to overflowing in the press to build homes for families that wanted the California dream.

Walled backyards with fluted brickwork, palm tree fronds whispering over blue-tiled kidney pools, quiet cul-de-sacs echoing children’s laughter. Blue Haven, Anthony, Sunset, and Paddock pool companies vied for contracts in the ensuing rush to place swimming pools in every backyard. These pool companies couldn’t know that what they built, would later be the foundation of a minor religion; skateboarding.

As pool skating pushed the limits of skateboarding through the ‘70s and into the ‘80s, groups of young skate grommets in the So Cal area literally grew up at the concrete parks that flourished there.

Then came the down time. The industry slumped and skaters found themselves without those concrete parks, without those bowls and without friends, for many people quit when it became difficult to find places to ride. Skaters began looking in backyards again and skateboarding thankfully stayed true to its punk self.  Lawless, all consuming and without regard for bodily harm, skateboarding remained alive.

In the late ‘80s, skateboarding changed. Parks sprang up, but street skating was en vogue. There were no pools. There were no bowls. There wasn’t shit for the scarred and broken heroes of the early years to ride. A group of these older skaters decided that they would build their own pools. Kelly Bellmar was the first to put his money on the line and his black and white tiled, 11-foot clamshell is still my favorite.

The next pool built was Chicken’s. Chicken wanted a shallow end, corners and a deep end. Working with limited space, he toyed with several different shapes before accepting what would become one hell of a backyard pool.  At nine feet three inches in the deep end and a long five-foot shallow end, every inch of his pool can be utilized for high speed grinds and airs over the hip.

Enter Basic Gregg. He decided that he wanted a clover pool in his backyard. Enlisting the help of Rick Carje – who was a key ingredient in the making of Bellmar’s, and Chicken’s – a design was drawn up. A ten-foot bowl connected with a four-foot shallow bowl and a mid seven-foot bowl was the accepted pool scheme. With the aid of a backhoe, Budweiser as the pay for digging, and hardly any money, these skaters dug the pool out in one week. Shaping took one month and the rebar and gunite was applied, resulting in the Basic clover.

Every year since, Basic Gregg has held the Basic backyard barbecue. It draws some of the finest pool riding talent in California and elsewhere. This year’s contest was no exception. Gregg added some concrete transitions to the decks beside the pool for rollout transfers and more innovative lines.

Amateur practice was ridiculous. These guys were going off like it was their contest run! The ams were given the 20 minute go-ahead for warm ups. Once the contest started, Jason Maxwell threw hefty speed lines, big frontside airs, backside sweepers, and received the crowd’s approval for his Texas plants. Toby Burger was the ninja that he is. Six-minute speed lines working every conceivable piece of coping and standing up frontside to backside over the box made him a crowd pleaser as well.

Last years am winner-Brent Hickman was nursing a huge hipper, but didn’t let that stand in his way. With the boisterous crowd urging him on, Brent threw himself around the pool. Huge frontside airs, long 50-50s and sick indys over the hip completed his run. Kyle Emsley decided that the pool wasn’t enough so he threw himself off the roof in a leap of faith, not unlike Arizona’s Punk Rock Matt. Luckily, no cement nap was to be had and Kyle finished his run with a kickflip to fakie and a stylish frontside air.

Other standouts included John Zask, Pat Olsen, Barry Blocken and Jodie Mac.  The ams ended up with Jason Maxwell in first, John Zask smith grinding and lipsliding the box for second and a limping, blackened hip Brent Hickman in third.

The heavily anticipated pro heat was next and listed like a “who’s who” of bowl riding. Sam Hitz, Remy Stratton, Rodney Cassell, Salba, Reuler, the other Maddog- Henderson, Grosso, Mark Partain (snaked every single skater, but was rad), Ricky Stiles, Jake Piasecki, Shaggy, Hewitt, Rune Glifberg and Al Partanen all lined up to take what the pool had to offer and feed off each others energy.

Highlights (if you want the blow-by-blow, get a plane ticket for next year’s contest). Grosso fucking destroyed; layback rollouts, 6-foot backside airs, inverts and lien to tails on the hip. Grosso never let up, doing the longest rock n’ roll boardslide that I’ve ever seen and ended the day in first place.  Partain – hmmm; rock-n-roll boardslides, lipslides and about every other trick you can think of. Partain is really good!

Remy Stratton skated super fast, consistent, and did several frontside airs over my head. If you have a chance to watch Remy skate, I suggest you do so. Amazing! Salba showed up, skated and utilized every single piece of coping throughout the entire pool. Frontside over the box to frontside lipslide to frontside grind to tail up and over the hip. Salba threw a few Andrechts and walked away with second. Son Jesse was proud.

Dave Reul came to the contest and burned. Fs 50-50s anywhere he wanted for as long as he wanted, frontside tailbone airs and a bag full of tricks. Reuler skated with single-minded purpose. Jake Piaseki rides like every run is his last minute on earth – no shit! Jake did frontside inverts, judo airs, huge backside airs, grinding over the box both ways – the guy is a maniac!

He rode like this the entire day until he locked up on a lien air over the box. Once he was taken to the hospital, the news came back; concussion and fractured shoulder in three places. Everyone wishes Jake a quick recovery.

Others who killed it. . . Hewitt (needless to say), Ricky Stiles, Sam Hitz (crail slides and big frontside lipslides) and Remy..thanks for the eggplant. If you can get out here to check out the backyard barbecue next year – you should. You won’t be disappointed. Good food, a lot of girls, gallons of beer and an absolutely incredible amount of the greatest pool skating in one place that you’ll probably ever have a chance to see.