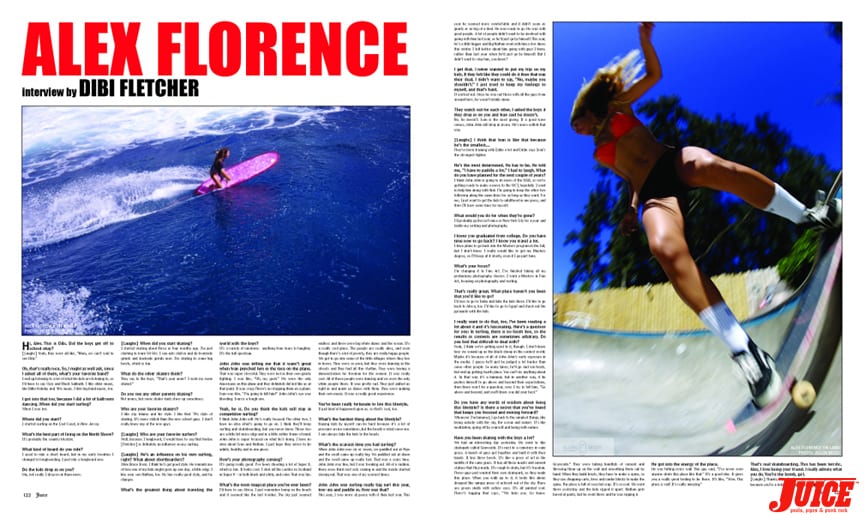 Hi, Alex. This is Dibi. Did the boys get off to school okay?
[Laughs] Yeah, they were all like, ‘Mom, we can’t wait to see Dibi.’

Oh, that’s really nice. So, I might as well ask, since I asked all of them, what’s your favorite band?
I end up listening to a lot of what the kids are listening to, so I’d have to say Ozzy and Black Sabbath. I like older music, like Billie Holiday and ’40s music. I like big band music, too.

I got into that too, because I did a lot of ballroom dancing. When did you start surfing?
When I was ten.

“I started surfing on the East Coast, in New Jersey.”

Where did you start?
I started surfing on the East Coast, in New Jersey.

What’s the best part of living on the North Shore?
It’s probably the country lifestyle.

What kind of board do you ride?
I used to ride a short board, but in my early twenties I changed to longboarding. I just ride a longboard now.

[Laughs] When did you start skating?
I started skating about three or four months ago. I’m just starting to learn 50-50s. I can axle stall in and do frontside grinds and backside grinds now. I’m skating in some big bowls, which is fun.

What do the other skaters think?
They say to the boys, ‘That’s your mom? I wish my mom skated.’

Do you see any other parents skating?
Not moms, but some skater dads show up sometimes.

Who are your favorite skaters?
I like Jay Adams and his style. I like that ’70s style of skating. It’s more stylish than the new school guys. I don’t really know any of the new guys.

[Laughs] Who are your favorite surfers?
Well, because I longboard, I would have to say that Herbie [Fletcher] is definitely an influence on my surfing.

[Laughs] He’s an influence on his own surfing, right? What about shortboarders?
I like Bruce Irons. I think he’s got good style. He reminds me of how one of my kids might grow up one day, a little edgy. I like your son Nathan, too. He has really good style, and he charges.

What’s the greatest thing about traveling the world with the boys?
It’s a variety of emotions: anything from tears to laughter. It’s the full spectrum.

John John was telling me that it wasn’t great when Ivan punched him in the face on the plane.
That was super stressful. They were lost in their own gnarly fighting. I was like, ‘Oh, my gosh.’ We were the only Americans on this plane and they definitely did not like us at that point. It was crazy. There’s no stopping them on a plane. Ivan was like, ‘I’m going to kill him!’ John John’s eye was bleeding. Ivan is a tough one.

Yeah, he is. Do you think the kids will stay in competitive surfing?
I think John John will. He’s really focused. The other two, I have no idea what’s going to go on. I think they’ll keep surfing and skateboarding, but you never know. Those two are a little bit more edgy and in a little wilder frame of mind. John John is super focused on what he’s doing. I have no idea about Ivan and Nathan. I just hope they arrive to be adults, healthy and in one piece.

How’s your photography coming?
It’s going really good. I’ve been shooting a lot of Super 8, which is fun. It looks cool. I shot all the castles in Scotland in Super 8, in both black and white, and color. That was fun.

What’s the most magical place you’ve ever been?
I’d have to say Africa. I just remember being on the beach and it seemed like the last frontier. The sky just seemed endless and there were big white dunes and the ocean. It’s a really cool place. The people are really alive, and even though there’s a lot of poverty, they are really happy people. We got to go into some of the little villages where they live in boxes. They were so poor, but they were dancing in the streets and they had all this rhythm. They were having a demonstration for freedom for the women. It was really cool. All of these people were dancing and we were the only white people there. It was pretty rad. They just pulled us right in and made us dance with them. They were making their own music. It was a really great experience.

You’ve been really fortunate to live this lifestyle.
It just kind of happened upon us, so that’s cool, too.

What’s the hardest thing about the lifestyle?
Raising kids by myself can be hard because it’s a lot of pressure on me sometimes, but the beach is what saves me. I can always take the kids to the beach.