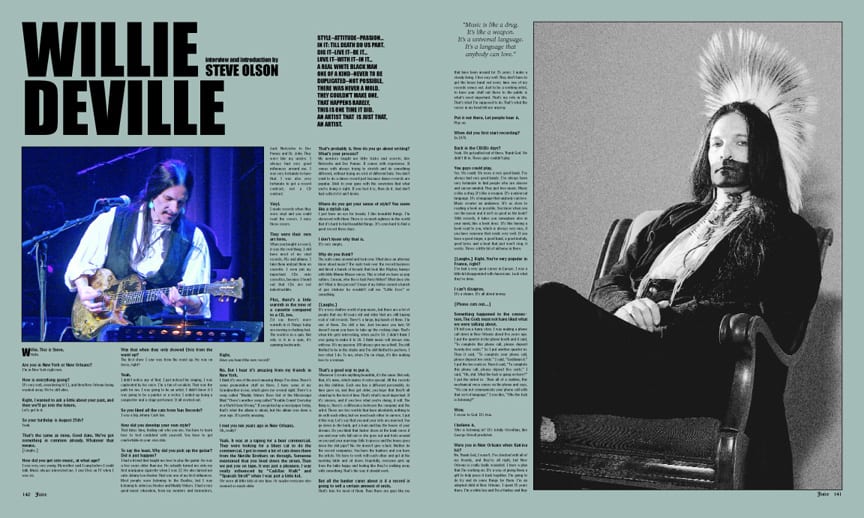 Style–Attitude–Passion… In it: till death do us Part. Dig it–Live it–Be it… Love it–With it–In it… A real white black man. One of a kind, never to be duplicated, not possible. There was never a mold. They couldn’t make one. That happens rarely. This is one time it did. An artist that is just that, AN ARTIST.

“MUSIC IS LIKE A DRUG. IT’S LIKE A WEAPON. IT’S A UNIVERSAL LANGUAGE. IT’S A LANGUAGE THAT ANYBODY CAN LOVE.”

Willie. This is Steve.
Hello.

How is everything going?
It’s very well, considering 9/11, and then New Orleans being washed away. We’re still alive.

Right. I wanted to ask a little about your past, and then we’ll go into the future.
Let’s get to it.

So your birthday is August 25th?
Yeah.

That’s the same as mine. Good date. We’ve got something in common already. Whatever that means.
[Laughs.]

How did you get into music, at what age?
I was very, very young. My mother said I sang before I could talk. Music always interested me. I saw Elvis on TV when I was six.

Yeah.
I didn’t notice any of that. I just noticed his singing. I was captivated by his voice. I’m a fan of vocalists. That was the path for me. I was going to be an artist. I didn’t know if I was going to be a painter or a writer. I ended up being a songwriter and a stage performer. It all worked out.

So you liked all the cats from Sun Records?
I was a big Johnny Cash fan.

How did you develop your own style?
That takes time, finding out who you are. You have to learn how to feel confident with yourself. You have to get comfortable in your own skin.

To say the least. Why did you pick up the guitar? Did it just happen?
I had a friend that taught me how to play the guitar. He was a few years older than me. He actually turned me onto my first marijuana cigarette when I was 12. He also turned me onto Johnny Lee Hooker. That was one of my first influences. Most people were listening to the Beatles, but I was listening to John Lee Hooker and Muddy Waters. I had a very good music education, from my mentors and tormentors, Jack Nietzsche to Doc Pomus and Dr. John. They were like my uncles. I always had very good influences around me. I was very fortunate to have that. I was also very fortunate to get a record contract; not a CD contract.

Vinyl.
I made records when they were vinyl and you could read the covers. I miss those covers.

They were their own art form.
When you bought a record, it was the real thing. I still have most of my vinyl records, 45s and albums. I take them and put them on cassette. I even put my important CDs onto cassettes, because I found out that CDs are not indestructible.

Plus, there’s a little warmth in the tone of a cassette compared to a CD, too.
I’d say there’s more warmth to it. Things today are moving so fucking fast. The world is in a spin. Not only is it in a spin, it’s spinning backwards.

Right.
Have you heard the new record?

No. But I hear it’s amazing from my friends in New York.
I think it’s one of the most amazing things I’ve done. There’s some premonition stuff on there. I have some of my Grandmother in me, which gives me second sight. There’s a song called ‘Muddy Waters Rose Out of the Mississippi Mud.’ There’s another song called ‘Trouble Comin’ Everyday in a World Gone Wrong.’ If you picked up a newspaper today, that’s what the album is about, but the album was done a year ago. It’s pretty amazing.

I met you ten years ago in New Orleans.
Oh, really?

Yeah. It was at a taping for a beer commercial. They were looking for a blues cat to do the commercial. I got to meet a lot of cats down there from the Neville Brothers on through. Someone mentioned that you lived down the street. Then we put you on tape. It was just a pleasure. I was really influenced by ‘Cadillac Walk’ and ‘Spanish Stroll’ when I was just a little kid.
We were all little kids at one time. Or maybe everyone else seemed so much older.

That’s probably it. How do you go about writing? What’s your process?
My mentors taught me little tricks and secrets, like Nietzsche and Doc Pomus. It comes with experience. It comes with always trying to stretch and do something different, without trying on a lot of different hats. You don’t want to do a dance record just because dance records are popular. Stick to your guns with the conviction that what you’re doing is right. If you feel it is, then do it. And don’t fuck with it if it ain’t broke.

I don’t know why that is.
It’s very simple.

Why do you think?
The suits came around and took over. What does an attorney know about music? The suits took over the record business and hired a bunch of broads that look like Playboy bunnys with little Minnie Mouse voices. This is what we have as pop culture. I mean, who the is fuck Paris Hilton? What does she do? What is this person? I hope if my father owned a bunch of gas stations he wouldn’t call me ‘Little Esso’ or something.

[Laughs.]
It’s a very shallow world of pop music, but there are a lot of people that are 40 years old and older that are still buying rock n’ roll records. There’s a large, big bunch of them. I’m one of them. I’m still a fan. Just because you turn 50 doesn’t mean you have to take up the rocking chair. That’s when life gets interesting, when you’re 50. I didn’t think I was going to make it to 30. I think music will always stay with me. It’s my passion. It’ll always give me a thrill. I’m still thrilled to be in the studio and I’m still thrilled to perform. I love what I do. To me, when I’m on stage, it’s like making love to a woman.

That’s a good way to put it.
Whenever I create anything beautiful, it’s the same. Not only that, it’s mine, which makes it extra special. All the records are like children. Each one has a different personality. As time goes on, and they get older, you hope that they’ll all stand up to the test of time. That’s what’s most important. If it’s sincere, and if you love what you’re doing, it will. The thing is, there’s a difference between the company and the artist. Those are two worlds that have absolutely nothing to do with each other, but we need each other to survive. I put it this way. Let’s say that you and your wife are married. You go down to the bank, get a loan and buy the house of your dreams. Do you think that fucker down at the bank cares if you and your wife fall out or she goes out and fools around on you and your marriage falls to pieces and the house goes down the shit pipe? No. He doesn’t give a fuck. Neither do the record companies. You have the bankers and you have the artists. We have to work with each other and get at the meeting table and sit down. Hopefully, everyone gets up from the table happy and feeling like they’re walking away with something. That’s the way it should work.

But all the banker cares about is if a record is going to sell a certain amount of units.
That’s true for most of them. Then there are guys like me that have been around for 25 years. I make a steady living. I live very well. They don’t have to get the brass band out every time one of my records comes out. Just to be a working artist, to have your stuff out there to the public is what’s most important. That’s my role in life. That’s what I’m supposed to do. That’s what the voices in my head tell me anyway.

Put it out there. Let people hear it.
Play on.

When did you first start recording?
In 1976.

Back in the CBGB’s days?
Yeah. We got pulled out of there. Thank God. We didn’t fit in. Those guys couldn’t play.

You guys could play.
Yes. We could. We were a very good band. I’ve always had very good bands. I’ve always been very fortunate to find people who are sincere and career-minded. They just love music. Music is like a drug. It’s like a weapon. It’s a universal language. It’s a language that anybody can love. Music creates an ambiance. It’s as close to reading a book as possible. You know when you see the movie and it isn’t as good as the book? With records, it takes you someplace else in your mind, like a book does. It’s like having a book read to you, which is always very nice, if you have someone that reads very well. If you have a good singer, a good band, a good melody, good lyrics and a beat that just won’t stop, it works. Throw a little bit of alchemy in there.

[Laughs.] Right. You’re very popular in France, right?
I’ve had a very good career in Europe. I was a little bit disappointed with Americans. Look what they’ve done.

I can’t disagree.
It’s a shame. It’s all about money.

FOR THE REST OF THE STORY, ORDER ISSUE #61 BY CLICKING HERE…