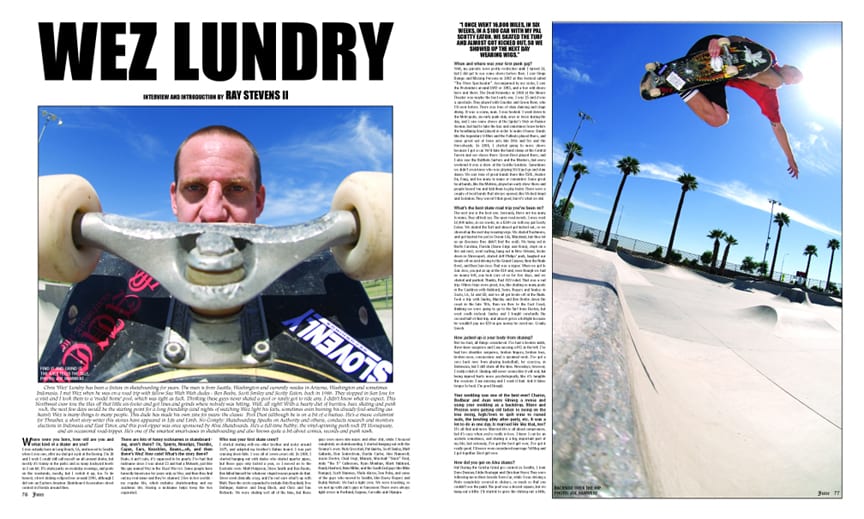 Chris ‘Wez’ Lundry has been a fixture in skateboarding for years. The man is from Seattle, Washington and currently resides in Arizona, Washington and sometimes Indonesia. I met Wez when he was on a road trip with fellow Sea Wah Wah dudes – Ben Beebe, Scott Smiley and Scotty Eaton, back in 1986. They stopped in San Jose for a visit and I took them to a ‘model home’ pool, which was super tight. Thinking these guys never skated a pool or rarely got to ride any, I didn’t know what to expect. This Northwest crew tore the tiles off that little six-footer and got lines and grinds where nobody was hitting. Well, all right! With a hearty diet of burritos, beer, skating and punk rock, the next few days would be the starting point for a long friendship. Wez is many things to many people. This dude has made his own zine for years: the classic Pool Dust (although he is on a bit of a hiatus). He’s a music columnist for Thrasher, a short story writer (his stories have appeared in Life and Limb, No Comply: Skateboarding Speaks on Authority and others), conducts research and monitors elections in Indonesia and East Timor, and this pool-ripper was once sponsored by Alva Skateboards. He’s a full-time hubby, a vinyl-spinning punk rock DJ, and an occasional road-tripper. He’s one of the smartest smart-asses in skateboarding and also knows quite a bit about comics, records and punk rawk.

“I ONCE WENT 16,000 MILES, IN SIX WEEKS IN A $100 CAR WITH MY PAL SCOTTY EATON. WE SKATED THE TURF AND ALMOST GOT KICKED OUT, SO WE SHOWED UP THE NEXT DAY WEARING WIGS.”

Where were you born, how old are you and what kind of a skater are you?
I was actually born in Long Beach, CA, and moved to Seattle when I was one, after my dad got a job at the Boeing. I’m 38 and I wish I could still call myself an all-around skater, but mostly it’s tranny in the parks and as many backyard bowls as I can hit. It’s skate parks on weekday evenings, and pools on the weekends, mostly, but I switch it up, too. To be honest, street skating eclipsed me around 1990, although I did win an Eastern Amateur Skateboard Association street contest in Florida around then.

There are lots of funny nicknames in skateboarding, aren’t there? Ox, Sperm, Noselips, Thumbs, Cajun, Ears, Knuckles, Beans…oh, and then there’s Wez! How cute! What’s the story there?
Dude, it ain’t cute, it’s supposed to be gnarly. I’ve had that nickname since I was about 13 and had a Mohawk, just like the guy named Wez in the Road Warrior. Some people have honestly known me for years only as Wez, and then they find out my real name and they’re stunned. I live in two worlds – my regular life, which includes skateboarding and my academic life. Having a nickname helps keep the two separated.

Who was your first skate crew?
I started skating with my older brother and sister around 1975, and adopted my brother’s Bahne board. I was just cruising down hills. I was all of seven years old. In 1980, I started hanging out with dudes who skated quarter pipes, but those guys only lasted a year, so I moved on to the Eastside crew: Matt Helgeson, Steve Smith and Ben Beebe. Ben killed himself for whatever stupid reason people do that. Steve went clinically crazy, and I’m not sure what’s up with Matt. Then the circle expanded to include Rob Brasfield, Trev Dellinger, Andrew and Doug Bloch, and Chris and Tom Richards. We were skating vert all of the time, but those guys were more into music and other shit, while I focused completely on skateboarding. I started hanging out with the Granny’s crew: Nels Grevstad, Pat Quirke, Scott Smiley, Matt Gallardo, Ron Soderstrom, Dustin Carter, Alex Nameroff, Aaron Deeter, Chad Vogt, Minnick, Marshall ‘Stack’ Reid, Andy ‘the 5’ Culberson, Ryan Monihan, Mark Hubbard, Randy Hanford, Nate Miller, and the South End guys like Mike Ranquet, Scott Stamnes, Wade Abrew, Tom Peha, and some of the guys who moved to Seattle, like Davey Rogers and Buddy Nichols. We had a tight crew. We were traveling, so we met up with Jak’s guys in Vancouver. There were always tight crews in Portland, Eugene, Corvallis and Olympia.

When and where was your first punk gig?
Well, my parents were pretty restrictive until I turned 16, but I did get to see some shows before then. I saw Oingo Boingo and Missing Persons in 1982 at this festival called ‘The Wave Spectacular’. Accompanied by my sister, I saw the Pretenders around 1982 or 1983, and a few odd shows here and there. The Dead Kennedys in 1984 at the Moore Theater was maybe the best early one. I was 15 and it was a spectacle. They played with Crucifux and Green River, who I’d seen before. There was tons of slam dancing and stage diving. It was a scene, man. I was hooked. I went down to the Metropolis, an early punk club, once or twice during the day, and I saw some shows at the Spider’s Web on Rainier Avenue, but had to take the bus and sometimes leave before the headlining band played in order to make it home. Bands like the legendary U-Men and the Fallouts played there, and some great out of town acts like DOA and Tex and the Horseheads. In 1984, I started going to more shows because I got a car. We’d fake the hand stamp at the Central Tavern and see shows there. Green River played there, and I also saw the Butthole Surfers and the Mentors, but every weekend it was a show at the Gorilla Gardens. Sometimes we didn’t even know who was playing. We’d just go and slam dance. We saw tons of great bands there like TSOL, Husker Du, Fang, and too many to name or remember. Some great local bands, like the Melvins, played an early show there and people booed ’em and told them to play faster. There were a couple of local bands that always opened, like Wicked Angel and Isolation. They weren’t that good, but it’s what we did.

How jacked up is your body from skating?
Not too bad, all things considered. I’ve had a broken ankle, three knee surgeries and I am missing a PCL in the left. I’ve had two shoulder surgeries, broken fingers, broken toes, broken nose, concussions and a sprained neck. I’ve got a sore back now from playing basketball, for exercise, in Indonesia, but I still skate all the time. Nowadays, however, I really relish it. Skating still never seems like it will end, but being injured hurts more psychologically, like it’s tangible the sessions I am missing and I want it bad. And it takes longer to heal. I’m good though.

Your wedding was one of the best ever! Charno, Budbear and Juan were filming a movie and using your wedding as a backdrop. Rhino and Preston were getting old ladies to swing on the tree swing, high/lows to spilt wine to ruined suits, the bowling alley after-party, etc. It was a lot to do in one day. Is married life like that, too?
It’s all that and more. Married life is all about compromise, but it’s easy when you’re really in love. I know I can be an asshole sometimes, and skating is a big, important part of my life, but seriously, I’ve got the best girl ever, I’ve got it really good. I’d never even considered marriage ’til Meg and I got together. Best girl ever.

How did you get on Alva skates?
Ha! During the Gotcha Grind pro contest in Seattle, I took Dave Duncan, Eddie Reatagui and Christian Hosoi. They were following me in their Lincoln Town Car, while I was driving a Pinto completely covered in stickers, so much so that you couldn’t see the paint. The pool was a decent square, but we hung out a little. I’d started to grow the shitwig out a little, grinded the pool, and hung out all weekend. Duncan said stay in touch, so I called him. I’d already started skating for Fallout, which was the team in Seattle, and I’d won a lot of the unsponsored and shop- sponsored vert contests because most of the guys that were better than me were already hooked up. Then Poweredge came out with a full-page photo of me grinding a curb, wearing plaid pants and a Michael Jackson t-shirt. It was 1988 and Michael Jackson was already ironic… I called up Duncan and they were flowing me boards. I was paying $20 for boards, $10 for wheels and getting some gloves, t-shirts, stickers, patches and fanny packs out of the deal – b-team shit, but, dude, it was Alva! Then I got an amateur check out in Poweredge, and then I got fully on the team. Duncan was the best, Daddy Dave and I’d go to LA or San Diego and hang out with him and whoever else was skating: legendary guys – TA, Craig Johnson, John Gibson, Murf, Freddy, Eddie and Hosoi. I’d get stuff to sell to pay for gas and beer, and we’d just skate all the time and party, hang out with girls, it was sick. Duncan took care of me, and everyone else. Thanks, Dave. Alva was great, and when they turned into New School, they sent me a package. I opened it, got bummed on the popsicle situation, called them up and quit. TA got 100% Alva going, and it was a smaller operation, but he still sent me boards. Thanks, TA.

What was it like working at Fallout Skateboards, comics and records in Seattle?
The best! Russ and Janet ruled. When I got hired, they still had skateboards. Russ, Janet and the whole crew kind of brought me up, in a way, and put up with me. Russ is still like an older brother, and we’re still tight. It’s the same with Tom Price. I love that guy. Best guy ever award. The shop was the best. They would always let me have time off to travel or do whatever. Super supportive.

How did you feel about the Grunge movement/craze sweeping Seattle?
Total and utter inane bullshit, a media move to capitalize on the latest fad. And then, a lot of people in Seattle bought into it, made their money, and whatever. There was still a lot of great punk music, and some of the stuff classified as grunge was just great in its own right. There was a superfluous overabundance of shit bands, though.