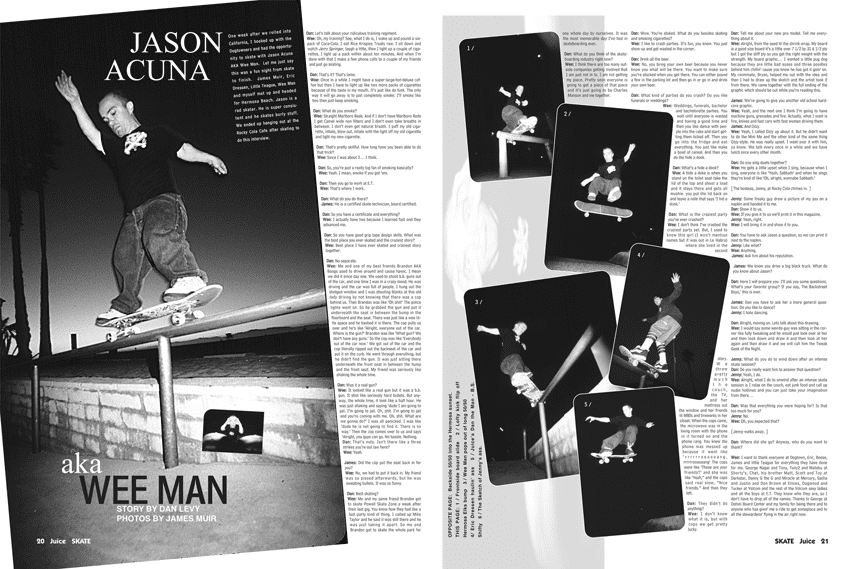 One week after we rolled into California, I hooked up with the Dogtowners and had the opportunity to skate with Jason Acuna AKA Wee Man. Let me just say this was a fun night from skate to finish. James Muir, Eric Dressen, Little Teague, Wee Man and myself met up and headed for Hermosa Beach. Jason is a rad skater. He is super consistent and he skates burly stuff. We ended up hanging out at the Rocky Cola Cafe after skating to do this interview.

Dan: Let’s talk about your ridiculous training regiment.
Wee: Oh, my training? See, what I do is, I wake up and pound a six-pack of Coca-Cola. I eat Rice Krispies Treats raw. I sit down and watch Jerry Springer, laugh a little, then I light up a couple of cigarettes. I light up a pack within about ten minutes. And when I’m done with that I make a few phone calls to a couple of my friends and just go skating.

Dan: That’s it? That’s lame.
Wee: Once in a while I might have a super-large-hot-deluxe coffee but then I have to light up like two more packs of cigarettes because of the taste in my mouth. It’s just like da funk. The only way it will go away is to just completely smoke. I’ll smoke like two then just keep smoking.

“I wake up and pound a six-pack of Coca-Cola. I eat Rice Krispies Treats raw. I sit down and watch Jerry Springer, laugh a little, then I light up a couple of cigarettes. I light up a pack within about ten minutes. And when I’m done with that I make a few phone calls to a couple of my friends and just go skating.”

Dan: That’s pretty skillful. How long have you been able to do that trick?
Wee: Since I was about two… I think.

Dan: So, you’re just a really big fan of smoking basically?
Wee: Yeah. I mean, smoke if you got ’em.

Dan: What do you do there?
James: He is a certified skate technician, board certified.

Dan: So you have a certificate and everything?
Wee: I actually have two because I learned fast and they advanced me.

Dan: No separate.
Wee: Me and one of my best friends Brandon AKA Boogs used to drive around and cause havoc. I mean we did it since day one. We used to shoot b.b. guns out of the car, and one time I was in a crazy mood. He was driving and the car was full of people. I hung out the shotgun window and I was shooting blanks at this old lady driving by not knowing that there was a cop behind us. Then Brandon was like ‘Oh shit!’ The police lights went on. So he grabbed the gun and put it underneath the seat in between the bump# in the floorboard and the seat. There was just like a wee little space and he bashed it in there. The cop pulls us over and he’s like ‘Alright, everyone out of the car. Where is the gun?’ Brandon was like ‘What gun? We don’t have any guns.’ So the cop was like ‘Everybody out of the car now.’ We got out of the car and the cop literally ripped out the backseat of the car and put it on the curb. He went through everything, but he didn’t find the gun. It was just sitting there underneath the front seat in between the hump and the front seat. My friend was seriously like shaking the whole time.

Dan: Was it a real gun?
Wee: It looked like a real gun but it was a b.b. gun. It shot like seriously hard bullets. But anyway, the whole time, it took like a half hour. He was just shaking and saying ‘dude I am going to jail. I’m going to jail. Oh, shit. I’m going to jail and you’re coming with me. Oh, shit. What are we gonna do?’ I was all panicked. I was like ‘dude he is not going to find it. There is no way.’ Then the cop comes over to us and says ‘Alright, you guys can go. No hassle. Nothing.

James: Did the cop put the seat back in for you?
Wee: No, we had to put it back in. My friend was so pissed afterwards, but he was sweating bullets. It was so funny.

Dan: Best skating?
Wee: Me and my same friend Brandon got to skate Powell Skate Zone a week after their last gig. You know how they had like a last party kind of thing. I called up Mike Taylor and he said it was still there and he was just taking it apart. So me and Brandon got to skate the whole park for one whole day by ourselves. It was the most memorable day I’ve had in skateboarding ever.

Dan: What do you think of the skateboarding industry right now?
Wee: I think there are too many outside companies getting involved that I am just not into. I am not getting my piece. Pretty soon everyone is going to get a piece of that piece and it’s just going to be Charles Manson and me together.

Dan: Wow. You’re stoked. What do you besides skating and smoking cigarettes?
Wee: I like to crash parties. It’s fun, you know. You just show up and get wasted in the corner.