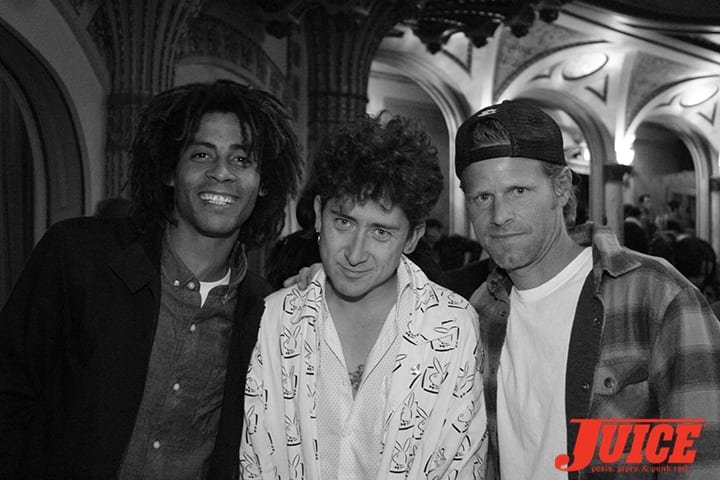 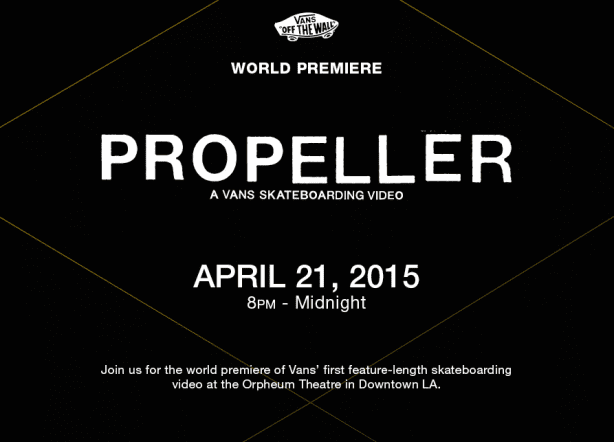 Words and Photos by Dan Levy

Not without mention, Ray Barbee, his son Nolan, the Mattson 2 and John Herndon graced the same stage as Duke Ellington, Ella Fitzgerald, Stevie Wonder, Aretha Franklin, Little Richard, Lena Horne and more, who poured their musical genius on unsuspecting crowds and are now considered some of the most celebrated artists ever to live. The feeling of being at this premiere, along with the larger-than-life moments, had notes of being at a punk rock show as skateboard greatness filled  the screen and overwhelmed the rowdy crowd trick by trick and line by line.

The year was 1966 when the name Van Doren was introduced into the community of skateboarding by the simple act of putting shoes on the feet of Stacy Peralta and Tony Alva who were unknowingly forging the road for what, 49 years later, has become an industry giant. With Steve Van Doren at the helm, fueled by his unwavering passion for skateboarding culture, the idea of putting out a full-length skate video, in this day and age, resonated across every generation of skateboarding and the crowd on hand this night showed appreciation with earth-shaking applause upon Steve’s entrance to the stage. The feeling that the good times are back was a cultural nod to Vans’ 49 years of service to our community. It’s an attitude and ethos that the Van Doren family believe in their hearts and practice everyday in their efforts. Words like loyalty, quality, philanthropy, fun and passion all lend themselves to the spirit of this film and the proof was on the silver screen in the all-or-nothing effort every rider put into it.

Propeller gives hints and insight into the personalities of each Vans skate team rider without masking the insanely raw and gnarly terrain being annihilated throughout the entire film. While highlights would be very easy to list, words in this context wouldn’t do justice to seeing it with your very own eyes. The historical merit coupled with a timeless approach and the level of skating showcased in Propeller will certainly find a home on the top of many favorite skate videos of all time lists.

Vans knows how to throw events and, in their usual classy style, the after party was filled with libations, munchies and entertainment by Ray Barbee, the Mattson 2, John Herndon and Tommy Guerrero jamming it out. The party consumed the back parking lot of the Orpheum Theatre, a place where urban legend and past mythical celebrations have been experienced and now skateboarding has added its own chapter to the folklore. Thank you, Vans! 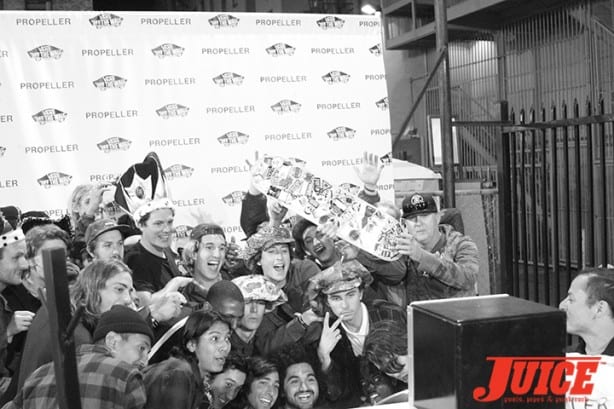 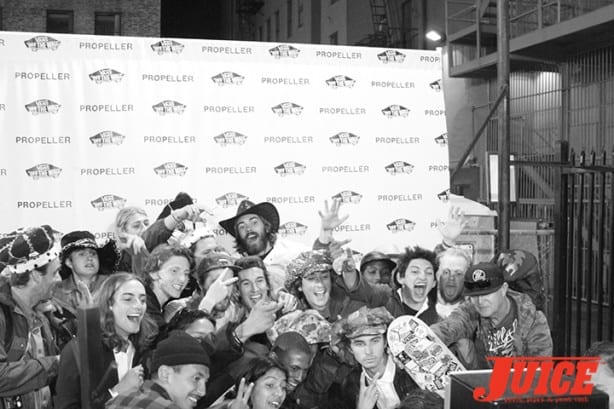 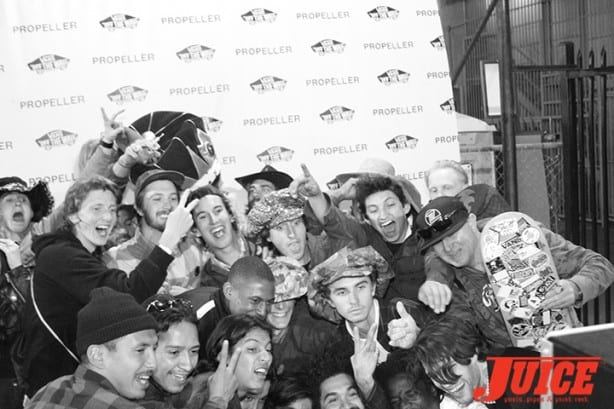 FIND A LOCAL SCREENING NEAR YOU

Vans’ first-ever, feature length global skateboarding video, PROPELLER, saw its highly anticipated world premiere in Los Angeles last night, debuting to hundreds of passionate skateboarding fans in celebration of true skateboarding history. Making a grand entrance in the famous Vans Sk8-Hi car, Godfather of Vans Steve Van Doren proudly took the mic as he introduced the film alongside the illustrious Vans Pro Skate team, a momentous gathering of over four generations of skateboarding on a single stage. Resounding applause filled the theater throughout the showing, fueling the evening with sincere emotion and pride held by loyal fans, industry friends and families, legends, pros and the devoted Vans team. The festivities topped off with a lively after party featuring performances by Ray Barbee and Tommy Guerrero, culinary taste by Pizzanista!, tons of Vans giveaways, and the stars of the film mingling amongst the crowds. Vans embraces this milestone 49 years in the making, and last night’s epic celebration was the first of many to come.

The tour continues! PROPELLER makes its international film debut with stops in Europe, Asia, Australia, Canada and Mexico. Local PROPELLER screenings are being hosted in select cities around the world. To find a local screening near you, visit VANSPROPELLER.COM to learn more about world premiere tour dates, theater locations, and ticket information.

Vans is proud to announce the official worldwide release date of PROPELLER: A Vans Skateboarding Video available on iTunes beginning May 5, 2015.

Every significant skateboarding video energizes the community by building on the legacy of its predecessors to drive progression – propelling skateboarding forward.

PROPELLER: A Vans Skateboarding Video will be available for download on iTunes worldwide (except mainland China) beginning May 5, 2015.