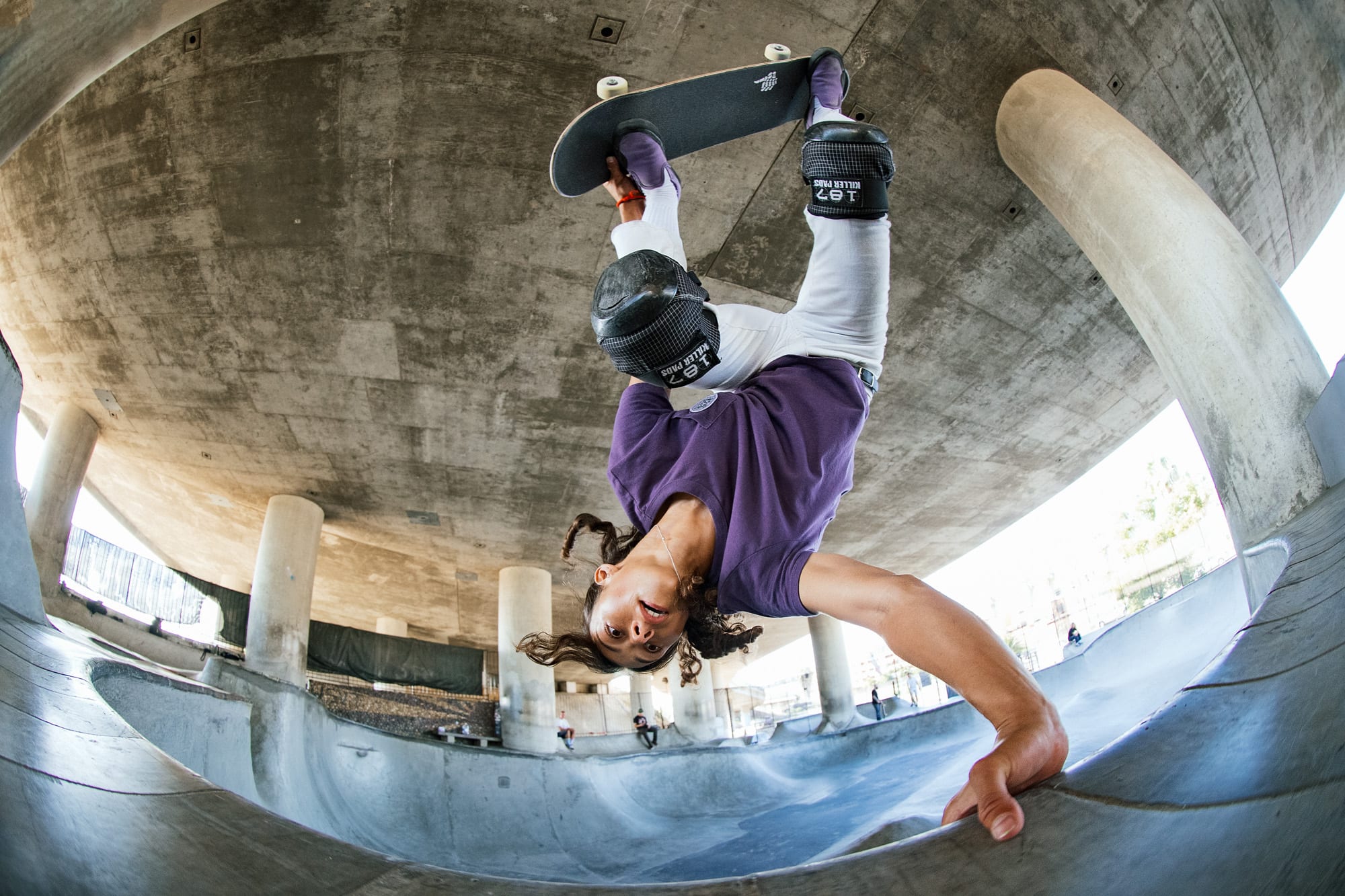 The latest collection from Vans’ global skate team rider Lizzie Armanto has finally sprung. With the super bloom season exploding with eye-catching and colorful flowers, it’s only natural for Lizzie’s new collection to blossom in a beautiful lavender pack featuring the Vans Slip-On Pro, Sk8-Hi Pro and matching apparel to complement. Lizzie’s vibrant aesthetic and love for skateboarding has inspired a collection made for women to feel comfortable and boldly push forward.

While traveling in Asia, Lizzie became enamored with the traditional Japanese “Maneki-neko” cat that symbolizes good luck and knew it had to be incorporated in this collection. Both the Vans Slip-On Pro and Vans Sk8-Hi Pro have good fortune detailed in the sole and Lizzie’s own personal initials embroidered onto the heel counter. The Sk8-Hi Pro continues to bring her aesthetic to life with the top eyelet shaped as a flower, custom made for Lizzie.

Designed with movement in mind, Lizzie’s apparel collection is both stylish and functional. The Lizzie Body Suit provides a breathable cotton elastane material covered with an all-over checkered print that stays tucked in for optimal skate activity. The Lizzie Raglan Hoodie is the perfect pullover for warming up before a skate session. With a relaxed fit that keeps comfy looking fresh, the striking lavender-toned colorway and Lizzie’s embroidered signature makes this an essential to the outfit. Finally, the Lizzie Skate Pack keeps all the travel essentials tucked away in a backpack perfect for traveling with two main compartments ideal for tech storage, skate gear and other knick knacks.

Part of the Vans global family since 2014, Lizzie Armanto has paved her own path, boasting several contest wins and acclaimed video parts along the way. Staying true to the Vans DNA, Armanto has emerged as an icon of originality and an inspiration to aspiring skaters across the globe. When she’s not traveling or at her local skatepark, Lizzie continues to make her mark in skateboarding history by becoming the first woman to complete the infamous Tony Hawk loop in late 2018. Vans’ collaboration with Lizzie aligns with the brand’s commitment to enable and empower women skateboarders around the world.

The Vans x Lizzie Armanto Collection is available online and in-stores now. To learn more about Vans Skate and to find an authorized dealer near you, visit Vans.com/skate.

Tune in on May 18 at vansparkseries.com for Tony Hawk’s live Park Series debut!

“Skating has shaped my life experience, so I’m beyond excited to join the Vans Park Series team on tour and continue to advocate for youth and their futures in skateboarding on the global stage,” said Tony Hawk. “I’ve seen overall skating talent evolve quickly in recent years so I’m looking forward to watching that progression in the form of park terrain skateboarding unfold.”

The entire 2019 competition series will be broadcast live on vansparkseries.com and will feature the best names in park terrain skateboarding such as Pedro Barros, Alex Sorgente, Oskar Rozenberg Hallberg, Tom Schaar, Nora Vasconcellos, Brighton Zeuner, Lizzie Armanto, and many more.

“Tony’s name is synonymous with skateboarding around the world,” said Bobby Gascon, global director of action sports, Vans. “He represents the very best of the sport and has been the pinnacle ambassador of skateboarding for decades. We are grateful and couldn’t ask for a better voice to support Vans Park Series’ mission to promote skateboarding’s creative culture and grow participation worldwide.”

Hawk will bring a lifetime of expertise to the Vans Park Series premium live broadcast, providing global viewers and listeners with an exhilarating, competitive skateboarding showcase experience. Those tuning in will have the opportunity to hear expert commentary and perspective from one of the most iconic names in skateboarding.

The most recognized action sports figure in the world, Tony Hawk was just nine years old when his brother changed his life by giving him a blue fiberglass Bahne skateboard. By fourteen he’d turned pro, and by sixteen he was widely considered the best skateboarder on earth. In 1999, he became the first skater to ever complete a 900, the holy grail of vert skating. Shortly thereafter, he teamed with Activision Blizzard to launch the billion-dollar video game franchise Tony Hawk’s Pro Skater. He has created Tony Hawk brands that include Birdhouse Skateboards, Hawk Clothing and Eyewear, and Tony Hawk sporting goods and toys and has authored a New York Times bestseller. His 900 Films production company launched The RIDE Channel, one of the most popular skateboarding destinations on YouTube. The Tony Hawk Foundation has donated more than $9 million to help build over 600 skatepark projects throughout the world.

The 2019 Vans Park Series Pro Tour is the premier competitive platform for professional park terrain skateboarding. Spanning five countries over a five-month season, the series features four global qualifiers for men and women, and culminates with the official Vans Park Series World Championships to be held in Salt Lake City, Utah in September. Showcasing an international roster of skateboarding’s elite pros, Vans Park Series awards a total series purse in excess of $700,000(USD) and advocates its principal commitment to prize parity for men and women.

In skateboarding, community is everything. Anywhere in the world, if you skate, you’ll find a home among the local scene. Australia’s Pass~Port has built a worldwide following by fostering skaters and creatives alike, pushing boundaries with rich and honest visuals backed by a feeling that what matters most is that you do whatever you do with soul. In honor of this spirit, Vans Pro Skate unveils a limited-edition Pass~Port Sid Pro and matching Bomber Jacket to mark the second collaboration between the two authentic skateboarding brands.

Defined by an embossed allover brick pattern, Pass~Port’s new Vans collection is inspired by local spot “Fitzy Plaza” located in Edinsburgh Gardens, North Fitzroy. The burnt red brick community building and the lush green footy fields surrounding the spot were a direct influence on the shoes and jacket design. With custom tongue labels and embroidered Pass~Port logos on the instep and heel, the Sid Pro—a reintroduced 90s Vans style almost exclusively utilized as a silhouette for collaboration—references the digger man motif often seen in Pass~Port graphics and the brand’s retro visuals inspired by skate videos of decades past.

Supporting the Sid Pro is a custom Bomber Jacket with mirroring brick iconography.

Founded in 2009 by Trent Evans, the Pass~Port brand exists to push progression and support creativity in skateboarding and beyond. In the decade since inception, the brand has gone on to become one of Australia’s most celebrated skate exports, making a mark at home and abroad while continuing to foster local Australian skaters and the creative community at large. As the soaring mosaic in their new Darlinghurst, Sydney store and gallery says, it’s all about “International Solidarity.”

Visit vans.com/skate to find authorized dealers near you.