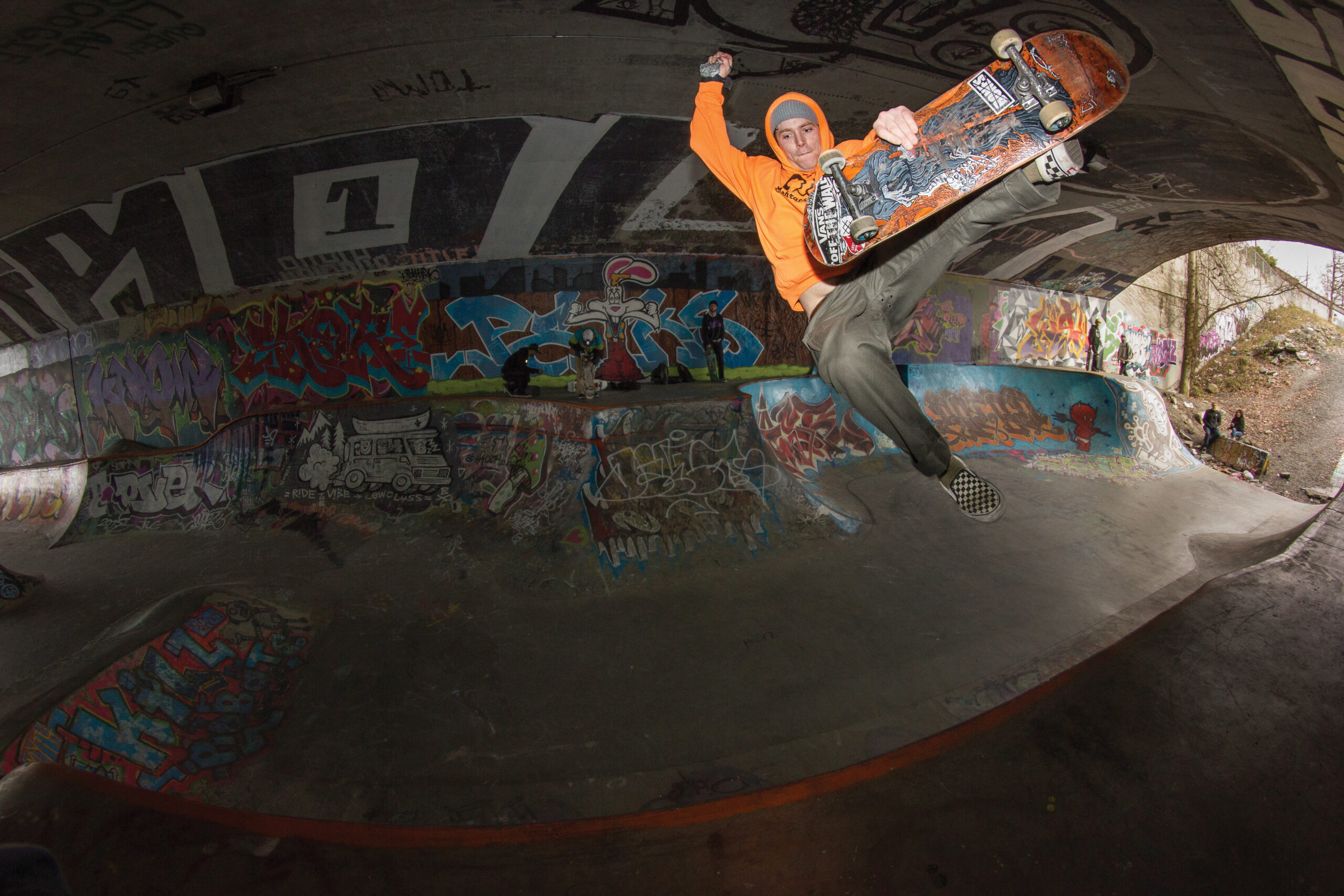 As the sun sets over East Vancouver, the verdant peaks of the North Shore mountains turn into darkened silhouettes; the bottom set of teeth on the earth’s jaw, decaying to black in its endless and impassable quest to swallow the sky. A murder of crows crosses the harbour like a slowly exhaled breath from this fractured skeleton. They are flying to roost in neighboring Burnaby’s business sector, where sleek new office buildings have been erected over former swampland. For the night, they will reclaim their avian domain, dispersing again in the morning. Such is the nature of this metropolis – temporary, constantly in flux.

Underneath this migration, an outcast is perched on a steel guardrail, a red plastic band wrapped above his left talon. He has abandoned his brothers for the comforts of human care. Yet even if he wanted to return, they would not have him back. He would be maimed and  expelled from the murder once more, at best. Resigned to his exile, Canuck the Crow pushes off and, after a few initial flaps of his wings, glides across a newly built soccer field towards a large pedestrian tunnel.

Strange concrete obstacles spill out of the tunnel’s end, vines creep across its roof to the highway above and intricate graffiti designs stake claim on impossible-to-reach surfaces. Here, there are creatures like him – outcasts by choice, content with their existence outside of society. They are skateboarders, and they admire this crow, for he holds no judgement against them. Here he can perch on a shoulder or on a skateboard and try (and sometimes succeed) to steal shiny valuables. In other words, be himself. And this is exactly what the skaters are doing here too. This is Leeside.

Before Leeside was Leeside, this was a wasteland of human shit, piss, needles and smouldering mattresses. A place where even deviant skateboarders felt ill at ease. Now, it is a world-class DIY skatepark. The immaculate concrete forms which have been erected in this tunnel are nothing short of a miracle, because the amount of sweat, beer and red tape that is interned in their transitions is immeasurable.

It all started with wooden ramps. A young skateboarder and artist named Lee Matasi saw the tunnel’s potential and out of his   vision the early obstacles appeared. For years, this was the domain of janky, splinter-inducing ramps that nevertheless were a boon to the local skateboard community. In a city carved out of the damp thickets of a temperate rainforest, where real estate prices kybosh most plans for an indoor skatepark before a pen is ever set to paper, a dry, covered place to skate is an oasis.

Skateboarders have a tendency to attract attention, either from concerned citizens worried about paint chips and insurance liabilities or from greasy venture capitalists looking to stay on top of emerging market trends. We just can’t seem to fly under the radar. When multiple arsons devoured the wooden ramps, the city took the opportunity to shut down Leeside, covering the entire tunnel in a compact layer of gravel. Skateboarding at Leeside was over. And then the real tragedy occurred. In 2005, Lee was gunned down in a senseless act of violence outside of a Vancouver nightclub. Reeling from the loss, Lee’s friends decided to honor their fallen brother by reigniting the flame of skateboard stoke in the dormant tunnel. Blow by blow, the gravel was pickaxed and removed, and the spirit of Lee was poured into the first transitioned barriers, ushering in the new era of Leeside.

Since then, the tunnel has grown, obstacle by obstacle. If you weren’t aware of the dozens of people behind the scenes, you’d think it had a life of its own – a concrete mutant, fed by the sludge that collects in the gutters of East Hastings, perpetually sprouting another functional deformity. The crusty features that remain from Leeside’s early days probably do resemble abominations to those more accustomed to cookie-cutter Canadian skatepark design. But to the locals, they are sacred ground. The north end of Leeside is a temple of tight transition worship where the dark incantations of pool block abuse can be repeated and amplified. The tunnel creates powerful, sinister acoustics, turning a simple slash into a three-throated howl from the mouths of Cerberus.

In sharp contrast to the organic, unforgiving walls of the north end, the south half of Leeside has undergone a massive overhaul,  creating something even bigger, smoother and faster than anyone thought was possible. Walls have doubled in size, new flat has been poured, and an infinity vert wall has been proved finite by Chris Russell, who planted four wheels on the roof of the tunnel in a reality- bending display of aerial savagery. He joins the late Josh Evin in immortalizing himself into Leeside legend. Josh’s kickflip into a makeshift plywood hill bomb at the tunnel’s south end, followed by a supersonic melon blaster over a rickety tabletop is something that will never be repeated. The uninitiated would be well-advised to search the dark web for that one.

The reinvention of Leeside’s south end has transformed a motley collection of obstacles into, arguably, Canada’s most advanced bowlriding terrain, putting it on par with the best DIYs in the world. But it almost didn’t happen. In a calamitous repeat of history, arsonists struck the tunnel just hours before the first pour was set to take place, dousing the wooden framing in gasoline and starting a fire so hot that it cracked and chipped the tunnel’s concrete roof. Once again, the city moved in for the kill, ready to deem the tunnel structurally unsound and stamp out the skateboard nuisance once and for all. The devil’s toy has a way of sparking people’s tinder-dry intolerance for the unconventional, but in the end cooler heads prevailed. The Leeside Stewardship Group plodded through the quagmire of municipal politics for months on end, eventually emerging from the bog with the green light to continue building.

As the name implies, the genesis of Leeside was inspired by its predecessor to the south, the almighty Burnside. Burnside laid the template for the DIY explosion that we now see resonating globally, showing us all what is possible when a dedicated group of skateboarders pools their collective focus and energy into a spot for long enough. And like Burnside, Leeside has been the scene of hectic, surreal Halloween jams for many years. In a maelstrom of beer and fireworks, costumed creatures from another world gather to punish the coping and themselves, creating a fever dream-state that can exist at only that exact moment, in only that exact place. This collective effervescence has resulted in some of the most crushing sessions the tunnel has ever seen. It has also resulted in unwanted popularity after a group of filmmakers created a YouTube hit out of the evening. The following year, the jocks and kooks showed up and blew out the scene, and our unholy ritual now takes place on an undisclosed date. If you don’t know, then you’re not invited.

Skateboarding is unpredictable – that’s what makes it special. When it is co-opted and staged to serve ulterior motives, it loses its magic. Leeside, and DIY parks in general, are as close to the essence of skateboarding as concrete construction can get. Inconstant, unplanned and with no guarantees of success. It is a perfect synthesis resulting in an imperfect product. And every kink in the transition, every bend in the coping, every rough patch on the flatbottom reminds us why we started skating in the first place. We want to explore the unknown and put ourselves into danger, just to see if maybe, possibly we might emerge unharmed. And if we don’t make it, if we get served and end up in a crumpled heap on the flat, leaking from an unknown opening and temporarily rethinking our life choices, then at least we tried.

With the constant proliferation of skateparks around the world, it might be easy to take a place like Leeside for granted. A youngster showing up at Leeside for their first time can’t be blamed for not understanding all that has gone in to making the place a reality. The 16-hour build days, the endless meetings with clueless city bureaucrats, the countless fundraisers, the devastating arsons, the dirt, the sweat, the missed personal obligations, the strained relationships, the uncertainty of things even working out at all… the concrete can’t actually speak about this. And the Leeside builders don’t want accolades. They just want people to skate and respect the park. But if you happen to run into FC, Jamie Maley, Max Bayko, Mike Knittel, Michelle Pezel or Baxter, you should probably buy them a beer. The skate gods will appreciate it.

Tens of thousands of commuters pass over this tunnel each day, racing towards mediocrity. They only look ahead, eager to sink another nail into the coffins they have built for their dreams. The terminal spirit disease, which corrodes their souls blinds them, too, and they are oblivious to what lies just beneath them. But much like you might mistake Canuck for just another crow until he is flying away with your keys, Leeside might look like just another tunnel until you find yourself inside of it. And if you’ve been bitten by the same bug as us, you may just never leave.

For the print version of this story, get Juice Magazine #76 here.