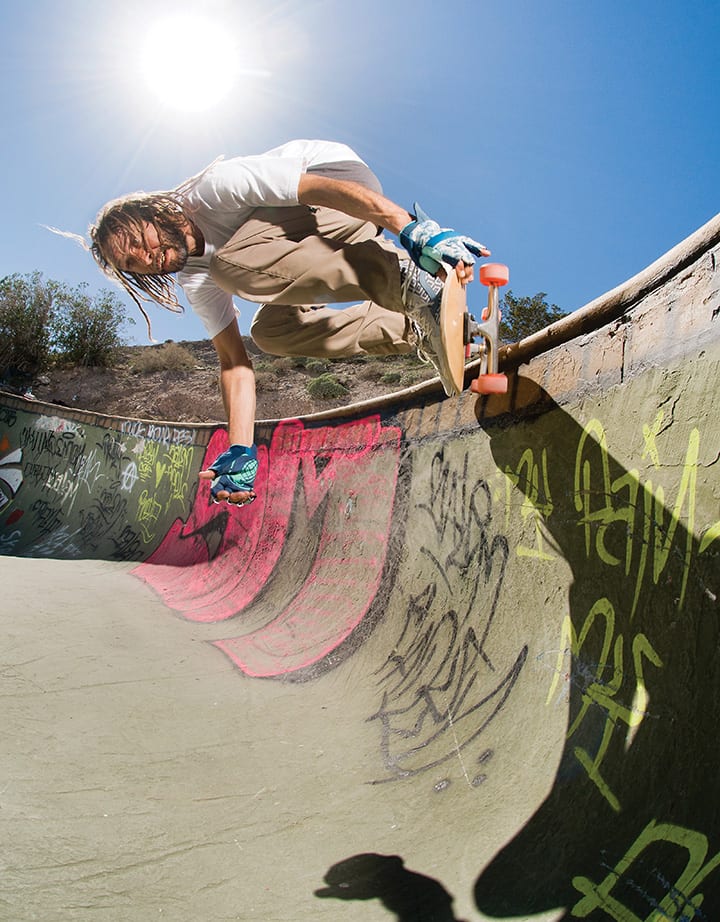 What set-up are you riding right now?
My setups vary. I have a quiver of boards. My favorite is about thirty-four inches long and at least eleven inches wide. It’s like a rounded off old DogTown shape. I’m riding 58mm wheels, which are 92 durometer hardness. I make the wheels and decks and I ride Independent 215’s. I ride a pretty big wheelbase, as well, at least seventeen inches. I like the stability. I don’t like very much of a nose on my boards because I don’t really need it. I ride pools and the shorter nose helps on the steeper transitions of a pool.

What’s the most fun DIY, skater-built or renegade spot that you’ve skated lately?
My favorite renegade spot is the Indian School ditch in Albuquerque, New Mexico. It comes down from the heights in Los Altos and literally runs into the foothills of the city. You can haul ass in that ditch and ride for miles. I ride a 36-inch board in the ditches and I use a softer tire.

Have you ever built something to skate?
I once had a really cool ramp in my backyard in San Clemente. It was really wide and had seven foot extensions that we could fly off. It was super cool to practice on. We had a bunch of surf style skate sessions on that ramp. I miss it.

Who do you like to skate with the most these days?
I skate with Ozzie, Arto, Lance Mountain, Christian Hosoi, Steve Caballero, and many of the local guys here in L.A. at the skateparks. Lance is probably my favorite person to skate with because he constantly pushes and amazes me with the things that he does. He’s very all-terrain. I like seeing Arto Saari, Greyson Fletcher, Curren Caples and Anthony Van Engelen ride.

Coolest skateboard graphic you have seen lately?
I like resin art. I like graphics on surfboards more than skateboards. Tyler Warren does beautiful stuff on his boards. I like what Ryan Burch does as well.

Best thing you’ve ever skated in a skatepark and what skatepark was it?
Believe it or not, the best thing I ever skated in a skatepark was in Shanghai, China. It was beautiful, big, grippy and it had everything you could possibly want to skate. It had a pipe, cradle, banks and everything. I like the local Santa Monica park, The Cove, Pedlow and Culver City. The older park that I really liked was Marina del Rey. It had the Dog Bowl replica in it, but the park didn’t last for very long.

Favorite skateboarders of all time?
I really like Rowan Zorilla. That kid is amazing! He’s off-the-hook good. I like Tony Trujillo and Daniel Lutheran. I like the long-haired, crazy style kids. As far as older riders, I’d have to say that Lance Mountain, Christian Hosoi and Steve Caballero are still holding it all down.

Is there anything that hasn’t been built to skate yet that you’d like to see built?
Not really. We have everything. I mean, I’d like to see sections of pipes where we could transfer from one to another, but we had that at Nukeland. I prefer to ride things that aren’t meant for skateboarding.

What’s one of the best road trips you ever took?
I’d have to say that the best road trip ever, was my first trip to Europe in 1977 with Wynn Miller. It was my first time there and we covered every part of Europe. It was sponsored and everything. Full rock star scene. I don’t think it’ll ever be better than that. Some other trips that really stand out are the ones where I get to surf and skate. Trips to Chile are really fun.

Are there any skate-related charities that you support?
Not really, but I work with Wild Coast that helps preserve the surfing coast in Baja and I also do stuff with Music Cares. Musicians come together and perform. We give money to the organization and it is utilized for a good cause. We did a benefit show a few months ago to help raise money and awareness and help people trying to get sober. I did this recently in Argentina too.

What music have you been listening to lately?
I listen to Reggae, Indian music, old rock and spooky stuff like Joy Division, The Cure and The Clash. I really like The Clash and I’m sure there are many skaters and musicians out there who would name The Clash as being very influential for them. I love the Rolling Stones, Led Zeppelin and the Beatles as well.

What do you consider the responsibilities of a professional skateboarder?
Teaching kids to be a pro, on and off of the board. Also, the fun. You have to keep doing it because it is fun. The sponsorship thing doesn’t really matter as much as the fun quotient.

What is your favorite skate photo of all time?
It’s the one of Matt Hensley, under the freeway overpass in San Diego, doing an ollie high up above the traffic. It’s a great photograph. As far as photographs of me, I’d say the Wynn Miller shot of me transferring pipe to pipe at Nukeland. I’m way up there. I like photographs that make you wonder how the skater got up there in the first place. Then there’s the element of the photographer catching the color, the light and clarity. Those two images really come to mind for me.

What is your take on girls skateboarding?
I love them. I’ve always supported the girls. Cara Beth Burnside is one of my favorite skateboarders. The new girls coming up are amazing. Lizzie Armanto is great. She’s not only cute, but she’s really good and she has beautiful style as well. I like Mimi Knoop, Vanessa Torres and Jen O’Brien. I think that girls that skate bowls have a better style about them than just a traditional street skater. I think women have a way of making something look very graceful and easy when it isn’t.

What skateboarding memorabilia do you have that means the most to you?
I’m not a collector. I’d say old photographs, if anything. I think the one thing I’ve kept is my DogTown & Z-Boys book that everyone signed. I have that. I got rid of my old trophies. They were taking up space and getting dusty and they never represented anything valuable to me. I already know… I don’t need trophies to remind me. I have a good memory when it comes to certain events. I remember.

Top three favorite skate tricks?
My tricks are limited, so I’d say backside disasters on vert and pool coping, a big frontside air and any type of hip transfers. I love the feeling of flying over a hip and not even grabbing my board. It’s like a floating carve. I love doing those.

Do you think skateboarding should be in the Olympics?
No. They need us more than we need them. I think that the commercialization of skateboarding isn’t always a positive thing. This is just my personal belief.

What is your proudest moment in skateboarding so far?
It was winning the Men’s Overall at the World Championships in 1977 with Bunker [Spreckels] and all of my friends there. I rode for Logan Earth Ski and I was riding a Torger Johnson board. It was a big deal. That was it. After that, I was over contests for the most part.