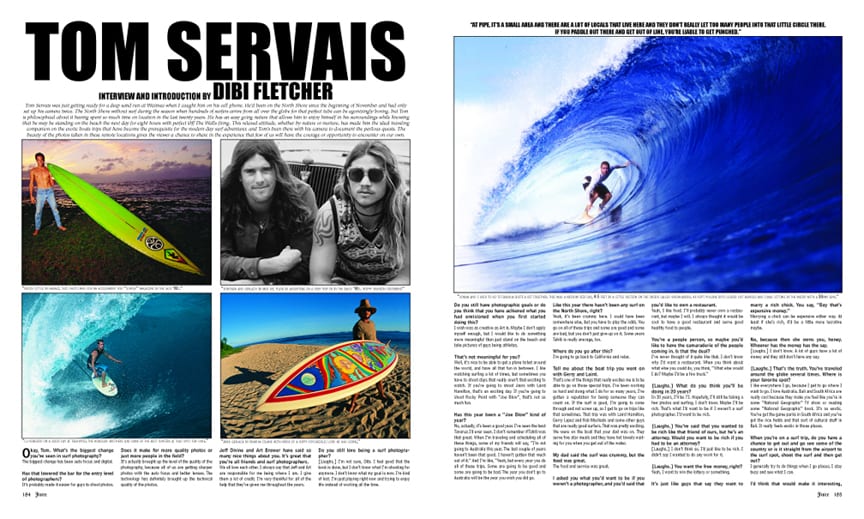 Tom Servais was just getting ready for a deep sand run at Waimea when I caught him on his cell phone. He’d been on the North Shore since the beginning of November and had only set up his camera twice. The North Shore without surf during the season when hundreds of surfers arrive from all over the globe for that perfect tube can be agonizingly boring, but Tom is philosophical about it having spent so much time on location in the last twenty years. He has an easy going nature that allows him to enjoy himself in his surroundings while knowing that he may be standing on the beach the next day for eight hours with perfect Off The Walls firing. This relaxed attitude, whether by nature or nurture, has made him the ideal traveling companion on the exotic boats trips that have become the prerequisite for the modern day surf adventurer, and Tom’s been there with his camera to document the perilous quests. The beauty of the photos taken in these remote locations gives the viewer a chance to share in the experience that few of us will have the courage or opportunity to encounter on our own.

Has that lowered the bar for the entry level of photographers?
It’s probably made it easier for guys to shoot photos.

Jeff Divine and Art Brewer have said so many nice things about you. It’s great that you’re all friends and surf photographers.
We all love each other. I always say that Jeff and Art are responsible for me being where I am. I give them a lot of credit. I’m very thankful for all of the help that they’ve given me throughout the years.

Do you still love being a surf photographer?
[Laughs.] I’m not sure, Dibi. I feel good that the book is done, but I don’t know what I’m shooting for anymore. I don’t know what my goal is now. I’m kind of lost. I’m just playing right now and trying to enjoy life instead of working all the time.

Do you still have photographic goals or do you think that you have achieved what you had envisioned when you first started doing this?
I wish was as creative as Art is. Maybe I don’t apply myself enough, but I would like to do something more meaningful than just stand on the beach and take pictures of guys being athletes.

That’s not meaningful for you?
Well, it’s nice to be able to get a plane ticket around the world, and have all that fun in between. I like watching surfing a lot of times, but sometimes you have to shoot days that really aren’t that exciting to watch. If you’re going to shoot Jaws with Laird Hamilton, that’s an exciting day. If you’re going to shoot Rocky Point with ‘Joe Blow’, that’s not so much fun.

Has this year been a ‘Joe Blow’ kind of year?
No, actually, it’s been a good year. I’ve seen the best Tavarua I’d ever seen. I don’t remember if Tahiti was that great. When I’m traveling and scheduling all of these things, some of my friends will say, ‘I’m not going to Australia this year. The last couple of years haven’t been that good. I haven’t gotten that much out of it.’ And I’m like, ‘Yeah, but every year you do all of these trips. Some are going to be good and some are going to be bad. The year you don’t go to Australia will be the year you wish you did go.

Like this year there hasn’t been any surf on the North Shore, right?
Yeah, it’s been crummy here. I could have been somewhere else, but you have to play the odds. You go on all of these trips and some are good and some are bad, but you don’t just give up on it. Some years Tahiti is really average, too.

Where do you go after this?
I’m going to go back to California and relax.

Tell me about the boat trip you went on with Gerry and Laird.
That’s one of the things that really excites me is to be able to go on those special trips. I’ve been working so hard and doing what I do for so many years, I’ve gotten a reputation for being someone they can count on. If the surf is good, I’m going to come through and not screw up, so I get to go on trips like that sometimes. That trip was with Laird Hamilton, Gerry Lopez and Rob Machado and some other guys that are really good surfers. That was pretty exciting. We were on the boat that your dad was on. They serve five star meals and they have hot towels waiting for you when you get out of the water.

My dad said the surf was crummy, but the food was great.
The food and service was great.

I asked you what you’d want to be if you weren’t a photographer, and you’d said that you’d like to own a restaurant.
Yeah, I like food. I’ll probably never own a restaurant, but maybe I will. I always thought it would be cool to have a good restaurant and serve good healthy food to people.

You’re a people person, so maybe you’d like to have the camaraderie of the people coming in. Is that the deal?
I’ve never thought of it quite like that. I don’t know why I’d want a restaurant. When you think about what else you could do, you think, ‘What else would I do? Maybe I’d be a fire truck.’

[Laughs.] You’ve said that you wanted to be rich like that friend of ours, but he’s an attorney. Would you want to be rich if you had to be an attorney?
[Laughs.] I don’t think so. I’d just like to be rich. I didn’t say I wanted to do any work for it.