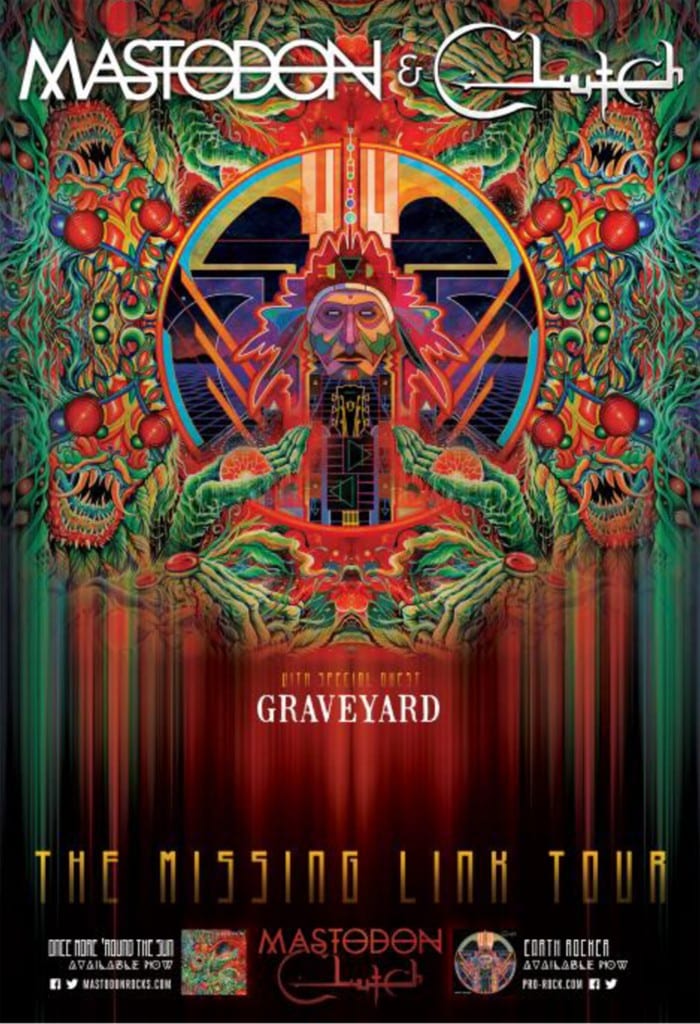 The Missing Link Tour with Mastodon and Clutch

Two of the world’s most respected and influential hard rock bands Mastodon and Clutch are proud to announce THE MISSING LINK TOUR which brings together both bands as they join forces along with special guests Graveyard and Big Business – each taking part of the tour as support. Together, this night of heavy rock will be one of the heaviest and most exciting concert events of the year.

THE MISSING LINK TOUR kicks off on April 16 in St. Paul, MN. with support provided by Big Business, who recently supported Mastodon throughout a sold-out European tour. Sweden’s  Graveyard will then take over the main support slot starting in Los Angeles on April 29 for the remaining dates, closing out the tour in Columbus, OH on May 24.  Tickets are on sale now.

Mastodon and Clutch share a longtime friendship as fans will recall Clutch front man Neil Fallon contributed vocals to “Blood And Thunder” (from Mastodon’s 2004’s Leviathan) so fans can expect surprises in store for fans throughout the tour rumbling across North America. THE MISSING LINK TOUR will feature full sets from both Mastodon and Clutch. Clutch will close the show on April 24 in Vancouver, May 10 in Pittsburgh, May 15 in Bethlehem,  May 16 in Baltimore and also the final night of the tour,  May 24  in Columbus. Mastodon will close all other shows.  For further info on Mastodon, go to: http://www.mastodonrocks.com/.  For further info on Clutch go to http://www.pro-rock.com

Clutch drummer Jean-Paul Gaster had this to say about the tour. “We are very much looking forward to our US tour with our friends in Mastodon. We always enjoy playing live but when we have the opportunity to share the stage with a band as inspiring as Mastodon we know each evening will be that much more special. See ya out there!”

Mark your calendars, as THE MISSING LINK TOUR will roll into Denver’s prestigious Red Rocks Amphitheatre on May 3, and joins the stellar line up for Atlanta’s Shaky Knee’s Festival on May 8.  The New York City show will take over the  celebrated Central Park Summer Stage annual concert series on May 19.  General tickets on-sale Friday, January 23rd.

As previously announced, Mastodon have been nominated for a 2015 Grammy Award for Best Metal Performance for “High Road,” from ONCE MORE ‘ROUND THE SUN. This is the band’s third Grammy nomination.  The 57tb Annual Grammy Awards will be held in Los Angeles on Feb 8. Tune into CBS TV.

Revered Maryland rockers Clutch have been pushing the boundaries that define heavy rock music since the 4 original members got together in high school. Clutch is an unmatched musical force that has been best described as “the quintessential American Rock Band”. Clutch released their tenth and latest studio album Earth Rocker via their own label Weathermaker Music on March 16, 2013. The album entered the Billboard Top 200 chart at #15 giving the band their highest chart position to date.

Mastodon’s sixth studio album, the universally praised, ONCE MORE ‘ROUND THE SUN, entered the Billboard Top 200 Albums chart at the #6 position on June 24, 2014, also their highest chart debut of their career.  ONCE MORE ‘ROUND THE SUN has rightfully been placed in many Year End Critics & fan BEST OF 2014 lists including those in Rolling Stone, Revolver, Magnet, Decibel, CMJ and many more. At present Mastodon has remained on the CMJ Loud Rock charts for the 26th week in a row. When OMRTS was placed No. 8 on Rolling Stone’s “Top 20 Metal Albums of 2014” list, they summed up the success of the album stating, “The bold hooks and sharply defined riffs of Mastodon’s sixth studio full-length makes it easy to hear this album as their evolution from prog-sludge wizards to straight-ahead hard rockers — but the reality is actually far more, er, complex… Ultimately, the best part of Sun is Mastodon’s ability to make hooky and visceral music without sacrificing either their metallic muscle or their innate weirdness.”

Clutch’s Earth Rocker reached #1 on the Rock Chart and #4 on iTunes’ overall Top 100 album chart. Earth Rocker was awarded “Album of The Year” by Metal Hammer and garnered a Top 10 spot on Rolling Stone’s “Top 20 Metal Albums of the Year”. Rolling Stone further enthused:  “Four Maryland lifers — road dogs who’ve been grinding since the early Fugazi administration, cranking out  seething admixtures of jam-band chops, careening blues-punk riffs and singer Neil Fallon’s nerdy, piss-taking wiseass lyrics — release their hardest rocking set to date. Look for a go-go break (and some clever punning on the phrase “drop the bomb!”) on “D.C. Sound Attack!” Inspirational verse: “If you’re gonna do it/ do it live on stage/ or don’t do it at all.”

Clutch is currently working on their follow up to Earth Rocker which will be released in 2015.

Do not miss THE MISSING LINK TOUR this spring. Confirmed dates are as follows: