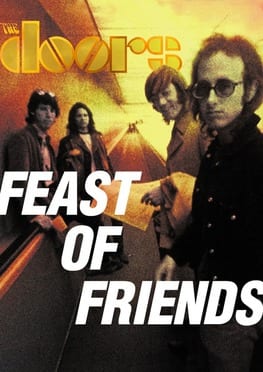 THE DOORS “Feast Of Friends” DVD, Blu-ray – To Be Released November 11

The Doors “Feast Of Friends” will be released on November 11th on DVD or Blu Ray.

Press Release:
New York, NY (September 15, 2014)–Fans of THE DOORS will savor the news about the November 11 street date of a never-before-released documentary film produced by the band.  Titled Feast of Friends, the intimate and rare look at the explosive rock band is, after 45 years, finally being released.  Shelved due to lead singer Jim Morrison’s legal issues, the uncompleted film was only ever seen at a few film festivals and was never completed.  Eagle Rock Entertainment and Doors Property, LLC have painstakingly remastered the audio and video and compiled bonus footage as well as an historic British documentary called The Doors Are Open. [Pre-book Order Date October 17, MSRP $19.98 Blu-ray, $14.98 DVD]

In April of 1968, filming began for what would become the first and only film produced about The Doors, by The Doors.  Funded by the band and helmed by friend and fellow film graduate Paul Ferrara, the footage shot for this film would become the well from which the majority of future documentaries and music videos about the band would draw. This film became Feast of Friends, as Paul Ferrara thought it was a great lyric to use for the title.  Other than a few appearances in film festivals the following year, an official release would never be seen. Until now.

If not for a poor quality bootleg copy circulated among collectors and eventually via the Internet, the film’s existence would have scarcely been known beyond the circle of diehard Doors fans. By many accounts, the original source of that bootleg is thought to have been Morrison’s own copy, which he hand-carried when he moved to Paris in 1971 after recording what would be The Doors’ final album.  Concealed in a paper bag and forgotten at a friend’s house, Morrison would never reclaim it, as he passed suddenly a few days later.

Feast of Friends offers a cinematic look at The Doors on the road during their summer ’68 tour. Whilst never truly completed, as the production funding was abruptly cut due to the band’s political problems stemming from Jim’s arrest in Miami, the film provides a stylistic approach in true 60’s cinéma vérité style.  The film is comprised of concert performances which are intercut with fly-on-the-wall footage of the group in their natural habitat – playful, sensitive, chaotic and touching. Other than a few appearances in film festivals in 1968, this is the first official release. Completely restored from the original negative, as supervised by Jim Morrison, the film has been color-corrected and mastered in high definition with the soundtrack totally remixed and remastered by long-time Doors co-producer/engineer Bruce Botnick.

As well as the full version of Feast of Friends, this amazing release contains three important bonus features.  The first is Feast of Friends: Encore.  A newly produced feature using footage shot for Feast of Friends, Encore is a complimentary piece that provides a deeper look into the life of the band during this period as they tour, record, travel and even vacation together. The program avoids the typical selection of hits and makes use of The Doors’ rare recordings to accompany this unreleased footage.  Encore showcases the band’s recording process as The Doors record one of their biggest hits, “Wild Child.”  Viewers will follow the band as they break from touring to sightsee, play poker in their hotel room and witness an unedited interaction with Jim and the “Minister at Large” who attempts to determine “just what the hell it is (they’re) doing.”  Fans will also see a newly unearthed solo backstage performance by a singing Robby Krieger, a poem by Jim Morrison (while, in the background, you can hear Ray Manzarek’s piano work on “Love Street”), a never-before-seen altercation with legendary photographer Richard Avedon, a tranquil scene of Jim and his friends at peace in the cool waters of the Kern River, and much more.

Next is The Doors Are Open – A British TV documentary originally aired on December 17th, 1968, focused around the band’s performance at London’s Roundhouse, which took place just days after the completion of filming for Feast of Friends. Interspersed with the band’s music are intense scenes from the Vietnam War, political leaders, and riots back in the States. The Doors Are Open highlights the political relevance of The Doors’ opinionated lyrics and iconic sound while giving context to the tumultuous times in which they were living. Although previously released, the film has suffered from numerous sound and picture quality issues. Now the image quality has been dramatically improved and the sound has been transformed by Bruce Botnick to be as true to the original live sound as possible.

Also included is The End – a feature that was filmed in Toronto, Canada in August 1967. This performance of ‘The End’ was for The O’Keefe Centre Presents: The Rock Scene – Like It Is.  It was originally broadcast on October 16, 1967 in Canada, and August 1, 1970 in the US as part of a musical program called The Now Explosion. In addition to the performance, it includes an introduction by Noel Harrison and later interviews by John Densmore, Robby Krieger, Ray Manzarek and longtime Doors collaborator Danny Sugerman. Many fans consider this recording to be one of the best Doors performances ever caught on film.

Feast of Friends paints a chaotic yet gentle picture of the humanistic side of The Doors seldom captured by anyone – at that time or since.  At one moment Morrison is fighting off legions of ravenous fans while at the same time taunting them to keep pressing on. These films represent the most requested visuals from The Doors via fan polls worldwide, finally presented together in stunning style; Feast of Friends is an historical piece of 60’s filmmaking that is important to both The Doors’ fans and the wider world of cinema.

Eagle Rock Entertainment is the largest producer and distributor of music programming for DVD, Blu-Ray, TV, Audio and Digital Media in the world.  Eagle works directly alongside talent to produce top quality, High Definition and 3D programs, both concerts and documentaries, including The Rolling Stones, Pink Floyd, The Who, Queen, The Doors, Jeff Beck, U2, Peter Gabriel, Paul McCartney and Ozzy Osbourne. Eagle is a Grammy Award winning company and has received over 30 multi-platinum, over 50 platinum and over 90 gold discs, worldwide.  Eagle Rock Entertainment has offices in London, New York, Toronto, Paris and Hamburg.