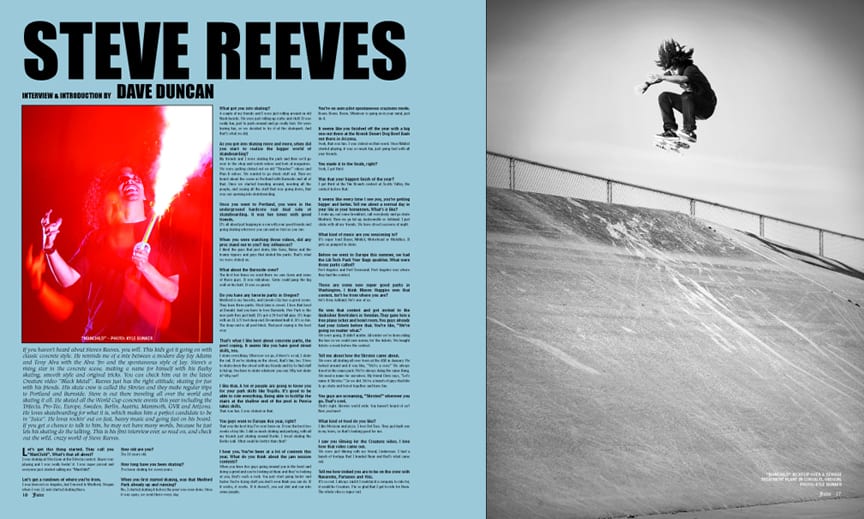 If you haven’t heard about Steven Reeves, you will. This kid’s got it going on with classic concrete style. He reminds me of a mix between a modern day Jay Adams and Tony Alva with the Alva ‘fro and the spontaneous style of Jay. Steve’s a rising star in the concrete scene, making a name for himself with his flashy skating, smooth style and original tricks. You can check him out in the latest Creature video ‘Black Metal’. Reeves just has the right attitude; skating for fun with his friends. His skate crew is called the Skrotes and they make regular trips to Portland and Burnside. Steve is out there traveling all over the world and skating it all. He skated all the World Cup concrete events this year including the Trifecta, Pro-Tec, Europe, Sweden, Berlin, Austria, Mammoth, GVR and Arizona. He loves skateboarding for what it is, which makes him a perfect candidate to be in ‘Juice’. He loves rockin’ out on fast, heavy music and going fast on his board. If you get a chance to talk to him, he may not have many words, because he just lets his skating do the talking. This is his first interview ever, so read on, and check out the wild, crazy world of Steve Reeves.

“IT’S ALL ABOUT JUST HOPPING IN A VAN WITH YOUR GOOD FRIENDS AND GOING SKATING WHEREVER YOU CAN AND AS FAST AS YOU CAN.”

Let’s get this thing started. They call you ‘ManChild’. What’s that all about?
I was skating at West Linn at the Trifecta contest. Slayer was playing and I was really feelin’ it. I was super pissed and everyone just started calling me ‘ManChild’.

Let’s get a rundown of where you’re from.
I was born in Los Angeles, but I moved to Medford, Oregon when I was 11 and started skating there.

When you first started skating, was that Medford Park already up and running?
No, I started skating it before the pour was even done. Once it was open, we went there every day.

What got you into skating?
A couple of my friends and I were just rolling around on old Nash boards. We were just rolling up curbs and stuff. It was really fun, just to push around and go really fast. We were having fun, so we decided to try it at the skatepark. And that’s what we did.

As you got into skating more and more, when did you start to realize the bigger world of skateboarding?
My friends and I were skating the park and then we’d go over to the shop and watch videos and look at magazines. We were getting stoked out on old ‘Thrasher’ videos and Plan B videos. We wanted to go check stuff out. Then we heard about the scene in Portland with Burnside and all of that. Once we started traveling around, meeting all the people, and seeing all the stuff that was going down, that was our opening into skateboarding.

Once you went to Portland, you were in the underground hardcore real deal side of skateboarding. It was fun times with good friends.
It’s all about just hopping in a van with your good friends and going skating wherever you can and as fast as you can.

When you were watching those videos, did any pros stand out to you? Any influences?
I liked the guys that just skate, like Gonz, Natas and the tranny rippers and guys that skated the parks. That’s what we were stoked on.

What about the Burnside crew?
The first few times we went there we saw Germ and some of those guys. It was ridiculous. Germ could jump the big wall on his butt. It was so gnarly.

Do you have any favorite parks in Oregon?
Medford is my favorite, and Lincoln City has a great scene. They have three parks. West Linn is sweet. I love that bowl at Donald. And you have to love Burnside. Pier Park is the new park they just built. It’s got a 20-foot full pipe. It’s huge with an 11 1/2 foot deep end. Dreamland built it. It’s so fun. The deep end is all pool block. That pool coping is the best ever.

That’s what I like best about concrete parks, the pool coping. It seems like you have good street skills, too.
I skate everything. Wherever we go, if there’s a rail, I skate the rail. If we’re skating on the street, that’s fun, too. I love to skate down the street with my friends and try to find stuff to hit up. You have to skate whatever you can. Why not skate it? Why not?

I like that. A lot of people are going to know you for your park skills like Trujillo. It’s good to be able to ride everything. Being able to kickflip the stairs at the shallow end of the pool in Peoria takes skills.
That was fun. I was stoked on that.

You guys went to Europe this year, right?
That was the best trip I’ve ever been on. It was the best two weeks of my life. I did so much skating and partying, with all my friends just skating around Berlin. I loved skating the Berlin wall. What could be better than that?

I hear you. You’ve been at a lot of contests this year. What do you think about the jam session contests?
When you have five guys going around you in the bowl and doing a grind and you’re looking at them and they’re looking at you, that’s such a rush. You just start going faster and faster. You’re trying stuff you don’t even think you can do. If it works, it works. If it doesn’t, you eat shit and run into some people.

You’re on auto pilot spontaneous craziness mode.
Boom. Boom. Boom. Whatever is going on in your mind, just do it.