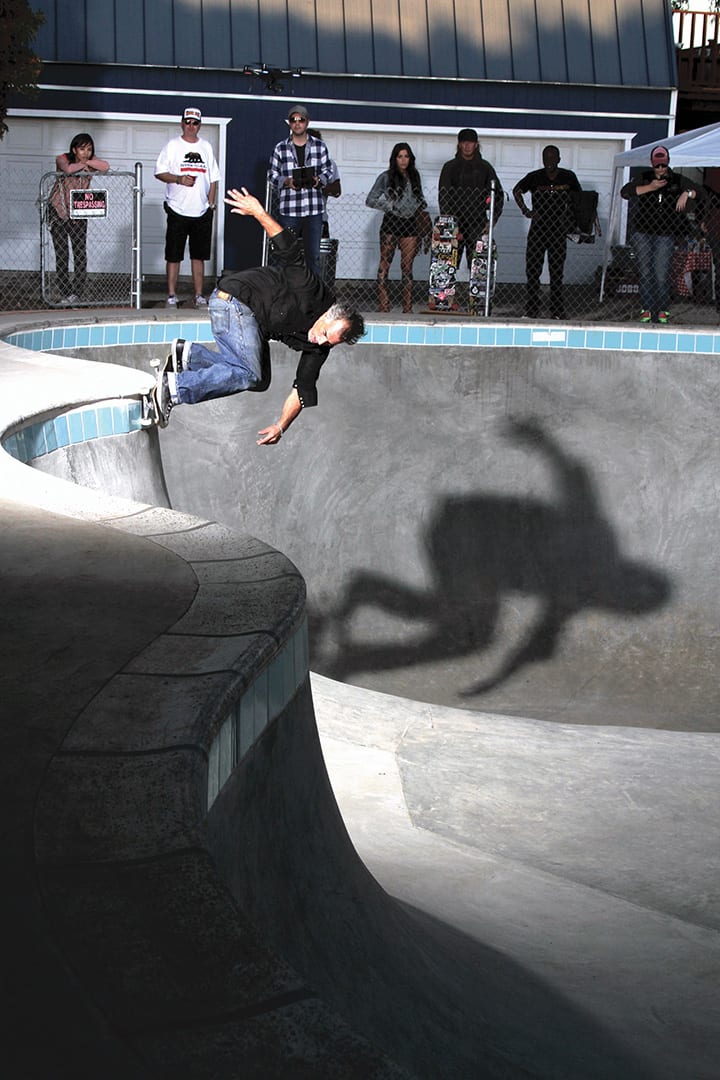 What’s the most fun skater-built spot that you’ve skated lately?
I love Burnside, FDR and San Pedro. I love DIYs.

Have you ever built something to skate?
I’ve built ramps and I helped pour the concrete for the pool at Concrete Wave back in the day. We were patting down the dirt at the age of 15. I think that was the first pool in a park actually. It was a figure-eight bowl, like a peanut snowman bowl with a top hat. The shallow end wasn’t rideable, but the deep end was. It was shotcrete, so it was hardcore. It geared me up to go to other pool contests. I’m a skatepark kid. I loved Carlsbad Skatepark. I liked Concrete Wave, Skatopia, Paramount, Lakewood, Chino, Marina Del Rey, Cherry Hill and Apple. Concrete Wave was the spot. Del Mar was great. All the skateparks were badass back in the day.

Who do you like to skate with the most these days?
I love skating with David Hackett and Lance Mountain and all the local kids. I love skating in Venice. It’s super fun. We used to have bad ass sessions in Glendale. I like skating with Ngoho and Danny Rogers. I like to skate with all of my friends and I like to skate with dudes that I don’t get to see all the time. I like this backyard pool in Palm Springs called The Yard. That’s fun. I haven’t gotten to ride Bucky’s. He’s like, “You’ll like this bowl. It’s nine feet deep.” I’m thinking, “Bitch, I used to wheel and grind Paramount’s 18-foot bowl.” I like Arto’s pool. Arto’s pool is fun. I like Angelo’s pool. Give me a good backyard pool. I like to throw a good grind on pool coping. That’s what I like the best.

Best skate graphic you’ve seen lately?
I’m down with my brother’s artwork for skateboards. I also like some of the ‘60s graphics. One of my favorite graphics is the Indy 500. It’s just two checkerboard flags with a helmet. It was more geared for racing in the late ‘60s and early ‘70s. It was badass. It was done by the same dude that did the Black Knight graphic. I like the Black Knight graphic too. It didn’t really have anything to do with skateboarding, but whatever. I’m not interested in pictures on the bottom of a skateboard. That’s boring. That’s not a graphic. That’s a picture. Graphics are graphics. Drawings are drawings.

What’s the best thing you’ve ridden in a skatepark?
I don’t think there is a best feature. There are no bad features. I like Venice. I like Glendale. I like Santa Monica. I like Etnies. I just like skateparks. I like that joint up in Newberg, Oregon. I love all the skateparks up there. I like this one pool they have up there. Lincoln City is badass. Pier Park is badass. Donald is really fun. I like Clairemont. I like that new park down in Encinitas. That pool is wickedly fun. I like Washington Street too. It’s badass. I like all skateparks.

Who are your favorite skateboarders?
I really really really liked Tony Alva and Jay Adams in their time. I thought TA was amazing. I thought Jay Adams was a badass at Del Mar in the loose ball bearings urethane days. Then there was this kid Stevie Monahan. I like Gregg Weaver. Brad Bowman was amazing. David Hackett was amazing. Salba is amazing. There are all the new kids and all the dudes from the ‘80s. It just goes on and on. I loved to watch Hosoi back in the day and I love to watch him skate now. I like watching all those dudes. It’s just badass. I like Pedro Barros and Greyson Fletcher. There are so many dudes that rip. I like watching Chad Muska skateboard. I like watching Nyjah Houston. It just keeps going. I’m not some narrow-minded dude. I like watching my son skateboard. He’s got a little Gerry Lopez thing going on in his skateboarding. Somehow some way he came through with that. He’s a cross between Rory Russell and Gerry Lopez. There are so many dudes that I enjoy watching skateboard and skateboarding with. I like Ngoho’s skateboarding. He’s smooth and stylish. I like Raven Tershy. I like all the new kids. I like Chris Russell. There are unknown dudes that rip. There’s Blake Johnson down in Venice and I love the way he skateboards. He rips. There’s a kid doing a manual down the street right now that looks kind of good. [Laughs] ‘Hey now!’ I enjoy skateboard riding and I just like watching dudes that enjoy skateboard riding.

Is there anything that hasn’t been built to skate yet, that you’d like to see built?
It’s in my brain. I haven’t built what I want to ride yet, but that could happen one day.

What’s one of the most fun road trips you ever took?
I had a super fun time when I went and skated with Hosoi, Hackett, McGill, Ngoho, Lester Kasai, Steve Steadham and all those cats down in Atlanta. It was so fun. It was a little hot. Hotlanta!

Are there any skate-related charities you support?
All of them. I don’t know the names of all of them.

What music have you been listening to lately?
There are thousands of bands that are really good. I like bands from Primal Scream to Benny Goodman to the Sex Pistols to the Ramones. I don’t even dislike the Spice Girls. I like N.W.A., Louis Jordan, Hound Dog Taylor, Big Mama Thornton, the Blasters, the Stray Cats, Mott the Hoople and T. Rex, Iggy Pop, the NY Dolls, Happy Mondays, Soup Dragons, Aerosmith, Zeppelin, Sabbath… I love Generation X. I like X Ray Spex, Bill Haley & His Comets, Eddie Cochran and Gene Vincent. I like the girl bands from the ‘60s. I like the Stones. I love reggae. I like all of it. It’s the greats to the greats.

Which skate shops do you support?
I go to the ones that are around my house, like Brooklyn Projects and Supreme. If I’m at the beach, I go to Rip City or Venice Originals.

Favorite skate photo of all time?
I have several. There are several of Jay Adams who is the most photogenic skater of all time. He could get himself into perfect positions. There is a skate photo of Gregg Weaver and a skate photo of Denis Shufeldt and a photo of T.A. There is a really beautiful picture of Luke Moore back in the day in ‘78 or ‘79, East Coast. I really like that photo that Ivory Serra shot of Andy Kessler pushing in the streets of New York that was on the cover of Juice. There are a lot of photos that are so fantastic. One of my other favorites is the Hackett frontside at Doris pool shot by Friedman. That might be the most ultimate skateboard frontside grind shot ever besides any shot of me. [Laughs] Just kidding.

What is your take on girls skateboarding?
If they dig what they’re doing, that’s fine by me. Do you want me to tell you the truth? I think they don’t need to skateboard like dudes. Girls are way more fluid and way more interesting to watch than a dude, but they try to emulate the guys and I think that’s the wrong approach. That’s just me. There’s a girl longboarder from Brazil and she does it with her own style and she rocks. She dances on her skateboard. I’ve always thought that girls shouldn’t try to be like the dudes. Be like a chick. It’s cool. That’s what makes the world go round. We’re different species, but we’re still humans. Make it cooler than what the dudes do, even though the dudes do pretty cool shit.

What skate memorabilia do you have that means the most to you?
My favorite thing that I got from skateboarding that I still have is my Skateboarder of the Year 1978 trophy. It’s kind of lame, so I put a G.I. Joe anti-anthrax mask on it and now it’s the coolest thing I have. It’s a really dope trophy.

Who contributes the most to your local skate scene?
Anyone who gives me anything. That’s a good contribution. [Laughs] I need boards, trucks, wheels and bearings. Hardware I can get.

What are the three coolest skate tricks to you?
I like the power slide a lot and I like a good mean Bert. I also think the ollie is amazing. I like frontside grinds and backside carving and frontside carving and airs. I like a lot of it. That’s more than three, but whatever. One of my favorite moves is the shifty, but that’s just me.

Do you think skateboarding should be in the Olympics?
Yes. Why not?