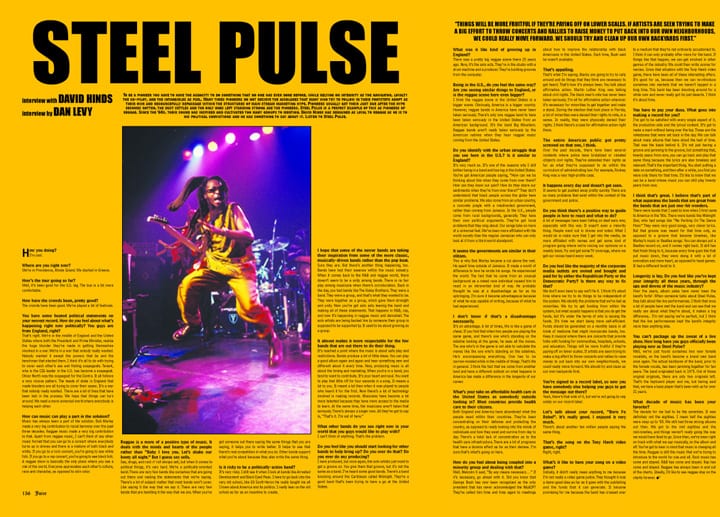 INTERVIEW WITH DAVID HINDS
INTERVIEW AND INTRODUCTION BY DAN LEVY

To be a pioneer, you have to have the audacity to do something that no one has ever done before, while relying on integrity as the navigator, loyalty the co-pilot, and the intangibles as fuel. Many times pioneers do not receive the accolades that many who try to follow in their footsteps adopt as their own and resourcefully repackage within the structures of main stream marketing hype. Pioneers usually get their just due after the hype becomes rotten, the dust settles and the only ones left standing strong are the pioneers. Steel Pulse is a perfect example of this as pioneers of reggae. Since the ’60s, their sound has inspired and cultivated too many groups to mention. David Hinds has remained as loyal to reggae as he is to his political convictions and he has something to say about it. Listen to Steel Pulse.

“THINGS WILL BE MORE FRUITFUL IF THEY’RE PAYING OFF ON LOWER SCALES. IF ARTISTS ARE SEEN TRYING TO MAKE A BIG EFFORT TO THROW CONCERTS AND RALLIES TO RAISE MONEY TO PUT BACK INTO OUR OWN NEIGHBORHOODS, WE COULD REALLY MOVE FORWARD. WE SHOULD TRY AND CLEAN UP OUR OWN BACKYARDS FIRST.”

How you doing?
I’m cool.

Where are you right now?
We’re in Providence, Rhode Island. We started in Greece.

How’s the tour going so far?
Well, it’s been good for the U.S. leg. The bus is a bit more comfortable.

How have the crowds been, pretty good?
The crowds have been good. We’ve played a lot of festivals.

You have some heated political statements on your newest record. How do you feel about what’s happening right now politically? You guys are from England, right?
That’s right. We’re in the middle of England and the United States where both the President and Prime Minister, realize the huge blunder they’ve made in getting themselves involved in a war. We’re in a war that nobody really wanted. Nobody wanted it except the powers that be and the henchman that elected them. I think it’s all to do with trying to cover each other’s ass and finding scapegoats. Tenent, who is the CIA leader in the U.S. has become a scapegoat. Oliver North was the scapegoat for the Contra. It all follows a very vicious pattern. The heads of state in England that made blunders are all trying to cover their asses. It’s a war that nobody really wanted. There are a lot of lives that have been lost in the process. We hope that things can turn around. We need a more universal world where everybody is helping each other.

How can music can play a part in the solution?
Music has always been a part of the solution. Bob Marley made a very big contribution to racial harmony over the past three decades. Reggae music made a very big contribution to that. Apart from reggae music, I can’t think of any other music format that you can go to a concert where everybody turns up in droves and there is a mixture of both black and white. If you go to a rock concert, you’re going to see white folk. If you go to a rap concert, you’re going to see black folk. A reggae show is basically the only place where you see a mix of the world. Everyone appreciates each culture, race and character, as opposed to skin color.

Reggae is a more of a positive type of music. It deals with the minds and hearts of the people rather than ‘Baby I love you. Let’s shake our booty all night.’ But I guess sex sells.
Sex, drugs, and rock n’ roll always sell, but when it comes to political things, it’s very hard. We’re a politically-oriented band. There are very few bands like ourselves that are going out there and making the statements that we’re saying. There’s a lot of subject matter that most bands won’t cover. Like saying it the way that we say it. There are very few bands that are handling it the way that we are. When you’ve got someone out there saying the same things that you are saying, it helps you to write better. It helps to see that there’s real competition in what you do. Other bands support what you’re about because they also write the same thing.

Is it risky to be a politically-active band?
It’s very risky. I still see it when I look at bands like Arrested Development and Black Eyed Peas. I have to go back into the very old school, like Gil Scott-Heron He really taught me all I knew about America and its politics. I really lean on the old school as far as an incentive to create.