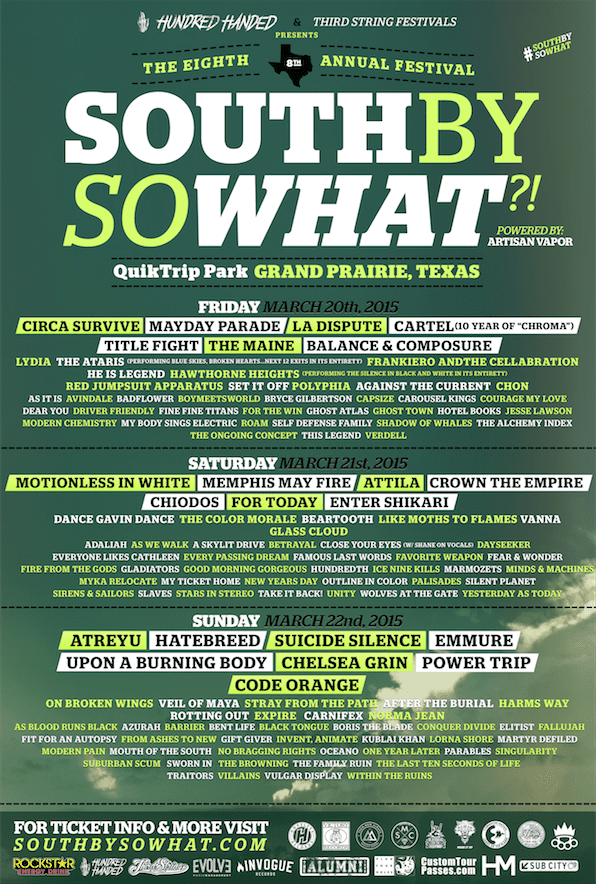 South By So What?!

Every year somebody comes up with an anti-festival festival for example Broke-chella and Outside Bands. Eight years ago, South By So What?! opened its doors in Dallas, Texas to folks who wanted to celebrate a different kind of music often not highlighted at other Texas festivals like SXSW or Austin City Limits. Featuring an eclectic mix of bands in the hardcore, metal, punk veins, the festival aims to promote live music and mainly rock ‘n roll. While they have continually expanded genres, the festival itself has stayed true to their raw raceway style.

[toggle title=”Press Release”]
The 8th Annual South By So What?! Music Festival is scheduled to take place on March 20th, 21st, & 22nd at QuikTrip Ballpark, right by downtown Dallas. This year’s festival showcases over 100 bands from a range of genres including major artists such as, Circa Survive, Motionless In White, Atreyu, Mayday Parade, Hatebreed, La Dispute, Memphis May Fire, Suicide Silence, Cartel, Chiodos, Crown The Empire, Balance & Composure, Emmure, The Maine, Title Fight, and more. Tickets for South By So What?! start at $50 for single day and $139 for 3-Day Passes. There are additional 3-Day ticket options including merch bundle, VIP, and VIP Elite that are all selling out fast. To purchase tickets for South By So What?!, please visit: http://bit.ly/SBSWTickets.

Purchase Tickets For South By So What?! here: bit.ly/SBSWTickets

“2014 blew my mind and the line up we have for 2015 is no exception,” declares Mike Ziemer, President of Third String Festivals and Founder of South By So What?! “We have been hard at work to diversify our festival while still staying true to the scene that we have been in for the last 11 years as promoters. Having bands like Circa Survive, La Dispute, Balance & Composure, Title Fight, Hatebreed, Power Trip, and others in the mix this year is positioning us to expand outside of just the Warped Tour / Bamboozle type world we have found ourselves in but also crossing into the Fun Fun Fun Fest / Riot Fest world and that’s really our goal.”

Each year, the festival always seems to have at least one ticket sold from all 48 states in the continental United States, as well as attracting international attendees. Ziemer states that, in addition to the U.S., he’s been talking with festival-goers from Japan, Australia, and Singapore, among others. Ziemer remarks, “…it’s crazy to me that our festival is reaching the level that it is and it’s very encouraging to myself and my team for all the handwork we have been putting into the festival for 8 years now.”

Ziemer continues, “This year’s festival is probably my favorite mix of bands. You have the red hot metalcore bands like Motionless In White, Attila, Memphis May Fire, Crown The Empire, and For Today on the same weekend as hardcore and metal veterans like Hatebreed, Atreyu, and Suicide Silence and you mix that in with a more chilled out day that includes Circa Survive, La Dispute, Mayday Parade, Cartel, The Maine, and many more and you’ve got a really awesome weekend. I feel like a lot of people have a diverse musical taste and will enjoy all three, if not two of the three, days.” With an emphasis placed on continuing to diversify genres at the festival, fans are sure to find bands they love playing each day of the 3-day event.

“Although the festival will be taking place this March, Ziemer and his team already have their eyes on expanding to even bigger things. “Moving forward into 2016 and beyond, we’ve been working on some very strategic partnerships to expand our festival to more markets than just Texas and will be changing our name to So What?! Music Festival to be more nationally and internationally relevant as we expand and take on new markets, it’s going to be an exciting next few years!”