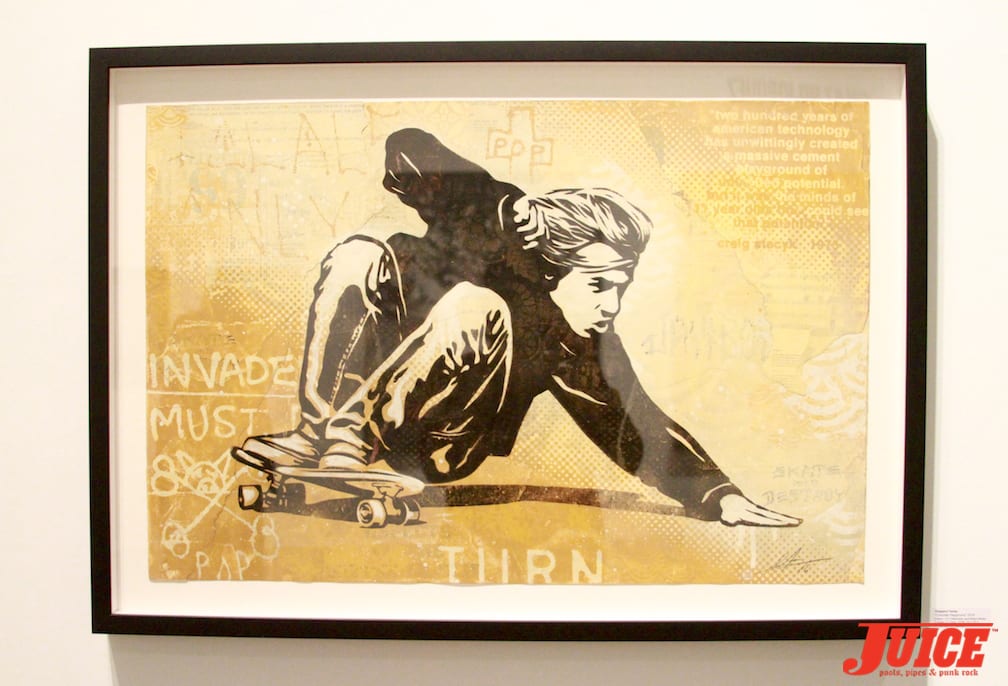 Chung King road in downtown Los Angeles has a spiritual and ritualistic ambience dressed with the smells of Chinese cooking and decorated with a swinging set of lanterns hanging in concert over a wide open walkway, lending authenticity to the allure of Eastern culture. When you arrive on gallery row, there is a tangible electricity in the air and the blend of art aficionados, musicians, street artists, curious youth, skateboarders and agent provocateurs make you feel as if you are in a movie. This night the Gregorio Escalante Gallery West was illuminated with progressive and distinctive works by three of the most respected street artists of modern times: C.R. Stecyk III, Chaz Bojorquez and Shepard Fairey. Stecyk brought iconic bright colorways supporting familiar imagery and, to those who have followed the genius of his work for decades, this showing was masterful in its curation. Chaz Bojorquez is undeniably one of the most important street artists of any era and the works he brought to the walls were irrefutable proof of his value and talent. In pure synergy with Pompeii and its cultural significance, it could be possible that, if Los Angeles were to be destroyed and resurrected, the hieroglyphics that may be found would most likely be the works of Chaz. Shepard Fairey and his offerings are deeply-rooted in anti-hero propaganda, portraying the aspect of an idea hiding in plain sight, with a twist of the knife into the corruptive influences over the masses that go mostly unnoticed. Greg Escalante did an exceptional job, as always, of hosting and curating this provocative pop up exhibition. Sons of Pompeii is on display at the Gregorio Escalante Gallery West (978 Chung King Rd, Los Angeles, California) through June 26, 2016, so you know what to do. It’s time to head on down to Chinatown… – Words by Dan Levy

Gregorio Escalante Gallery is pleased to announce the inaugural exhibition, SONS OF POMPEII, in their newly utilized space across from the gallery. Exhibiting works from C.R. Stecyk III, Chaz Bojorquez, and Shepard Fairey, this popup exhibition is sure to draw fans of these local Los Angeles legends. Captured in lava and ash, Pompeii was eerily and perfectly preserved after it was destroyed by the eruption of Mount Vesuvius in 79 A.D. Archaeologists uncovered a wealth of artifacts and remnants of life interrupted, including hints of the historical beginnings of modern graffiti. SONS OF POMPEII was inspired, in part, by the city and it’s history. While visiting Pompeii, each of the artists was struck by the immediacy of the ancient graffiti that told the stories and lives of the city’s inhabitants. Stretching across walls and swaths of space, these markings reflected the history of the city and unified its classes. Drawing upon that narrative, Stecyk, Bojorquez, and Fairey, use the history of mark-making to launch their exhibition. SONS OF POMPEII utilizes imagery from street art to institutionalized paintings to communicate a sense of solidarity in an ever-changing city, and strives to bridge the gaps between different classes in contemporary Los Angeles.

C.R. Stecyk III has a vast oeuvre of work spanning over forty years. Utilizing letterpress, intaglio, lithograph, and printmaking techniques with the methodology and formats of trade printing, Stecyk creates poster works that question preexisting symbols. His pieces create an unstructured interaction that seeks to create a disruptive communicative element with a public audience, choosing to post much of his work amidst forlorn vistas and ubiquitous background imagery. Stecyk has exhibited internationally and locally, with much of his work included in public museums collections including the King Stephen Museum in Hungary, the National Art Gallery of New Zealand, the Israeli National Museum, the Smithsonian Institute, and the Museum of Contemporary Art in Los Angeles. He has collaborated with a wide variety of creatives including Miki Dora, LeBron James, Shepard Fairey, Barry McGee, Greg Noll, Pete Carroll, Von Dutch, Tony Hawk, and Ed “Big Daddy” Roth.

Chaz Bojorquez creates works with a variety of influences from Asian calligraphy to Cholo style graffiti, using the paintings to ask oftentimes difficult questions about himself and the role of graffiti in regards to cultural identity and history. After embarking on a three year round-the-world experience, living and visiting 35 countries, Bojorquez began to explore the relationship between graphics and letters and expressing culture and national pride. Bojorquez has exhibited in over 64 museums internationally and locally, with work residing in the permanent collections of the Smithsonian Institute, Los Angeles County Museum of Art, the National Hispanic Cultural Center of New Mexico, the de Young Museum, and the Mexican Fine Arts Center Museum in Chicago. He recently collaborated with Slick and David Flores on a mural at the legendary Hollywood Recording Studios in Hollywood.

Shepard Fairey has become a name synonymous with street art. Expanding on the legacies of pop artists and combining elements of graffiti, pop art, and commercial art, his practice disrupts the distinction between fine and commercial art. Fairey’s work is largely concerned with the role and perception of propaganda, portraiture, and political power. He has most exhibited at Merry Karnowsky Gallery, Pace, Deitch Projects, Exit Gallery, and the Centro de Arte Contemporaneo de Malaga. His mural works can be seen from Los Angeles, to New York City, Johannesburg,