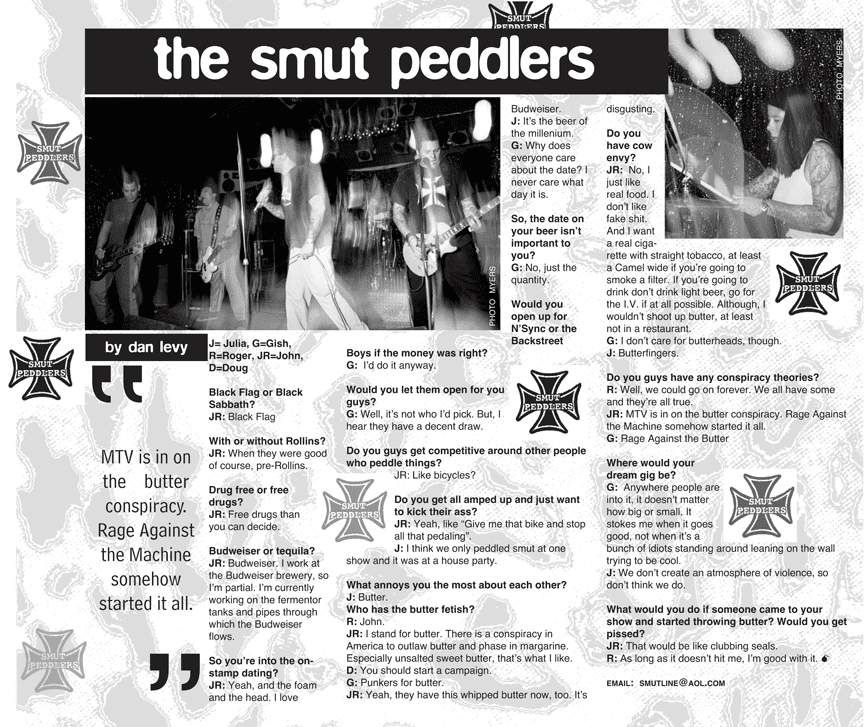 MTV is in on the butter conspiracy. Rage Against the Machine somehow started it all.

With or without Rollins?
JR: When they were good of course, pre-Rollins.

Drug free or free drugs?
JR: Free drugs than you can decide.

Budweiser or tequila?
JR: Budweiser. I work at the Budweiser brewery, so I’m partial. I’m currently working on the fermentor tanks and pipes through which the Budweiser flows.

So you’re into the on-stamp dating?
JR: Yeah, and the foam and the head. I love Budweiser.
J: It’s the beer of the millennium.
G: Why does everyone care about the date? I never care what day it is.

So, the date on your beer isn’t important to you?
G: No, just the quantity.

Would you open up for N’Sync or the Backstreet Boys if the money was right?
G:  I’d do it anyway.

Would you let them open for you guys?
G: Well, it’s not who I’d pick. But, I hear they have a decent draw.

Do you guys get competitive around other people who peddle things?
JR: Like bicycles?

Do you get all amped up and just want to kick their ass?
JR: Yeah, like “Give me that bike and stop all that pedaling”.
J: I think we only peddled smut at one show and it was at a house party.

What annoys you the most about each other?
J: Butter.

Who has the butter fetish?
R: John.
JR: I stand for butter. There is a conspiracy in America to outlaw butter and phase in margarine. Especially unsalted sweet butter, that’s what I like.
D: You should start a campaign.
G: Punkers for butter.
JR: Yeah, they have this whipped butter now, too. It’s disgusting.

Do you have cow envy?
JR:  No, I just like real food. I don’t like fake shit. And I want a real cigarette with straight tobacco, at least a Camel wide if you’re going to smoke a filter. If you’re going to drink don’t drink light beer, go for the I.V. if at all possible. Although, I wouldn’t shoot up butter, at least not in a restaurant.
G: I don’t care for butterheads, though.
J: Butterfingers.

Do you guys have any conspiracy theories?
R: Well, we could go on forever. We all have some and they’re all true.
JR: MTV is in on the butter conspiracy. Rage Against the Machine somehow started it all.
G: Rage Against the Butter

Where would your dream gig be?
G:  Anywhere people are into it, it doesn’t matter how big or small. It stokes me when it goes good, not when it’s a bunch of idiots standing around leaning on the wall trying to be cool.
J: We don’t create an atmosphere of violence, so don’t think we do.

What would you do if someone came to your show and started throwing butter? Would you get pissed?
JR: That would be like clubbing seals.
R: As long as it doesn’t hit me, I’m good with it.