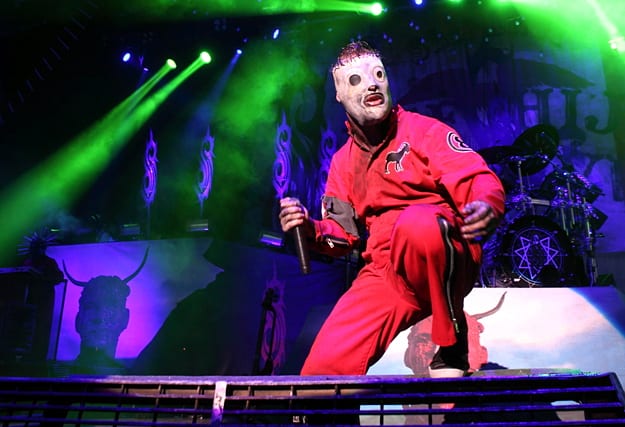 Slipknot’s KNOTFEST–the most cutting edge heavy music festival in America–has revealed initial details about Stage 004 at the October 24-26 destination festival held at San Manuel Amphitheater & Campgrounds in San Bernardino, CA. TheHeadbang For The Highway Stage Presented By Zippo Encore will give the best regional and local metal bands the opportunity to battle it out for the chance to be part of the biggest metal show to hit the U.S. in years.

Headbang For The Highway battles, sponsored by Brick House Studios and The Alumni Tour, are being held in the southwestern U.S. and California through October 19 to determine the final slots on this year’s KNOTFEST. For more information, go tohttp://headbangforthehighway.com/.

These Battle-of-the-Bands winners will join a lineup that features some of the most powerful names in metal–including Slipknot, Danzig, Five Finger Death Punch,Volbeat, Of Mice & Men, Anthrax and more.

As previously announced, Slipknot will close Stage 001 both Saturday and Sunday, with unique sets each night, featuring brand new music and an entirely new stage set and experience. In addition, all KNOTFEST online ticket purchasers (and those that purchase tickets before October 5 to Slipknot’s headline tour with Korn and King 810) will receive a digital download of the new album, delivered 24 hours early.

KNOTFEST–powered by Rockstar Energy Drink–will feature a Slipknot-curated lineup of over 60 bands performing on five stages on Saturday and Sunday, as well as a Friday night VIP Pre-Party Bash, band performances and other activities for those that have purchased VIP or Camping Packages.

Headbang For The Highway’s The Battle For KNOTFEST is taking place at the following locations:

Every KNOTFEST has been a fully immersive experience for fans, and this one ups the ante. In addition to performances from more than 60 of the heaviest bands on the planet, attendees will descend into an apocalyptic underworld featuring over 20 festival attractions including a Slipknot Museum (curated by the band), carnival rides, a zip line across the festival grounds, drum circles, a massive display of fire,freaks, fire-breathers, stilt-walkers, and much more.

KNOTFEST tickets are on sale now and going fast at www.knotfest.com. A limited number of VIP packages are still available. Camping packages and pit tickets are SOLD OUT.

KNOTFEST is a short drive from San Francisco, Las Vegas, Phoenix, Tucson, San Diego, the San Joaquin Valley, and many more cities in the Southwestern USA.