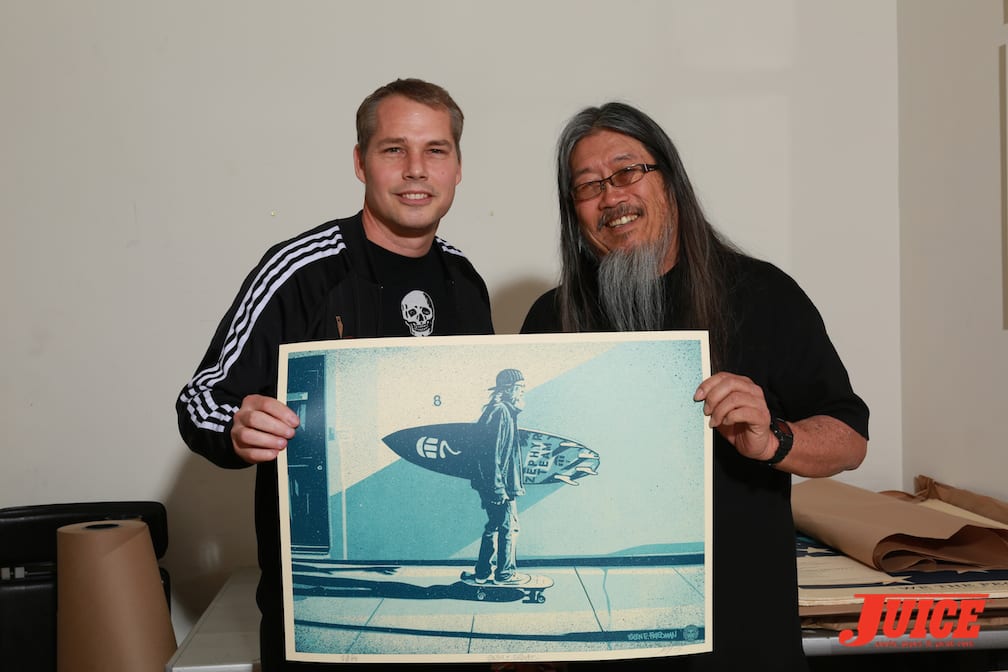 The Shepard Fairey x Glen E. Friedman x Jeff Ho collaboration print is being released 04/06 at 10AM PST at www.OBEYGIANT.com store under Prints. Limited edition 18”x24” prints, only 300 of each color way, blue and gold, numbered and signed by Jeff, Shepard and Glen. Limit 1 per person/household. Check out the video for the story behind the print below and read essays from Shepard Fairey, Glen E. Friedman and Jeff Ho about the collaboration print here…  Jeff Ho’s Zephyr skateboards, t-shirts and a new line of hats are available now at the Juice Magazine shop page here at www.JuiceMagazine.com. 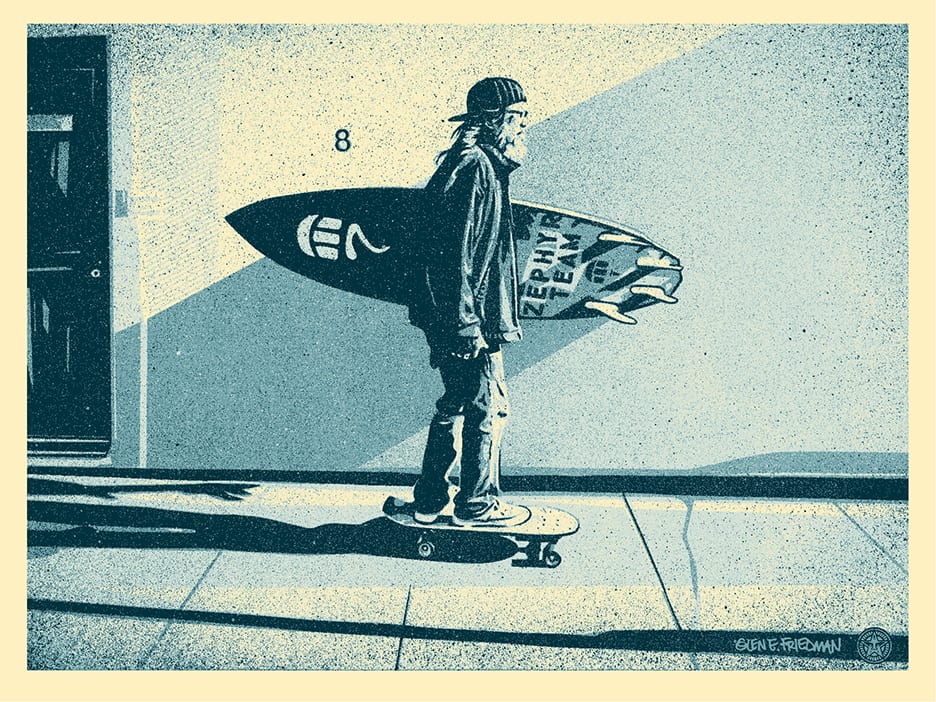 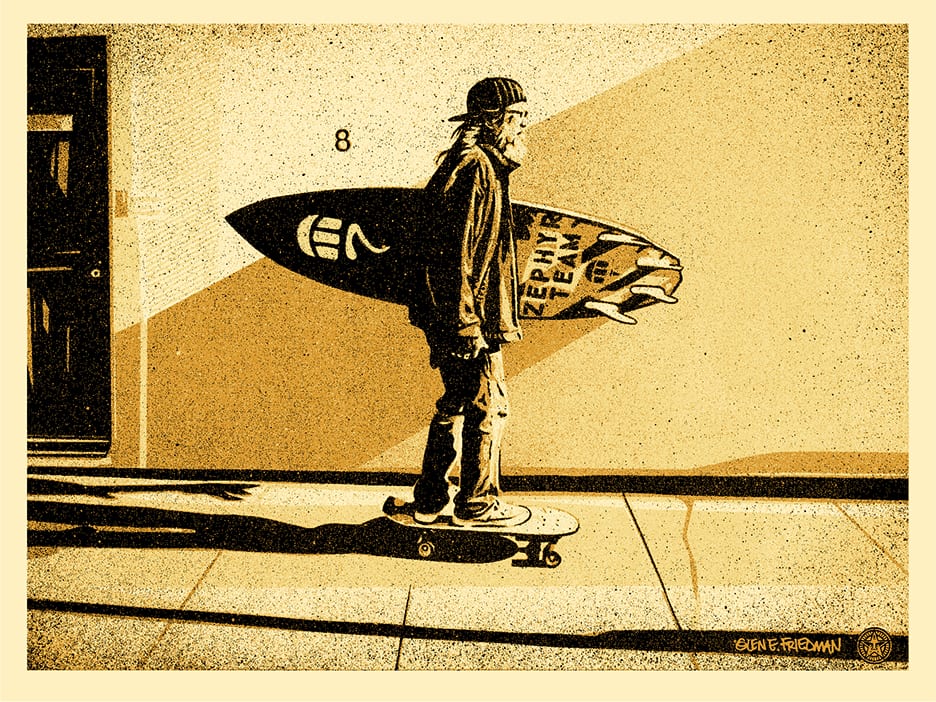 “My first thought about this image is that surfing and skateboarding have always been naturally combined. I love the water and I love rolling around on a skateboard. I built my first skateboard in the ‘50s and my first surfboard in the ‘60s, and I still surf and skate and love it. I enjoy all of the things that I have learned besides just the function of making boards, like creating the art that goes along with it. Surfing and skating have a symbiotic relationship – it’s just a natural thing.

In this photo, I’ve got my Zephyr team surfboard and I’m riding my personal Zephyr skateboard. My brand is Zephyr and the logo is something I’ve been using my whole life. There are some vintage markings on my winged tri-tail surfboard, but this is a modern version of something I made in 1976. I brought it up to current times with the quad thruster design. Going from the traditional longboard to a shorter board changed surfing, and I have always experimented with lighter materials and different board shapes. Making a board shorter makes it easier to whip around because of the smaller turning radius. Surf skate style can be fluid and smooth, but it can also be aggressive when attacking the lip, just like attacking the coping of a pool when you’re skating.

There’s a similarity between surfing a wave and skating a pool and there’s an attitude too. My goal was to be progressive and do things that weren’t the status quo and build equipment that would take you there and allow you to do something that hasn’t been done before. The Zephyr competition team had the attitude and the aggression and the surf skate style was naturally in their DNA. I nurtured that and gave them surfboards and skateboards and then pushed them out into the world. In this photo, I was wearing Levis, Vans and a Zephyr jacket, shirt and hat, which is what I provided to the Z-Boys to give them a sense of identity. This image creatively represents the 50 years that I’ve been skating, surfing and building boards.

Glen E. Friedman, world-renowned photographer and author, took this original photograph, and the image says everything – surf and skate. Glen is a straight up guy and a good friend, so when he called me to ask if he could make a portrait, I was stoked. I grabbed my surfboard and skateboard and met him down at the Venice Skatepark. He felt as though we made a solid portrait with just six photos shot then he said, “Let’s get a skating shot.” We were on Horizon or Market street just off the strand in Venice, and he ran ahead of me on the street and said, “Skate by this wall and I’ll see if I can make a photo I like.” I was skating along and he made the single photo, just one attempt, and said, “I got it.” The whole time he only shot six or seven photos, it was the end of a roll he wanted to finish. Well, it’s film, so nobody knows what’s on there until it gets developed. But as soon as Glen sent me the photos, I loved them, and I was like, “Damn, homie knows how to shoot photos.” There were three really outstanding images and this one was number 37 of 36 frames on that roll of black and white. It was the end cut, full frame. Sometimes a photographer can stretch an extra frame out of a roll, and this was one of those. That’s tight and the shot is beautiful. Glen used it in his book, “My Rules”, and Shepard chose this photo for the poster, which is really cool.

Shepard Fairey is a globally recognized, iconic artist and political activist and I have so much respect for all the art he has given to the world. I’ve always admired Shepard and I have a lot of love for what he’s done for our culture and I am so honored to have been included in his body of work. He’s made so many iconic posters and this one really looks incredible. I’m so impressed with how he used the shadowing and the colors. I don’t know if I’m the first surfer on a Shepard Fairey poster, but I think I’m the first surfboard builder, which is amazing. We had some discussions about the poster because one of Shepard’s favorite colors is red and I said, “Could we do a blue one?” So Shepard made a blue one and there was an option for another color and he made the gold-colored poster. When he showed them to me, they were rad. I love them both and can’t decide which one is my favorite. Working with Shepard has been an awesome experience and I truly appreciate the art that he has created.

This limited edition poster features an iconic photo by Glen E. Friedman, with exceptional art by Shepard Fairey, which has been autographed by all three of us. Thanks to Shepard and thanks to Glen. I’m honored to work with them both.

The collaboration print is being released tomorrow, 04/06, at 10AM PST at www.OBEYGIANT.com store under Prints.

You can find my Zephyr shirts, hats, and skateboards here.” 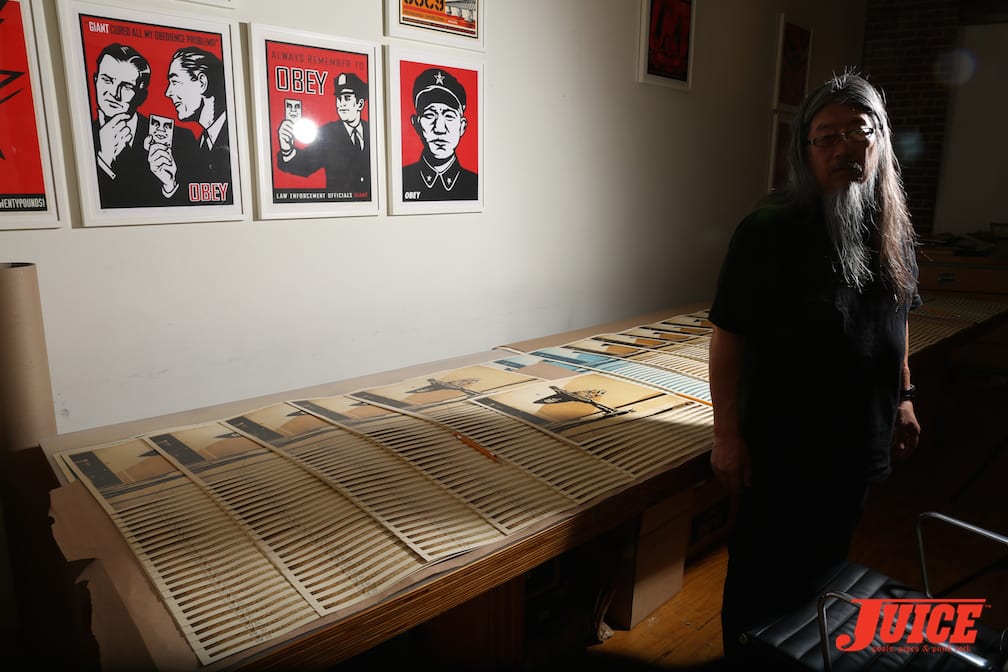 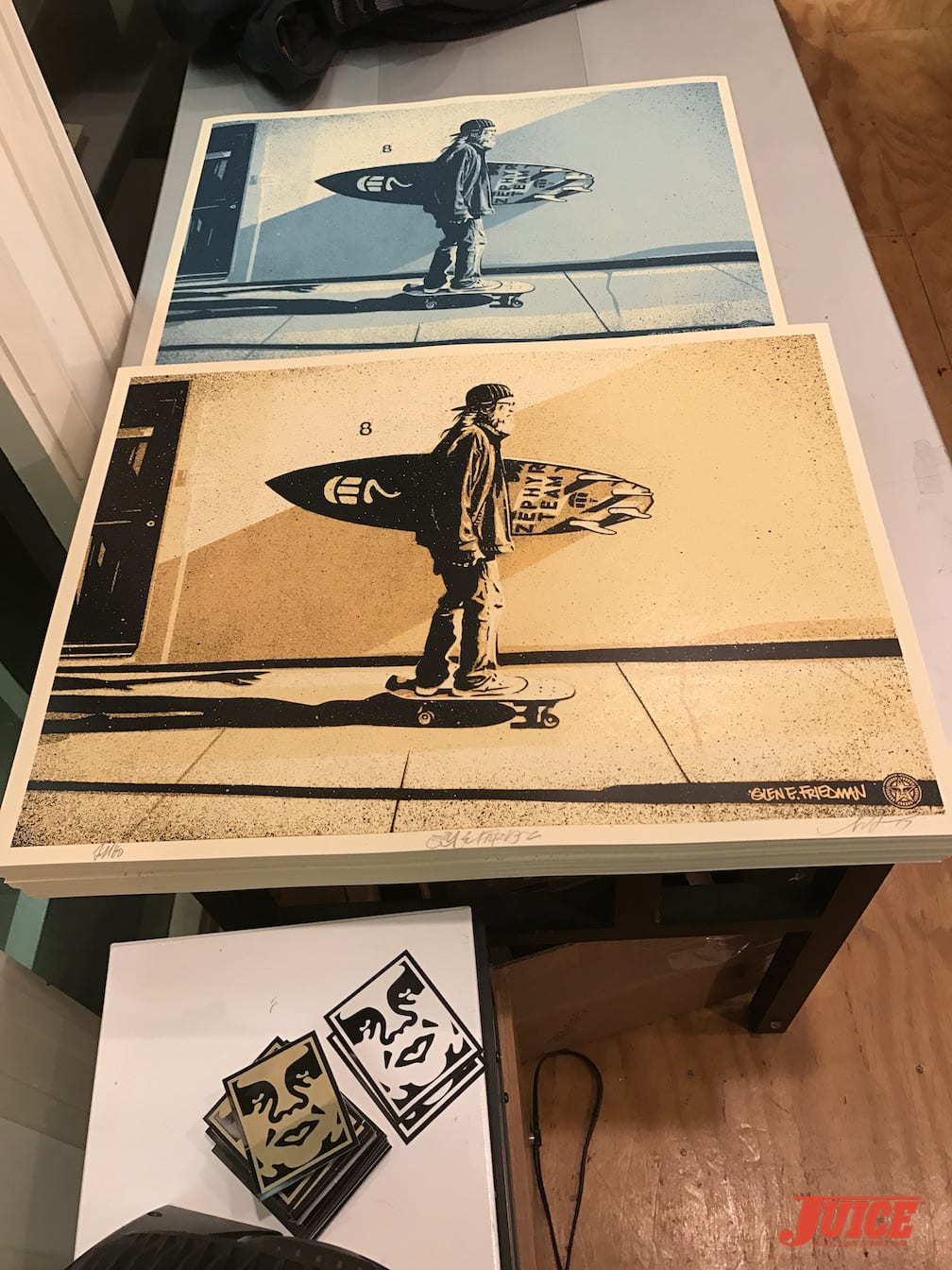 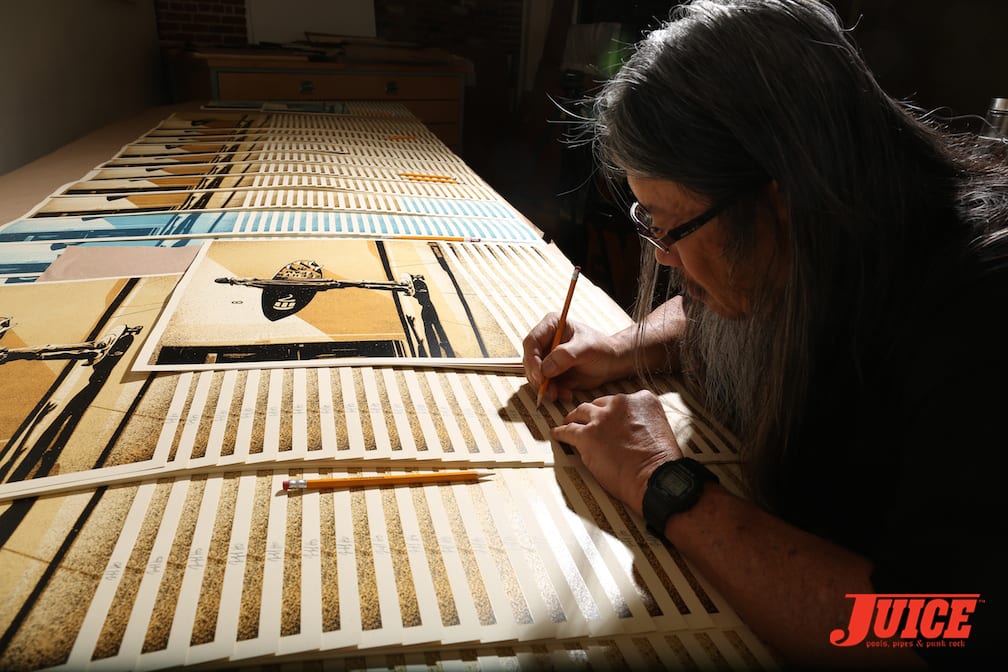 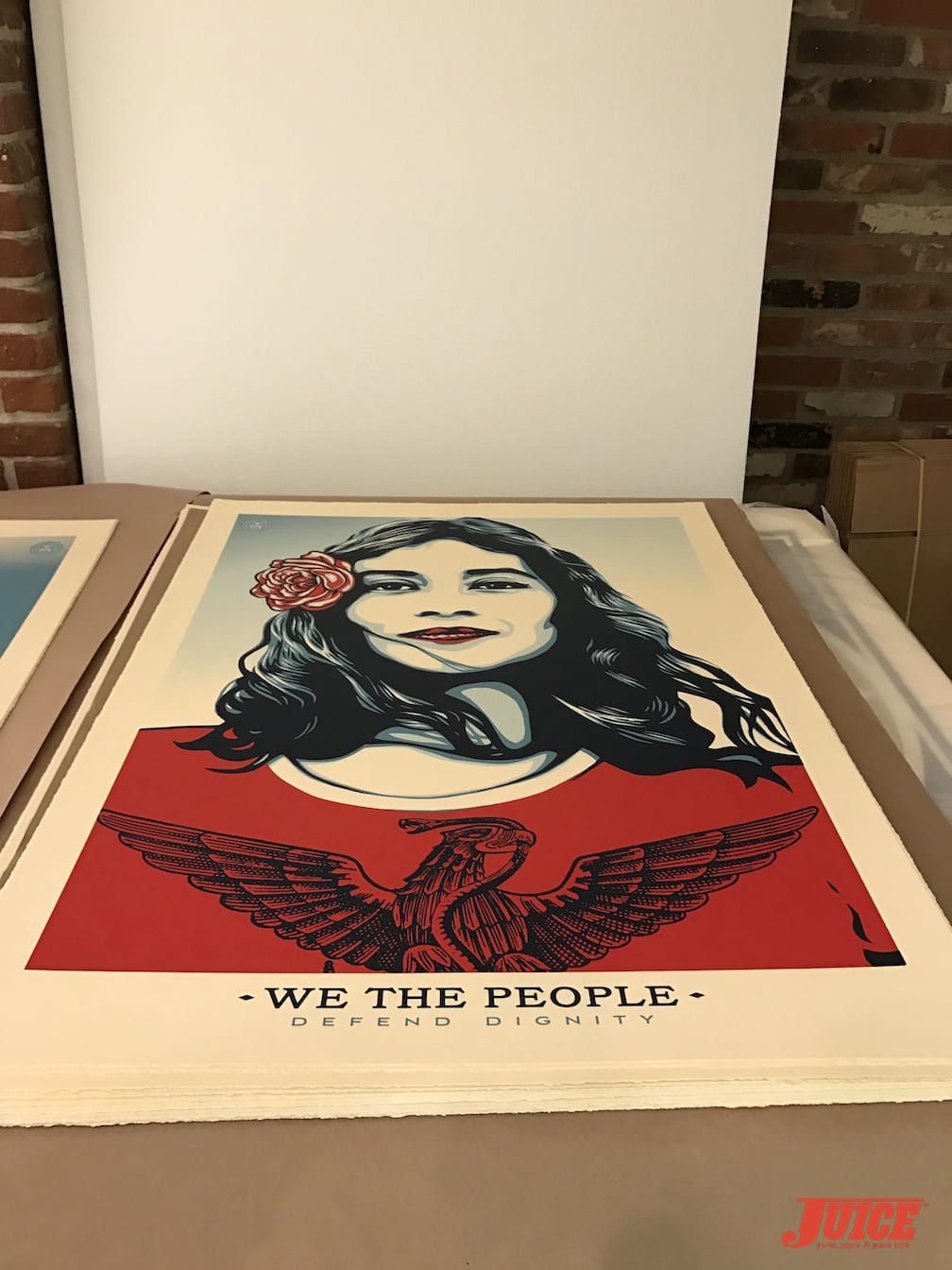 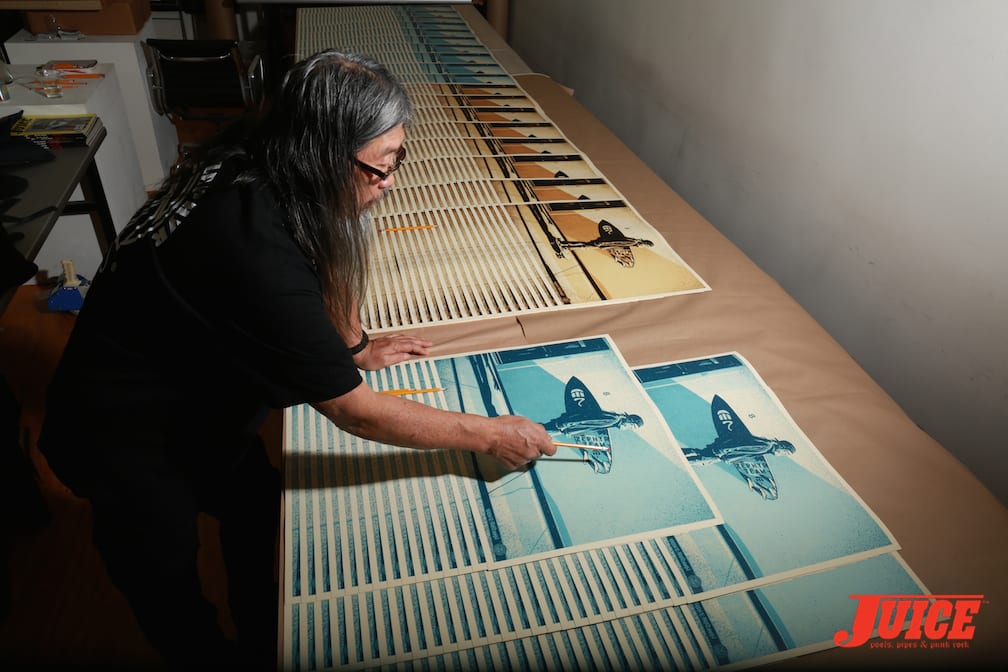 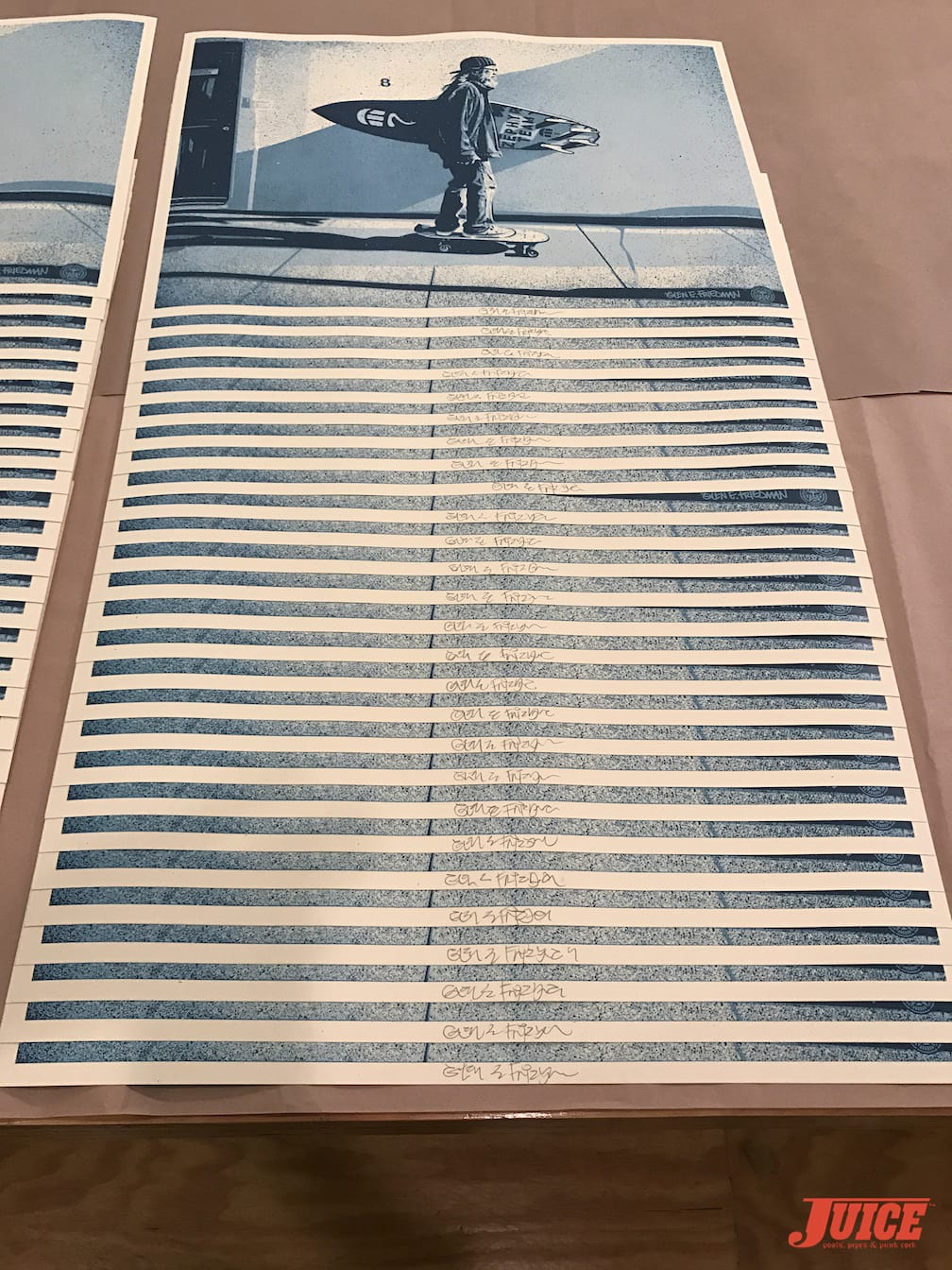 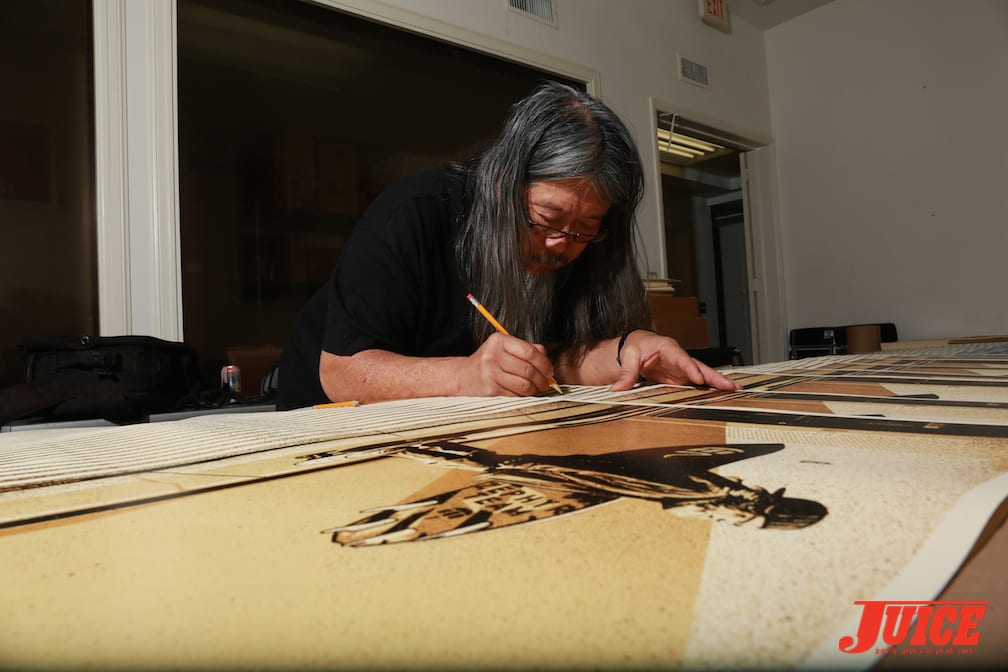 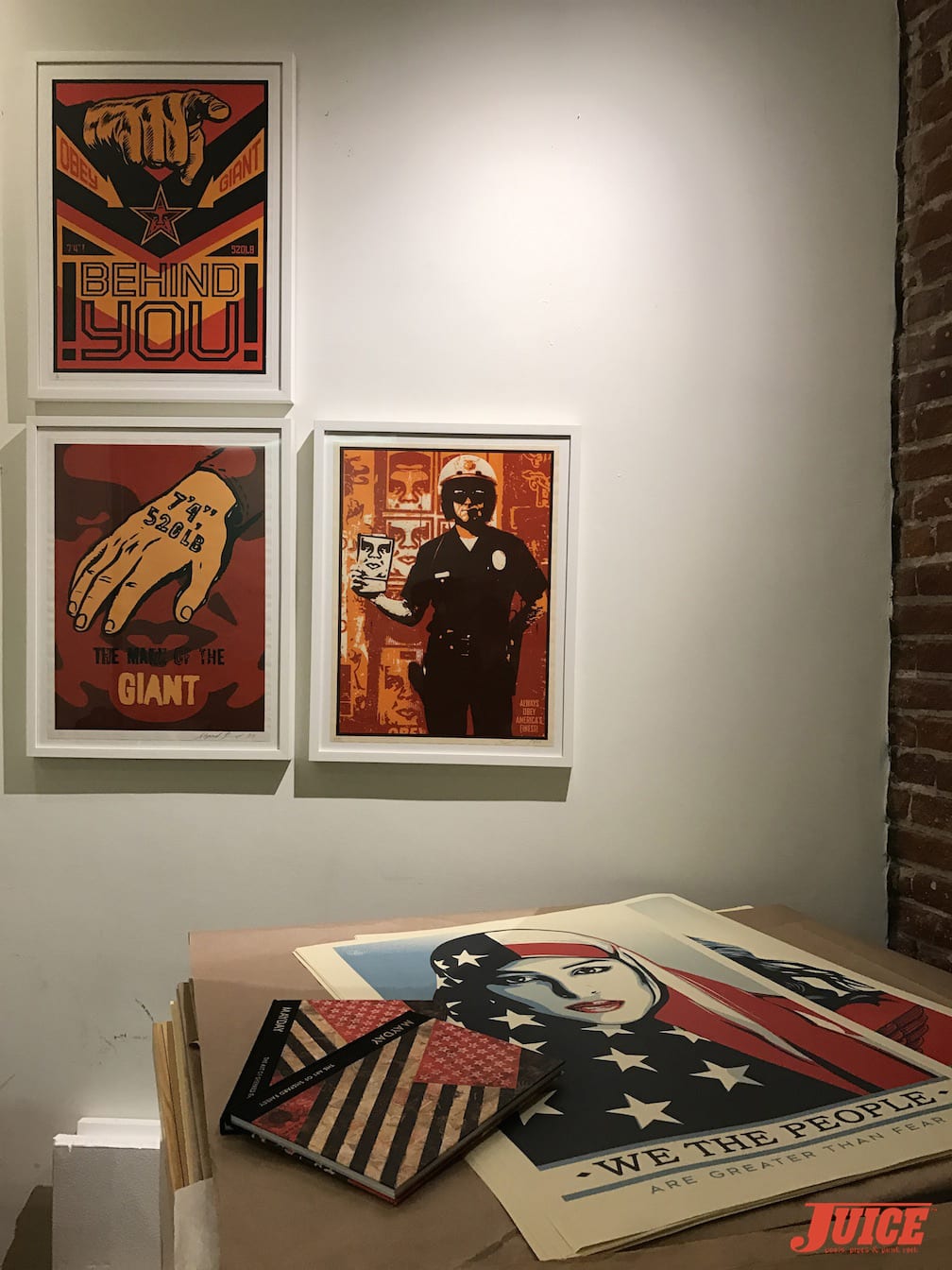 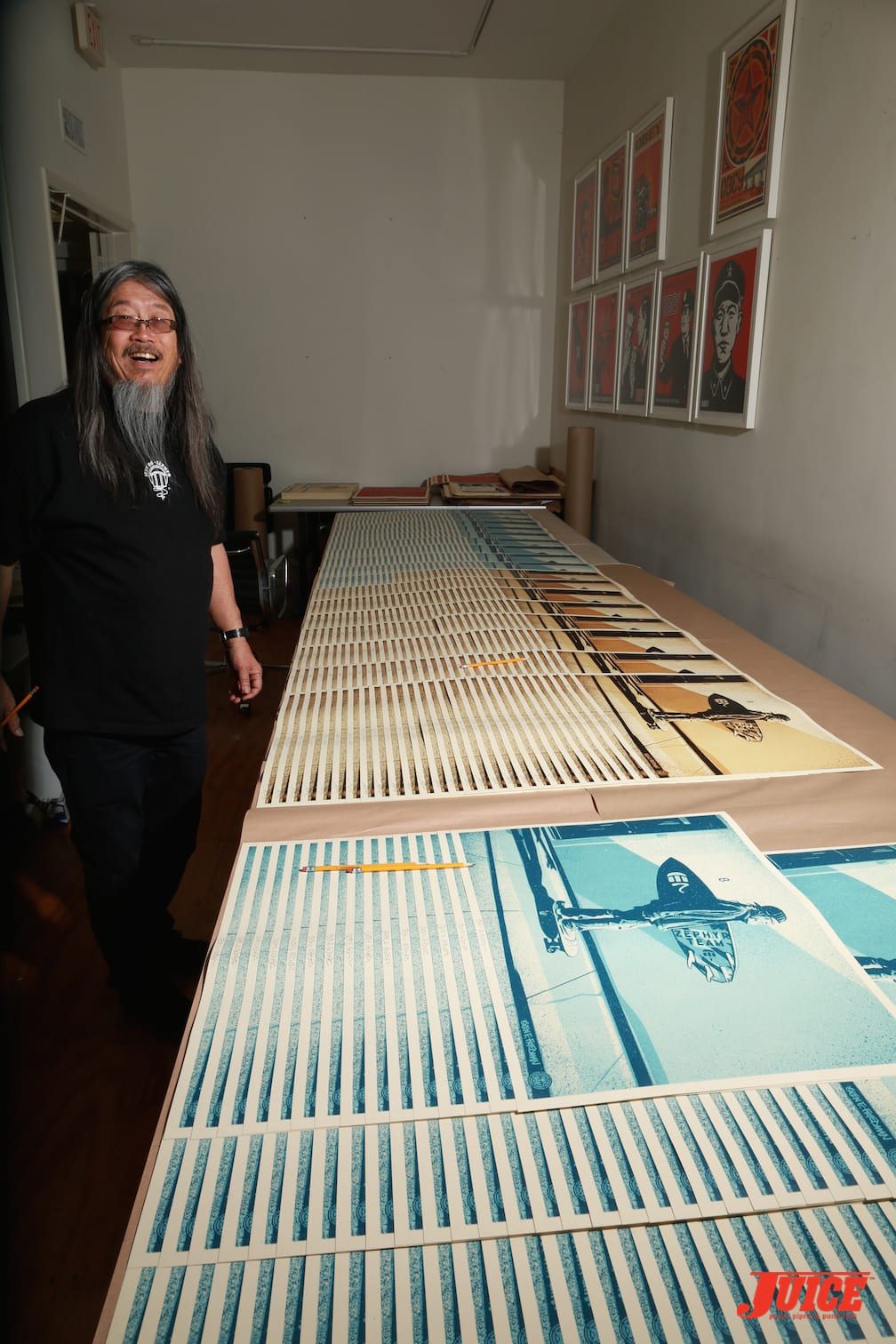 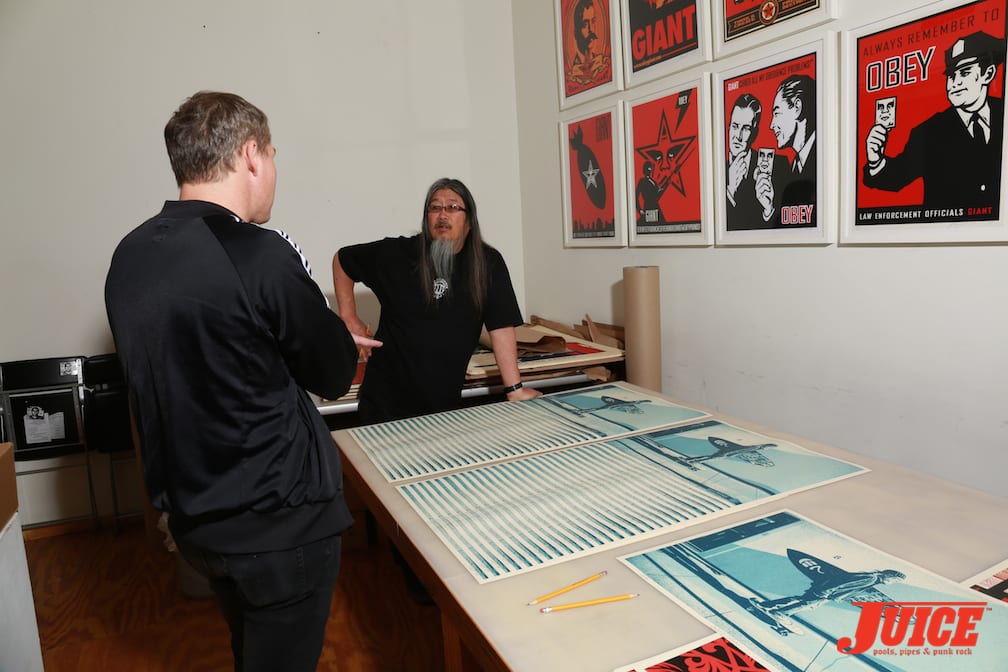 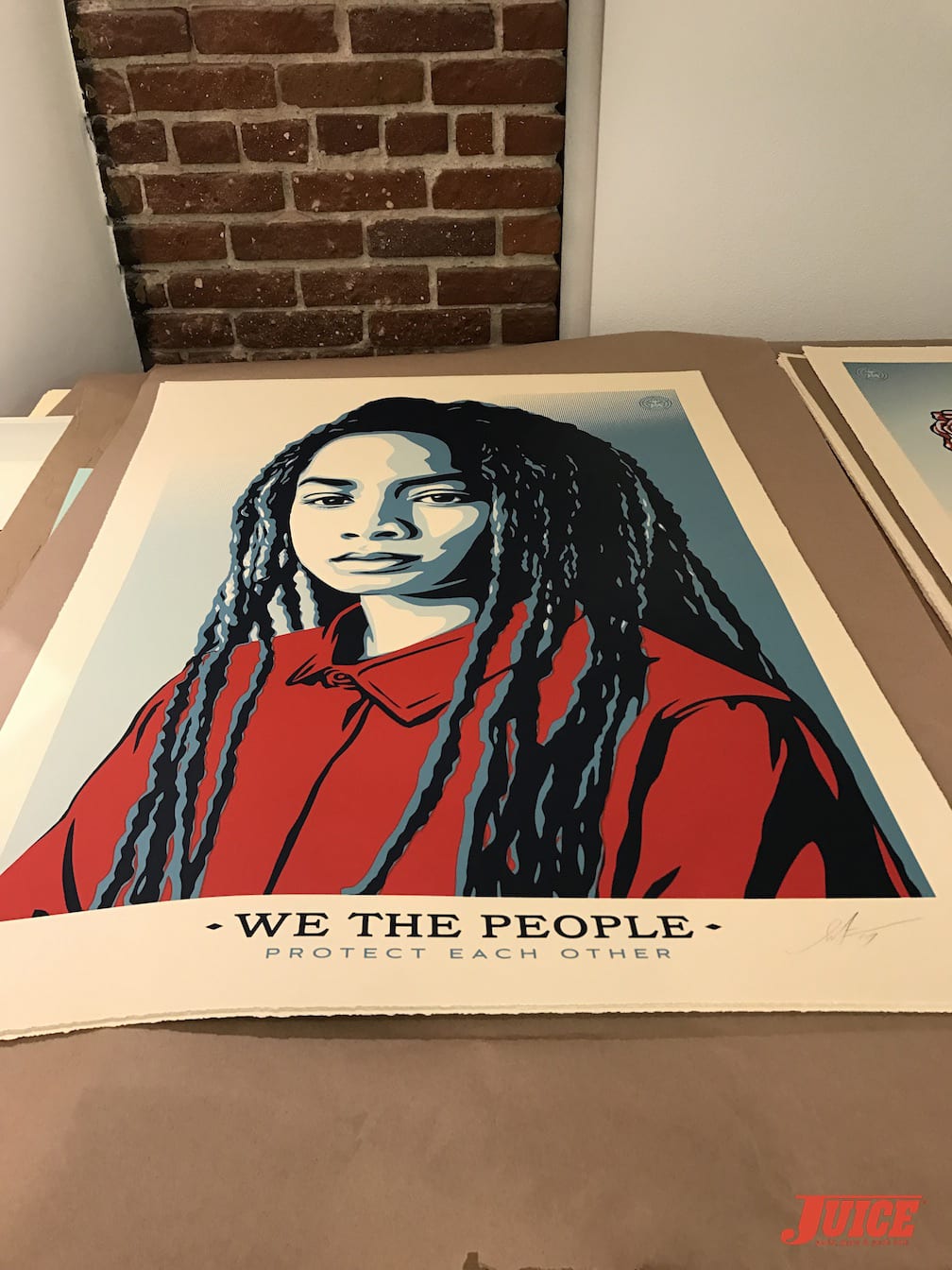 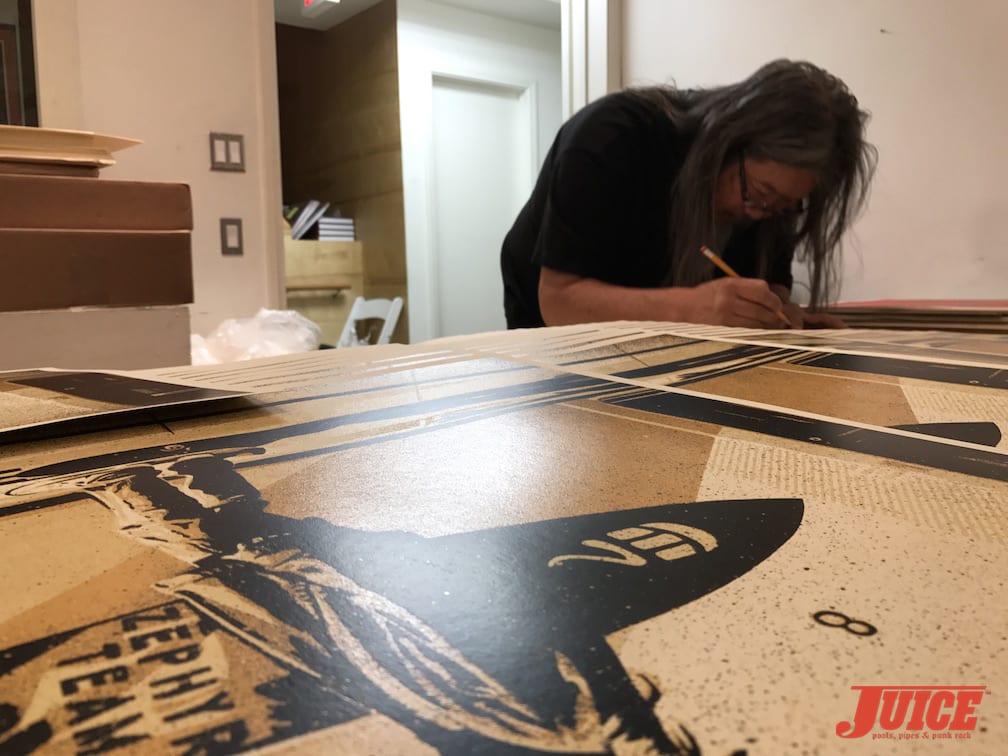 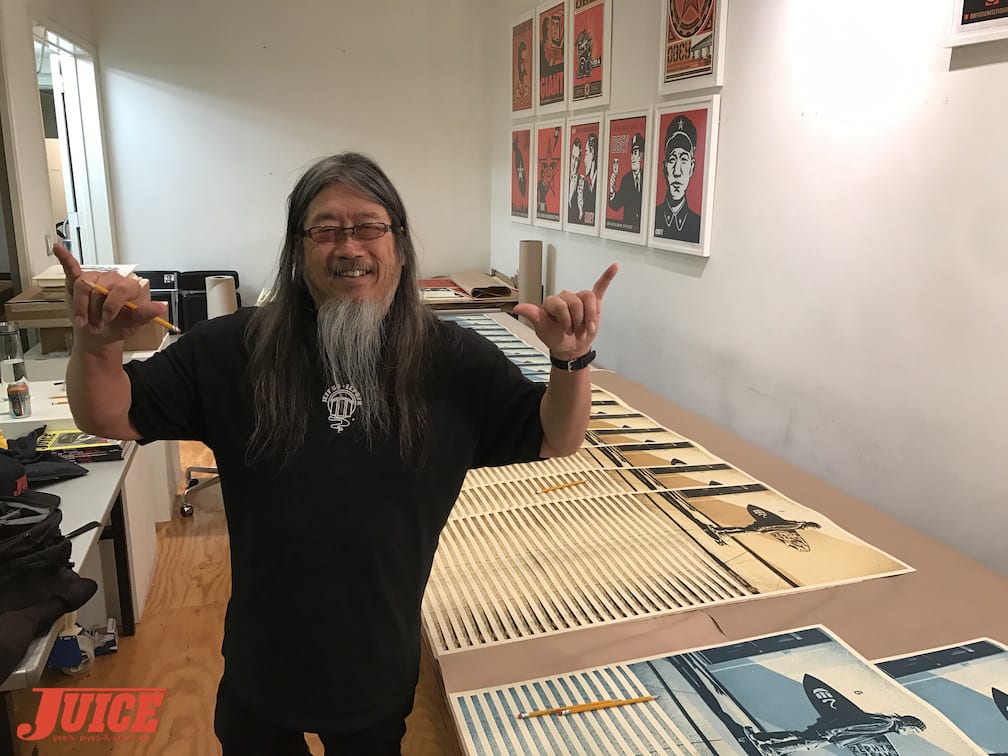