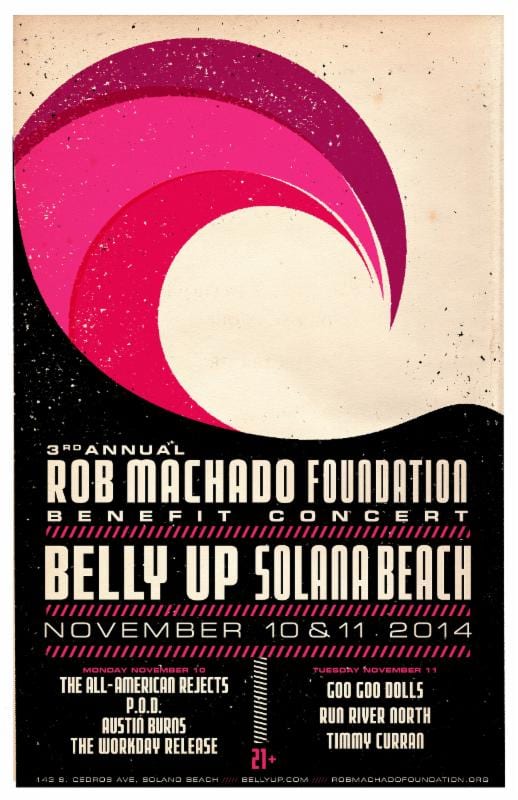 LOS ANGELES, CA – SEPTEMBER 15, 2014 – The Rob Machado Foundation (RMF, http://robmachadofoundation.org) – founded by legendary surfer, environmental activist and musician Rob Machado – is partnering once again with The Belly Up in San Diego, CA for its annual benefit concert. Tickets sold out so quickly for the foundation’s 2012 and 2013 concerts that Machado has made plans for the 2014 event to take place over the course of two consecutive nights – November 10 & 11.

Each evening will feature a stellar line-up of artists taking the stage at this intimate venue. The All-American Rejects, P.O.D., Austin Burns and The Workday Release will play on Monday, November 10. Goo Goo Dolls, Run River North and Timmy Curran will perform on Tuesday, November 11. Doors will open at 7:00 p.m. and the show will begin at 8:00 p.m. each evening.

Tickets will go on sale this Friday, September 19, at noon PT here for Monday’s show and here for Tuesday’s show. In addition to general admission tickets, a limited number of VIP packages – featuring early admission, a 6 p.m. meet and greet with Rob Machado and Goo Goo Dolls and an exclusive backpack – will be available for the November 11 show. For additional details, visit http://robmachadofoundation.org.

“I’d like to thank all the musicians who are performing at our charity benefit, some of them for the second or third year, and the fans, who always make it a great night and help us raise the money we need to fund programs that have a real impact on the environment year-round,” said Rob Machado.

Proceeds from the evening will benefit the Rob Machado Foundation, a California-based 501c(3) non-profit private foundation. Founded in 2004, RMF was created to support charities dedicated to environmental programs worldwide. Its primary mission is to provide funding and initiate educational programs focused on helping children understand their contribution towards a healthy earth. With funds raised in the past year – including the sold-out 2013 benefit concert – RMF was able to:

Shatter waste diversion records at the 2014 Switchfoot Bro Am, held at Moonlight Beach in Encinitas. The 87 volunteers from RMF’s Green Team recycled 892 pounds of waste – a 56% diversion rate. For the first time in Switchfoot Bro Am’s 10-year history, more waste was recycled than thrown away.
Install new, more effective trashcans at Cardiff State Beach. The new covered cans prevent seagulls and winds from dispersing trash across the beach and into the water. Made from 100% reclaimed material, the cans were designed by local artisans eVocal and installed in partnership with California State Parks.
Co-sponsor the Grow Your Own program at the Solana Center, where teachers were trained by an instructor from the Ecology Center on how to start and lead school gardens.
Sponsor Family Ocean Night, an evening of ocean education for the kids and the entire Cardiff community, at Cardiff Elementary in Spring 2014.
Install recycling bins at local elementary and high schools where no recycling opportunities existed.
Serve as a non-profit partner for Jack Johnson’s From Here to Now to You tour and host a booth at Johnson’s August 30 concert in San Diego.

About Rob Machado
Rob Machado is not just one of the world’s greatest surfers; he’s one of the sport’s most recognizable characters, a living icon who continues to expand the definition of what professional surfing is all about. Machado was consistently among the top seeded competitors while on the ASP World Tour. With 12 career WCT victories, Machado has been among the elite top ten most popular surfers since 1996 on Surfer Magazine’s Surfer Poll. He was inducted into the Surfer’s Hall of Fame in 2000, awarded the prestigious honor of Waterman’s of the Year by the Surf Industry Manufacturers Association (SIMA) in 2009 and, in 2011, the City of Huntington Beach California awarded him a star on the Surfing Walk of Fame.

Since his departure from the ASP tour in 2001, Machado has been one of surfing’s most committed ambassadors, roaming the globe, surfing the world’s best waves and deepening his commitment to support various humanitarian and environmental organizations.  In 2009 he was the recipient of the One Degree Less Award from Planet Green + the Water Council of Brazil Project and recognized by Oceana for his dedication to environmental activism.