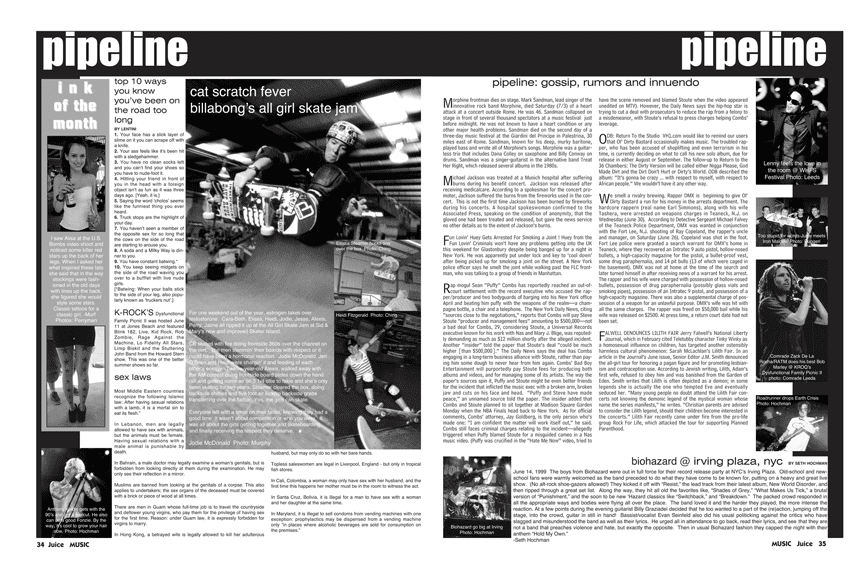 Ink of the Month

I saw Alisa at the U.S. Bombs video shoot and noticed some killer red stars up the back of her legs. When I asked her what inspired these tats she said that in the way stockings were fashioned in the old days with lines up the back, she figured she would style some stars. Classic tattoos for a classic girl. – Murf
Photos: Perryman

TOP 10 WAYS YOU KNOW YOU’VE BEEN ON THE ROAD TOO LONG.
by Lentini
1. Your face has a slick layer of slime on it you can scrape off with a knife.
2. Your ass feels like it’s been hit with a sledgehammer.
3. You have no clean socks left and you can’t find your shoes so you have to nude-foot it.
4. Hitting your friend in front of you in the head with a foreign object isn’t as fun as it was three days ago. [Yeah, it is.]
5. Saying the word ‘cholos’ seems like the funniest thing you ever heard.
6. Truck stops are the highlight of your day.
7. You haven’t seen a member of the opposite sex for so long that the cows on the side of the road are starting to arouse you.
8. A soda and a MIlky Way is dinner to you.
9. You have constant batwing.*
10. You keep seeing midgets on the side of the road waving you over to a bufffet with live nude girls.
[*Batwing: When your balls stick to the side of your leg, also popularly known as ‘truckers nut’.]

K-ROCK’S Dysfunctional Family Picnic II was hosted June 11 at Jones Beach and featured Blink 182, Live, Kid Rock, Rob Zombie, Rage Against the Machine, Lo Fidelity All Stars, Limp Biskit and the Stuttering John Band from the Howard Stern show. This was one of the better summer shows so far.

For one weekend out of the year, estrogen takes over testosterone.  Cara-Beth, Elissa, Heidi, Jodie, Jesse, Alexis, Perry, Jaime all ripped it up at the All Girl Skate Jam at Sid & Mary’s new and improved Skater Island. CB skated with fire doing frontside 360s over the channel on the vert.  The men slammin’ their boards with respect or it could have been a hormonal reaction.  Jodie McDonald, Jen O’Brien and Heidi were chargin’ it and feeding of each other’s energy.  Twelve-year-old Alexis, walked away with the AM contest doing frontside board slides down the hand rail and getting some air on 3 1/4 ollie to fakie and she’s only been skating for two years. Steamer cleared the box, doing backside shifties and five foot air kickflip backside grabs transferring over the flatbar. Yes, the girls can skate. Everyone left with a smile on their faces, knowing they had a good time. It wasn’t about competition or who you were.  It was all about the girls getting together and skateboarding and finally receiving the respect they deserve.

PIPELINE: GOSSIP, RUMORS AND INNUENDO
by Anya Hard and Finchley

MORPHINE frontman dies on stage. Mark Sandman, lead singer of the innovative rock band Morphine, died Saturday (7/3) of a heart attack at a concert outside Rome. He was 46. Sandman collapsed on stage in front of several thousand spectators at a music festival  just before midnight. He was not known to have a heart condition or any other major health problems. Sandman died on the second day of a three-day music festival at the Giardini del Principe in Palestrina, 30 miles east of Rome. Sandman, known for his deep, murky baritone, played bass and wrote all of Morphine’s songs. Morphine was a guitar-less trio that includes Dana Colley on saxophone and Billy Conway on drums. Sandman was a singer-guitarist in the alternative band Treat Her Right, which released several albums in the 1980s.

FUN LOVIN CRIMINALS: Fun Lovin’ Huey Gets Arrested For Smoking a Joint ! Huey from the Fun Lovin’ Criminals won’t have any problems getting into the UK this weekend for Glastonbury despite being banged up for a night in New York. He was apparently put under lock and key to ‘cool down’ after being picked up for smoking a joint on the street. A New York police officer says he smelt the joint while walking past the FLC frontman, who was talking to a group of friends in Manhattan.

PUFFY: Rap mogul Sean “Puffy” Combs has reportedly reached an out-of-court settlement with the record executive who accused the rapper/producer and two bodyguards of barging into his New York office April and beating him puffy with the weapons of the realm—a champagne bottle, a chair and a telephone.  The New York Daily News, citing “sources close to the negotiations,” reports that Combs will pay Steve Stoute “producer and management fees” amounting to $500,000—not a bad deal for Combs, 29, considering Stoute, a Universal Records executive known for his work with Nas and Mary J. Blige, was reputedly demanding as much as $12 million shortly after the alleged incident. Another “insider” told the paper that Stoute’s deal “could be much higher [than $500,000].” The Daily News says the deal has Combs engaging in a long-term business alliance with Stoute, rather than paying him some dough to never hear from him again. Combs’ Bad Boy Entertainment will purportedly pay Stoute fees for producing both albums and videos, and for managing some of its artists. The way the paper’s sources spin it, Puffy and Stoute might be even better friends for the incident that inflicted the music exec with a broken arm, broken jaw and cuts on his face and head.  “Puffy and Steve have made peace,” an unnamed source told the paper. The insider added that Combs and Stoute planned to sit together at Madison Square Garden Monday when the NBA Finals head back to New York.  As for official comments, Combs’ attorney, Jay Goldberg, is the only person who’s made one: “I am confident the matter will work itself out,” he said. Combs still faces criminal charges relating to the incident—allegedly triggered when Puffy blamed Stoute for a misguided cameo in a Nas music video. (Puffy was crucified in the “Hate Me Now” video, tried to have the scene removed and blamed Stoute when the video appeared unedited on MTV). However, the Daily News says the hip-hop star is trying to cut a deal with prosecutors to reduce the rap from a felony to a misdemeanor, with Stoute’s refusal to press charges helping Combs’ leverage.

ODB: Return To the Studio  VH1.com would like to remind our users that Ol’ Dirty Bastard occasionally makes music. The troubled rapper, who has been accused of shoplifting and even terrorism in his time, is currently deciding on what to call his new solo album, due for release in either August or September. The follow-up to Return to the 36 Chambers: The Dirty Version will be called either Nigga Please, God Made Dirt and the Dirt Don’t Hurt or Dirty’s World. ODB described the album: “It’s gonna be crazy … with respect to myself, with respect to African people.” We wouldn’t have it any other way.

DMX – We smell a rivalry brewing. Rapper DMX is  beginning to give Ol’ Dirty Bastard a run for his money in the arrests department. The hardcore rapper (real name Earl Simmons), along with his wife Tashera, were arrested on weapons charges in Teaneck, N.J. on Wednesday (June 30).  According to Detective Sergeant Michael Falvey of the Teaneck Police Department, DMX was wanted in conjunction with the Fort Lee, N.J. shooting of Ray Copeland, the rapper’s uncle and manager, on Saturday (June 26). Copeland was shot in the foot. Fort Lee police were granted a search warrant for DMX’s home in Teaneck, where they recovered an Intratec 9 auto pistol, hollow-nosed bullets, a high-capacity magazine for the pistol, a bullet-proof vest, some drug paraphernalia, and 14 pit bulls (13 of which were caged in the basement). DMX was not at home at the time of the search and later turned himself in after receiving news of a warrant for his arrest. The rapper and his wife were charged with possession of hollow-nosed bullets, possession of drug paraphernalia (possibly glass vials and smoking pipes), possession of an Intratec 9 pistol, and possession of a high-capacity magazine. There was also a supplemental charge of possession of a weapon for an unlawful purpose. DMX’s wife was hit with all the same charges.  The rapper was freed on $50,000 bail while his wife was released on $2500. At press time, a return court date had not been set.

June 14, 1999  The boys from Biohazard were out in full force for their record release party at NYC’s Irving Plaza.  Old-school and new-school fans were warmly welcomed as the band preceded to do what they have come to be known for, putting on a heavy and great live show.  (No alt-rock shoe-gazers allowed!) They kicked it off with “Resist,” the lead track from their latest album, New World Disorder, and then ripped through a great set list.  Along the way, they hit all old the favorites like, “Shades of Grey,” “What Makes Us Tick,” a brutal version of “Punishment,” and the soon to be new ‘Hazard classics like “Switchback,” and “Breakdown.”  The packed crowd responded in all the appropriate ways and bodies were flying all over the place.  The band loved it and the harder they played, the more intense the reaction. At a few points during the evening guitarist Billy Graziadei decided that he too wanted to a part of the (re)action, jumping off the stage, into the crowd, guitar in still in hand!  Bassist/vocalist Evan Seinfeld also did his usual politicking against the critics who have slagged and misunderstood the band as well as their lyrics.  He urged all in attendance to go back, read their lyrics, and see that they are not a band that preaches violence and hate, but exactly the opposite.  Then in usual Biohazard fashion they capped the night with their anthem “Hold My Own.”