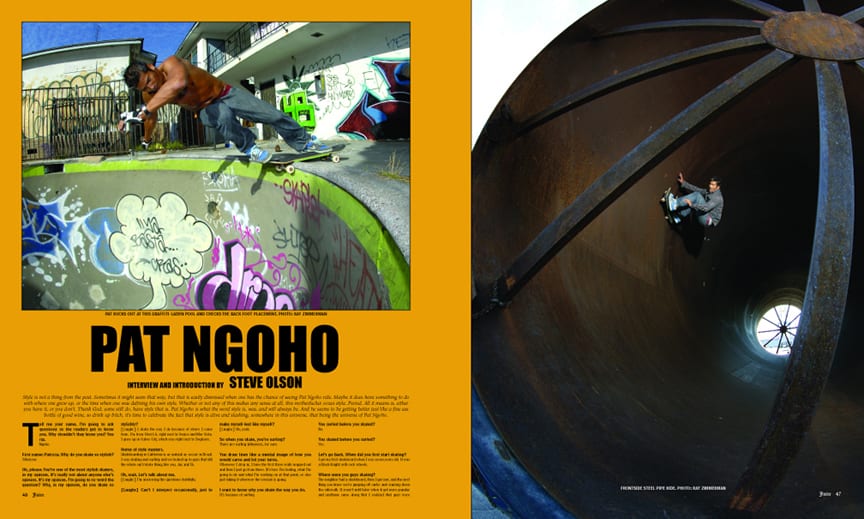 Style is not a thing from the past. Sometimes it might seem that way, but that is easily dismissed when one has the chance of seeing Pat Ngoho ride. Maybe it does have something to do with where one grew up, or the time when one was defining his own style. Whether or not any of this makes any sense at all, this cat oozes style. Period. All it means is, either you have it, or you don’t. Thank God, some still do, have style that is. Pat Ngoho is what the word style is, was, and will always be. And he seems to be getting better just like a fine ass bottle of good wine, so drink up bitch, it’s time to celebrate the fact that style is alive and slashing, somewhere in this universe, that being the universe of Pat Ngoho.

“AS A KID, I RELATED MORE TO THE BOWL RIDING THING AND THE UNDERGROUND POOL SKATING SCENE. GUYS WERE GOING OUT AND DOING IT DIY AND FINDING BOWLS, BANKS AND POOLS. THEY WERE RENEGADES. THAT PART OF SKATEBOARDING HAS ALWAYS INTERESTED ME. THAT IS THE HEART AND SOUL OF SKATEBOARDING.”

Tell me your name. I’m going to ask questions so the readers get to know you. Why shouldn’t they know you? You rip.
Ngoho.

First name: Patricia. Why do you skate so stylish?
Whatever.

Home of style masters.
Skateboarding in California is as natural as soccer in Brazil. I was skating and surfing and we looked up to guys that did the whole surf/skate thing, like you, Jay and TA.

[Laughs] Can’t I interject occasionally, just to make myself feel like myself?
[Laughs] Oh, yeah.

So when you skate, you’re surfing?
There are surfing influences, for sure.

You draw lines like a mental image of how you would carve and hit your turns.
Whenever I drop in, I have the first three walls mapped out and then I just go from there. It’s how I’m feeling, what I’m going to do and what I’m working on at that point, or else just taking it wherever the session is going.

I want to know why you skate the way you do.
It’s because of surfing.

You surfed before you skated?
No.

You skated before you surfed?
Yes.

Let’s go back. When did you first start skating?
I got my first skateboard when I was seven years old. It was a Black Knight with rock wheels.

Where were you guys skating?
The neighbor had a skateboard, then I got one, and the next thing you know we’re jumping off curbs and cruising down the sidewalk. It wasn’t until later when it got more popular and urethane came along that I realized that guys were pushing it to a whole different level. Everything hit hard. That’s when I first started seeing magazines. There were rumors of guys riding in bowls. We were seeing pictures in the magazines of guys riding at Kenter and Paul Revere. I went to Westchester High, which was a surfer school. Those surfers had really cool skateboards they’d made in wood shop.

I made a kneeboard. I had a 12-inch board with round disc sandpaper polka dots. The wood was like an old piece of plank with a weird, natural groove. I could fit my knees in there and skate it like a pig.
It was a great era, kids would just make their own boards. Longboards were on.

Waterskis were rockin’ for the cruiser ’70s stoner surfer guy.
I remember people taking Makaha waterskis and turning them into skateboards. You’d show up at a ditch and see these different quivers. It was a movement.

Did you feel like you had some kind of talent?
I’m not sure. We just enjoyed it. There was a small group of us skateboarding at an early age. We were hunting down pools in 1975: the airport pools.

What wheels were you riding?
Cadillac Wheels.

I’m not going to let you know until the end of the interview.
[Laughs] We were finding pools and looking at magazines.

What was the cover of the first Skateboarder when it came out?
Uh, Gregg Weaver?

How insane was that?
That was our world. We were hunting this stuff down. It was great because Skateboarder was running shots of Kenter and all these drainage ditches and pools. We were like, ‘That’s in our neighborhood. We can go find these places.’ We’d get our parents or neighbors to drive us, because we were all too young to drive, and find these pools. One day, we were skating this egg and the owner said, ‘If you’re not hitting the tile, you’re hitting the gate.’ Moses Padilla and the boys were showing up and they were getting ready to have a jam. I couldn’t hit tile at that point, but I went for it. I carved, got over the light and then hit the tile. That was my big moment. I got to stay for the session.

Then the urethane wheel came out.
I had Cadillac wheels and then I got Road Riders. I went to school in Westchester where LAX is. At that time, there were these huge housing tracts. They kicked people out of their homes to clear the way for the airport and there was a windfall of swimming pools. That was my introduction to pool riding.

What about skateparks?
Skateparks came later. Montebello opened up and it had snake runs and mellow bowls. My mom took me out there. We just hit parks. My mom was a single mom and she was working nights. When I got home from school, my buddies and I would take the bus from Culver City to Lakewood to skate. It was three or four hours each way, through some pretty heavy areas.

I rode the bus from my house to the Fruit Bowl, but that’s nothing compared to Lakewood from Culver City. I never rode Montebello. How was that?
It was great. I pulled up and there was Paul Cullen, ripping. I was like, ‘Whoa. That’s what skateboarding is all about.’ I knew this was what I wanted to be doing. Then there were the Z Boys. Those guys were onto something. In between, I went to the California Free Former contests. I saw Tony Alva and Dennis Martinez do their thing. I saw the slalom racers. I saw Bobby Piercy.

You saw TA ride the vert wall in a motorcycle helmet, and win the barrel jump.
I saw the barrel jump. They should bring that back. That was Mega Ramp of that era. Before that it was just freestyle.

Riding pools and pipes was pretty gnarly, too.
Yeah, nothing touches it.

If you look at a photo of Waldo Autry at Baldy, or Biniak or Mike Weed frontside at Baldy, it looks gnarlier than a dude doing a headstand spinner.
There was no comparison.

The barrel jump was more like the long jump in the Decathalon. You’re not at Long Beach starting at the top of a ski ramp. It was more track and field than the mega ramp. But it was one of the sickest things I’ve ever seen in skateboarding. The bad boy Alva comes to the grand finale and sticks the barrel jump, then destroys everyone on the quarter pipe vert wall.
TA was impressive. I remember the crowd freaking out. That ramp was gnarly. It would be gnarly today. It had five feet of tranny and ten feet of vert and he was at the top.

[Laughs] With his name diecut into his griptape.
TA knew where he wanted to go.

Marketing. Creating something that was already created before. You saw the Freeformer contests. Did you like the way that they were more like professional skateboarders with the spotlights?
It was like the X Games. You saw it, but you didn’t really relate to it. As a kid, I related more to the bowl riding thing and the underground pool skating scene. Guys were going out and doing it DIY and finding bowls, banks and pools. They were renegades. That part of skateboarding has always intrigued me. That is the heart and soul of skateboarding.