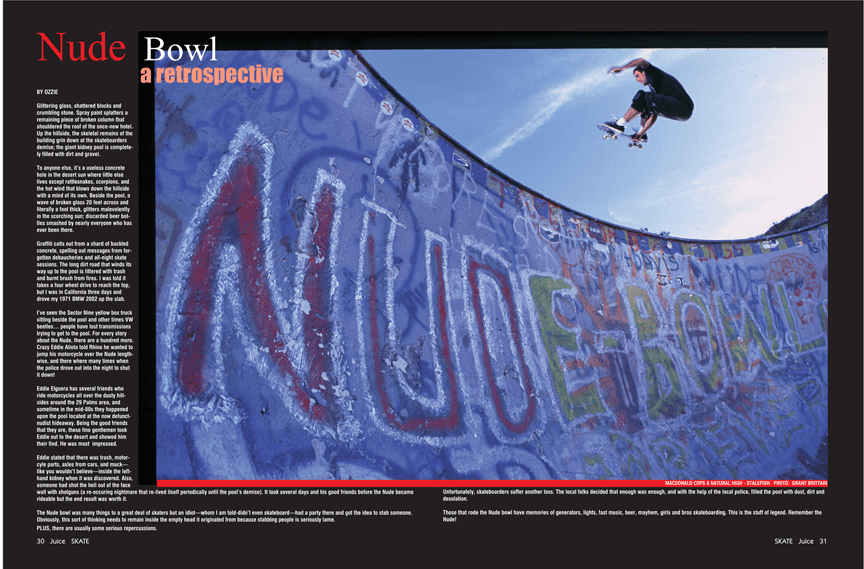 Nude Bowl: a retrospective
Words by Ozzie
Photos by Rhino

Glittering glass, shattered blocks and crumbling stone. Spray paint splatters a remaining piece of broken column that shouldered the roof of the once-new hotel. Up the hillside, the skeletal remains of the building grin down at the skateboarders demise; the giant kidney pool is completely filled with dirt and gravel.

To anyone else, it’s a useless concrete hole in the desert sun where little else lives except rattlesnakes, scorpions, and the hot wind that blows down the hillside with a mind of its own. Beside the pool, a wave of broken glass 20 feet across and literally a foot thick, glitters malevolently in the scorching sun; discarded beer bottles smashed by nearly everyone who has ever been there.

Graffiti calls out from a shard of buckled concrete, spelling out messages from forgotten debaucheries and all-night skate sessions. The long dirt road that winds its way up to the pool is littered with trash and burnt brush from fires. I was told it takes a four wheel drive to reach the top, but I was in California three days and drove my 1971 BMW 2002 up the slab.

I’ve seen the Sector Nine yellow box truck sitting beside the pool and other times VW beetles… people have lost transmissions trying to get to the pool. For every story about the Nude, there are a hundred more. Crazy Eddie Aliota told Rhino he wanted to jump his motorcycle over the Nude lengthwise, and there where many times when the police drove out into the night to shut it down!

Eddie Elguera has several friends who ride motorcycles all over the dusty hillsides around the 29 Palms area, and sometime in the mid-80s they happened upon the pool located at the now defunct-nudist hideaway. Being the good friends that they are, these fine gentlemen took Eddie out to the desert and showed him their find. He was most impressed.

Eddie stated that there was trash, motorcycle parts, axles from cars, and muck—like you wouldn’t believe—inside the left-hand kidney when it was discovered. Also, someone had shot the hell out of the face wall with shotguns (a re-occurring nightmare that re-lived itself periodically until the pool’s demise). It took several days and his good friends before the Nude became rideable but the end result was worth it.

The Nude bowl was many things to a great deal of skaters but an idiot—whom I am told-didn’t even skateboard—had a party there and got the idea to stab someone. Obviously, this sort of thinking needs to remain inside the empty head it originated from because stabbing people is seriously lame.

PLUS, there are usually some serious repercussions.

Unfortunately, skateboarders suffer another loss. The local folks decided that enough was enough, and with the help of the local police, filled the pool with dust, dirt and desolation.

Those that rode the Nude bowl have memories of generators, lights, fast music, beer, mayhem, girls and bros skateboarding. This is the stuff of legend. Remember the Nude!

Those who rode it rode it well, those who didn’t can go to hell. PHoto: RHino