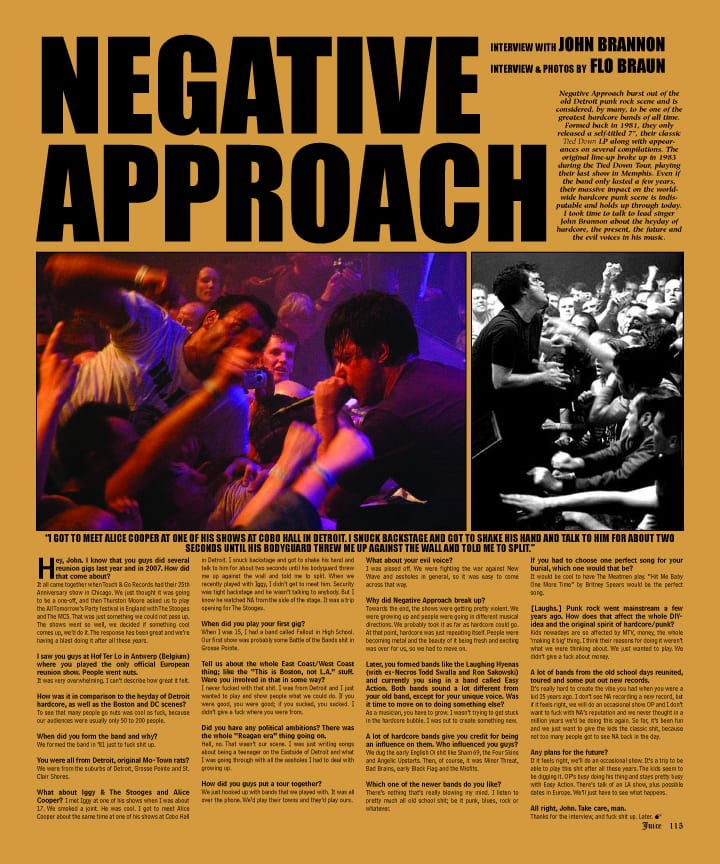 Negative Approach burst out of the old Detroit punk rock scene and is considered, by many, to be one of the greatest hardcore bands of all time. Formed back in 1981, they only released a self-titled 7′, their classic Tied Down LP along with appearances on several compilations. The original line-up broke up in 1983 during the Tied Down Tour, playing their last show in Memphis. Even if the band only lasted a few years, their massive impact on the worldwide hardcore punk scene is indisputable and holds up through today. I took time to talk to lead singer John Brannon about the heyday of hardcore, the present, the future and the evil voices in his music.

“I GOT TO MEET ALICE COOPER AT ONE OF HIS SHOWS AT COBO HALL IN DETROIT. I SNEAKED BACKSTAGE AND GOT TO SHAKE HIS HAND AND TALK TO HIM FOR ABOUT TWO SECONDS UNTIL HIS BODYGUARD THREW ME UP AGAINST THE WALL AND TOLD ME TO SPLIT.”

Hey, John. I know that you guys did several reunion gigs last year and in 2007. How did that come about?
It all came together when Touch and Go Records had their 25th Anniversary show in Chicago. We just thought it was going to be a one-off, and then Thurston Moore asked us to play the All Tomorrow’s Party festival in England with The Stooges and The MC5. That was just something we could not pass up. The shows went so well, we decided if something cool comes up, we’d do it. The response has been great and we’re having a blast doing it after all these years.

I saw you guys at Hof Ter Lo in Antwerp (Belgium) where you played the only official European reunion show. People went nuts.
It was very overwhelming. I can’t describe how great it felt.

How was it in comparison to the heyday of Detroit hardcore, as well as the Boston and DC scenes?
To see that many people go nuts was cool as fuck, because our audiences were usually only 50 to 200 people.

When did you form the band and why?
We formed the band in ’81 just to fuck shit up.

You were all from Detroit, original Mo-Town rats?
We were from the suburbs of Detroit, Grosse Pointe and St. Clair Shores.

What about Iggy and The Stooges and Alice Cooper?
I met Iggy at one of his shows when I was about 17. We smoked a joint. He was cool. I got to meet Alice Cooper about the same time at one of his shows at Cobo Hall in Detroit. I snuck backstage and got to shake his hand and talk to him for about two seconds until his bodyguard threw me up against the wall and told me to split. When we recently played with Iggy, I didn’t get to meet him. Security was tight backstage and he wasn’t talking to anybody. But I know he watched NA from the side of the stage. It was a trip opening for The Stooges.

When did you play your first gig?
When I was 15, I had a band called Fallout in High School. Our first show was probably some Battle of the Bands shit in Grosse Pointe.

Tell us about the whole East Coast/West Coast thing; like the ‘This is Boston, not L.A.’ stuff. Were you involved in that in some way?
I never fucked with that shit. I was from Detroit and I just wanted to play and show people what we could do. If you were good, you were good; if you sucked, you sucked. I didn’t give a fuck where you were from.

Did you have any political ambitions? There was the whole ‘Reagan era’ thing going on.
Hell, no. That wasn’t our scene. I was just writing songs about being a teenager on the Eastside of Detroit and what I was going through with all the assholes I had to deal with growing up.

How did you guys put a tour together?
We just hooked up with bands that we played with. It was all over the phone. We’d play their towns and they’d play ours.

What about your evil voice?
I was pissed off. We were fighting the war against New Wave and assholes in general, so it was easy to come across that way.

Why did Negative Approach break up?
Towards the end, the shows were getting pretty violent. We were growing up and people were going in different musical directions. We probably took it as far as hardcore could go. At that point, hardcore was just repeating itself. People were becoming metal and the beauty of it being fresh and exciting
was over for us, so we had to move on.

Later, you formed bands like the Laughing Hyenas (with ex-Necros Todd Swalla and Ron Sakowski) and currently you sing in a band called Easy Action. Both bands sound a lot different from your old band, except for your unique voice. Was it time to move on to doing something else?
As a musician, you have to grow. I wasn’t trying to get stuck in the hardcore bubble. I was out to create something new.

A lot of hardcore bands give you credit for being an influence on them. Who influenced you guys?
We dug the early English Oi shit like Sham 69, the Four Skins and Angelic Upstarts. Then, of course, it was Minor Threat, Bad Brains, early Black Flag and the Misfits.