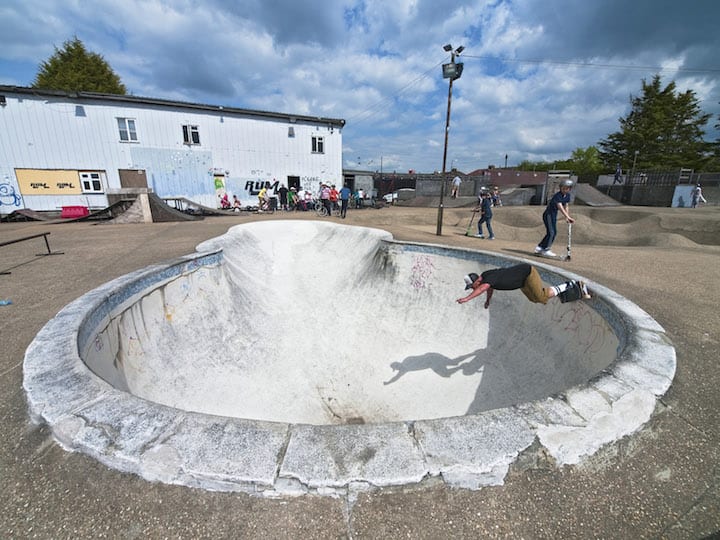 In August 1978, a brand new state-of-the-art skatepark arose in London, complete with a clover bowl, pool, snake run, slalom run, concrete half-pipe and a performance bowl based on the “Vertibowl” at Paramount Skatepark in California. Thirty-six years later, the Rom has become the first skatepark in Europe to be given “protected heritage status,” joining the first designated historical landmark skatepark, the Bro Bowl in Tampa, Florida, which was added to the USA’s National Register of Historic Places in October 2013.

This rare and honorable recognition was due to the efforts of Simon Inglis’ as he researched for his new book, Played in London, which focuses on the most iconic and creative locations for sport in the capital city of England. Inglis explained, “We honed in on ‘the Rom’ because, of the six or seven survivors from the 1970s, it retains more of its original features than any other and is still essentially complete. We were also impressed by the skatepark at Harrow, and many skateboarders will be familiar with the old skateparks at Kennington and Stockwell, plus of course the famous concourse at the South Bank.” 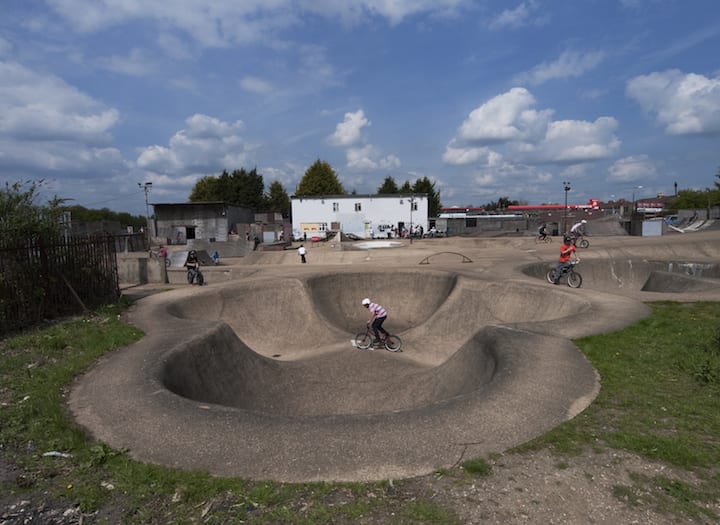 Inglis invested ten years of research into the book and noted, “In London alone, where there are at least 75 skateparks currently in use, skateboarding is still as cool as ever.”

Inglis did a smash-up job and inspired the powers that be to crown the legendary skatepark with this great honor. He added, “I think it is wonderful that not only has English Heritage supported the research and publication of Played in London, but that it is also taking practical steps to protect this amazing piece of late 20th century heritage. I really hope that ‘the Rom’ will now become a place of pilgrimage for young skateboarders wanting to learn more about the sport’s early days, and have a brilliant time while doing so.”

Played in London intricately explores the sites inherent to the explosion and growth of skateboarding in England and hopes to bring recognition and preservation of these spots for the future, as he commented, “Skateboarding has now been part of the nation’s recreational life for over 35 years, since it arrived in Britain from California at the height of the 1970s. Some of the pioneers are now grandparents, passing on their skills and enthusiasm to the next generation.” 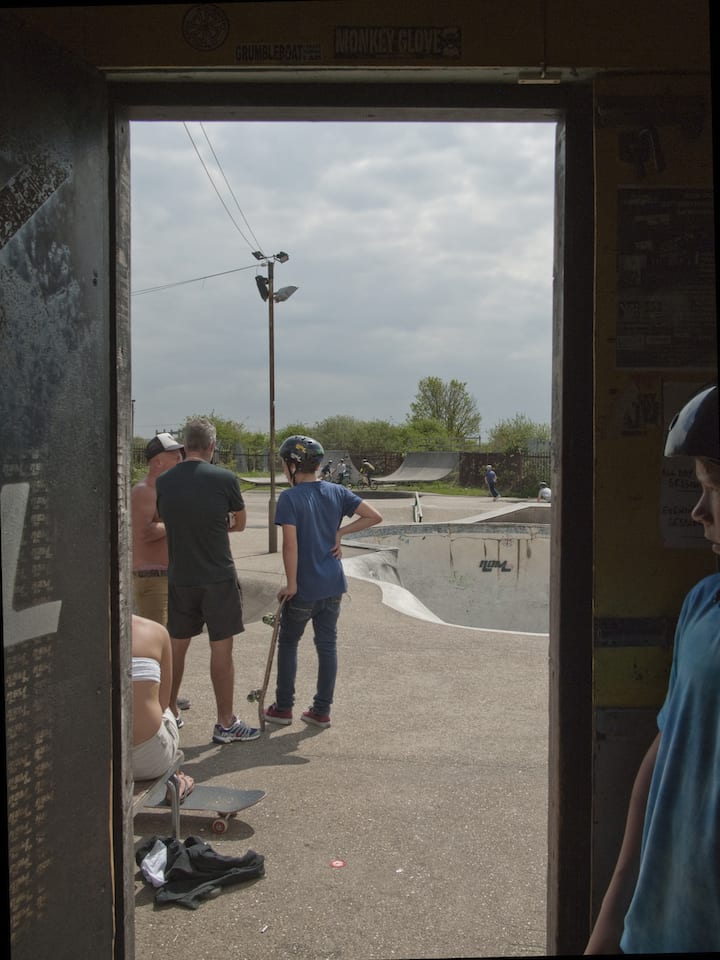 Skaters at the Rom Skatepark Clubhouse. An icon of the 1970s British Skateboard scene, the Rom Skatepark in Hornchurch, listed at Grade II. Decision based on research for new publication ‘Played in London’ by Simon Inglis (English Heritage £25.00). Copyrightwww.playedinbritain.com

One of the most elaborate and complete examples of a purpose-built skatepark has been listed by the Department for Culture, Media and Sport on the advice of English Heritage. Built in Hornchurch in 1978 by Adrian Rolt and G-Force, the leading skatepark designers of the period, ‘the Rom’ is the best example of a small number of skateparks that still survive from the early heyday of the skateboarding boom in the UK.

This is the first time a skatepark has been listed anywhere in Europe, and the second skatepark to be listed in the world, the first being “Bro Bowl” in Tampa, Florida.

Heritage Minister, Ed Vaizey, said: “The Rom was built in the late seventies for the very first skateboarders and is as popular now as it was then. Its listing at Grade II is testament to its design and also highlights how the UK’s unique heritage reflects all parts of our culture and history. I hope the protection provided by this listing ensures the pool, moguls and snake run can be enjoyed for years to come.”

Roger Bowdler, Designation Director at English Heritage, said: “Skateboarding is more than a sport: it has become a world-wide cult. The Rom is the finest example in England to this aspect of youth culture, and we are delighted its special interest will be protected for future generations through listing. It gives the whole idea of heritage an extra twist.”

The Rom is the product of a skateboarding craze that swept Britain in the 1970s. As skateboarding fever gripped the nation a rash of skateparks were built, but later demolished as popularity declined. The Rom is a rare survivor of this period and has been one of the most influential sites in British skateboarding culture ever since.

The Rom is made up of seamless shotcrete (pressurized concrete) closely based on Californian skateparks. These in turn were based on the various urban spaces colonized by pioneer skaters, including the oval and kidney-shaped swimming pools of the Los Angeles elite and the vast concrete spillways and drainage features of the Californian coast.

The Rom takes up 86,111 square feet, in a corridor of green land, next to the River Rom from which the skatepark takes its name. The central 43,100 square feet is surfaced in shotcrete, with a series of bowls and hollows of various shapes let into its surface.

The research into the skatepark formed part of a wider research project on London’s sporting heritage, culminating in the publication by English Heritage of “Played in London”. Written by Simon Inglis as part of the Played in Britain series, the book charts the spaces, buildings, and sports that have shaped London’s cultural and urban landscape for over two millennia. Beautifully illustrated with original photographs and detailed maps, and based on more than ten years of in-depth research, “Played in London” explores the legacy of sport in the world’s most iconic city. This is the most ambitious offering yet from Simon Inglis, the UK’s leading sporting heritage expert, who for the first time masterfully investigates the history and continuing heritage of sport across the whole of London. 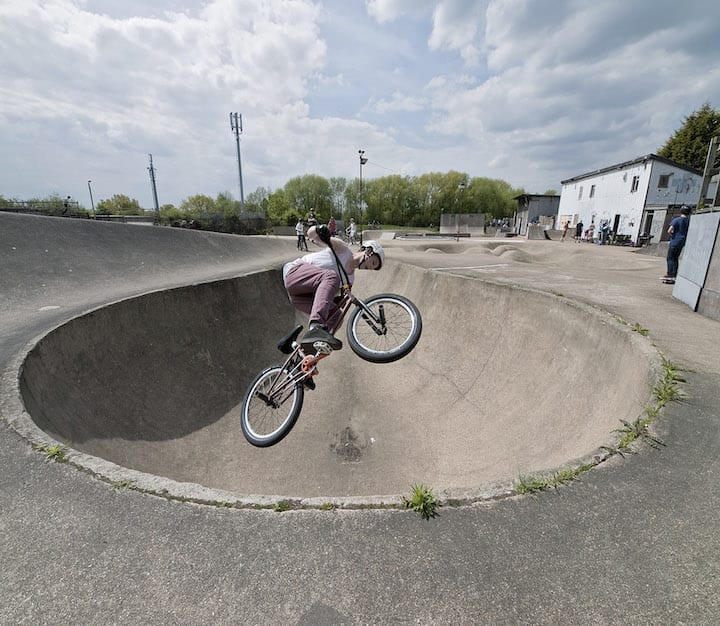 The Bowl at Rom Skatepark Bowl. An icon of the 1970s British Skateboard scene, the Rom Skatepark in Hornchurch, listed at Grade II. Decision based on research for new publication ‘Played in London’ by Simon Inglis (English Heritage £25.00). Copyrightwww.playedinbritain.com

The seven main features of The Rom:

THE POOL: a twin-lobed bowl, approximately 6.7m in diameter and 2.75m deep, with a 2m ramp at one end and a metal rim. This is a standard design, based on the keyhole pool at Skateboard Heaven in Spring Valley, California and the San Diego ‘Soul Bowl’. The resemblance to a swimming pool is emphasised by the smooth lining material (‘marbleite’ resin, according to a contemporary article) applied over the shotcrete surface, as well as the raised flagstone-like surround (known as ‘coping’ in skateboard parlance) and the layers of blue mosaic tiles beneath the rim.

THE MOGULS: six interlinked bowls of varying depth and diameter, arranged in a triangular formation with a high concrete ‘shoulder’ separating each from each.

THE PERFORMANCE BOWL: a single large bowl, 9m in diameter and up to 4m deep, with a long wedge-shaped entry ramp. Like its Californian prototype, the ‘Vertibowl’ at Paramount Skatepark, it was once enclosed by a curving vertical wall that served to increase its depth; this was taken down within a year of opening.

THE SLALOM RUN and FREESTYLE AREA: a long ramp that forms the site’s main east-west axis; its eastern end is raised up, while to the west it descends into a large shallow rectangular bowl used for freestyle manoeuvres.

THE SNAKE RUN: a serpentine formation, shallow at one end and gradually deepening towards the other.

THE FOUR-LEAF CLOVER: four small bowls of unequal depth, arranged in a clover-leaf formation, each separated by a shallow concrete lip.

THE HALF-PIPE: a long, deep capsule-shaped bowl with vertical walls (partially lowered and shortened since construction) along the straight sides. 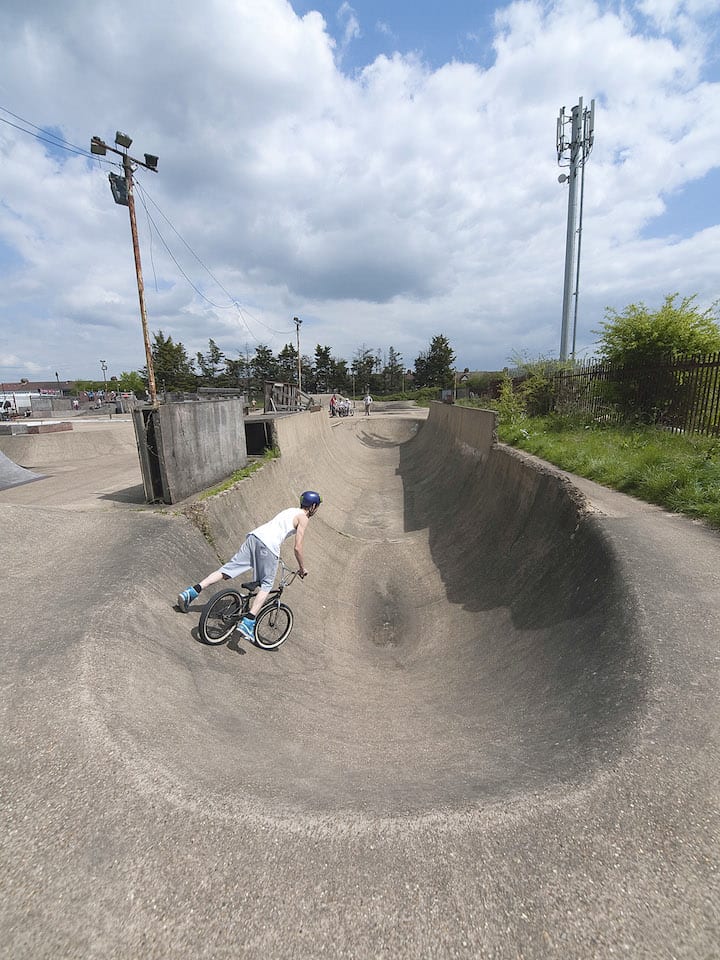 The Half Pipe at Rom Skatepark. An icon of the 1970s British Skateboard scene, the Rom Skatepark in Hornchurch, listed at Grade II. Decision based on research for new publication ‘Played in London’ by Simon Inglis (English Heritage £25.00). Copyrightwww.playedinbritain.com

For more information and to buy the book, please go to http://www.playedinbritain.co.uk/

PrevPreviousHill Street Documentary about the Rise of Skateboarding Culture in Dublin, Ireland
NextShootout at Woodward West Skate Video Contest for the Ride ChannelNext