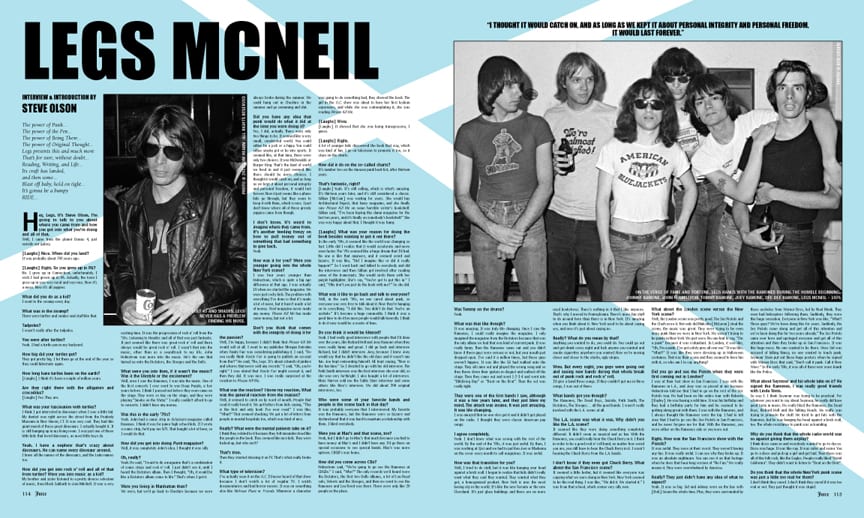 The power of Punk… The power of the Pen… The power of Being There… The power of Original Thought… Legs presents this and much more. That’s for sure, without doubt… Reading, Writing, and Life… Its craft has landed, and then some… Blast off baby, hold on tight… It’s gonna be a bumpy RIDE…

“It was basically the reverse of the Devil Wears Prada. The girl goes into CBGBs in a mink coat and at the end of the movie she comes out in a black leather jacket.”

Hey, Legs. It’s Steve Olson. I’m going to talk to you about where you came from and how you got into what you’re doing and all of that.
Well, I came from the planet Darius 4, just outside our galaxy.

[Laughs] Nice. When did you land?
It was probably about 700 years ago.

[Laughs] Right. So you grew up in PA?
No. I grew up in Connecticut, unfortunately. I wish I had grown up in PA. Actually, the town I grew up in was very rural and very nice. Now it’s a mess. Now it’s all yuppies.

What did you do as a kid?
I went to the swamp every day.

What was in the swamp?
There were turtles and snakes and stuff like that.

Tadpoles?
I wasn’t really after the tadpoles.

You were after turtles?
Yeah. I had a turtle pen in my backyard.

How big did your turtles get?
They got pretty big. I let them go at the end of the year so they could hibernate again.

How long have turtles been on the earth?
[Laughs] I think it’s been a couple of million years.

Are they right there with the alligators and crocodiles?
[Laughs] Yes. They are.

What was your fascination with turtles?
I think I got interested in dinosaurs when I was a little kid. My dentist was right across the street from the Peabody Museum in New Haven, CT. It was very cool. They had this giant mural of these great dinosaurs. I actually bought it. It is still hanging up in my living room. I was just one of those little kids that loved dinosaurs, as most little boys do.

Yeah. I have a nephew that’s crazy about dinosaurs. He can name every dinosaur around.
I knew all the names of the dinosaurs, and the Latin names too.

How did you get into rock n’ roll and all of that from turtles? Were you into music as a kid?
My brother and sister listened to a pretty diverse selection of music, from Black Sabbath to Joni Mitchell. It was a very exciting time. It was the progression of rock n’ roll from the ‘50s. Listening to Hendrix and all of that was just fantastic. It just seemed like there was great rock n’ roll and there always would be great rock n’ roll. I wasn’t that into the music, other than as a soundtrack to my life. John Holmstrom was more into the music. He’s the one that turned us onto the Dictators, the Stooges and the Dolls.

What were you into then, if it wasn’t the music? Was it the lifestyle or the excitement?
Well, once I saw the Ramones, I was into the music. One of the first concerts I ever went to was Deep Purple, a few years before. I think I passed out before they even came on the stage. They were so tiny on the stage, and they were playing “Smoke on the Water.” I really couldn’t afford to go to concerts. I didn’t have any money.

Was this in the early ‘70s?
Yeah. John had a comic strip in Scholastic magazine called Bananas. I think it was for junior high school kids. If I wrote a comic strip, he’d pay me $75. That bought a lot of beer, so I would do that.

How did you get into doing Punk magazine?
Well, it was completely John’s idea. I thought it was silly.

Oh, really?
Yeah. He said, “I want to do a magazine that’s a combination of comic strips and rock n’ roll. I just didn’t see it, until I heard the Dictators album. Then I thought, “Oh, it would be like a Dictators album come to life.” That’s when I got it.