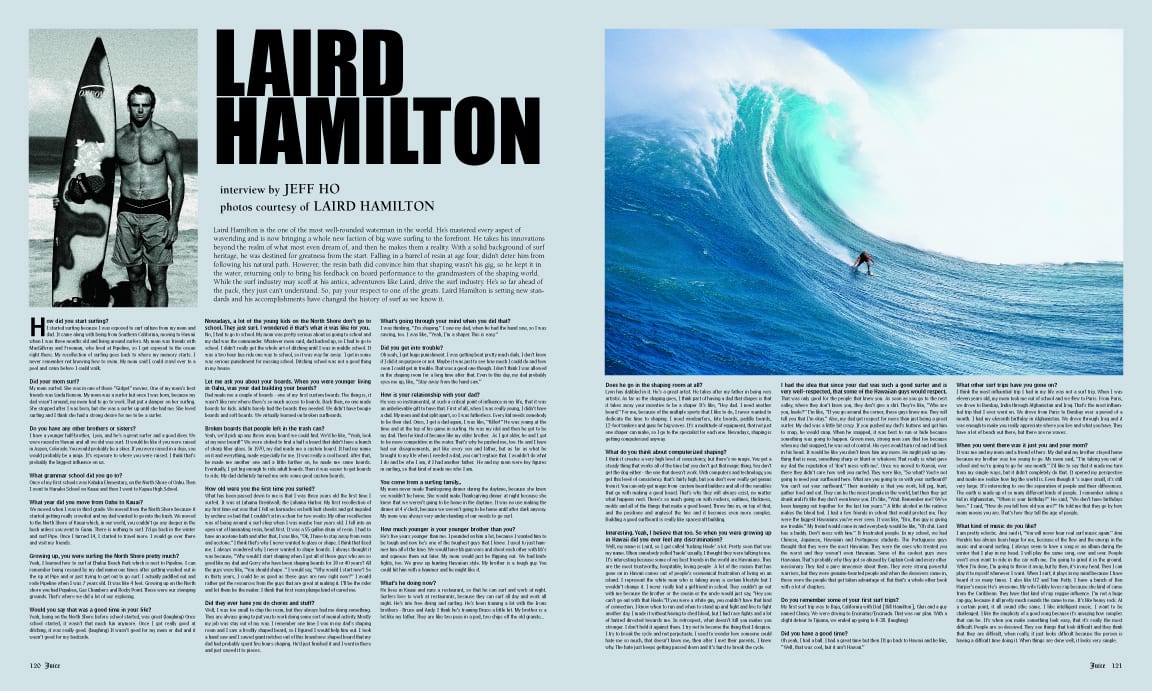 INTERVIEW AND INTRODUCTION BY JEFF HO

Laird Hamilton is the one of the most well-rounded waterman in the world. He’s mastered every aspect of waveriding and is now bringing a whole new faction of big wave surfing to the forefront. He takes his innovations beyond the realm of what most even dream of, and then he makes them a reality. With a solid background of surf heritage, he was destined for greatness from the start. Falling in a barrel of resin at age four, didn’t deter him from following his natural path. However, the resin bath did convince him that shaping wasn’t his gig, so he kept it in the water, returning only to bring his feedback on board performance to the grandmasters of the shaping world. While the surf industry may scoff at his antics, adventurers like Laird, drive the surf industry. He’s so far ahead of the pack, they just can’t understand. So, pay your respect to one of the greats. Laird Hamilton is setting new standards and his accomplishments have changed the history of surf as we know it.

How did you start surfing?
I started surfing because I was exposed to surf culture from my mom and dad. It came along with being from Southern California, moving to Hawaii when I was three months old and living around surfers. My mom was friends with MacGillivray and Freeman, who lived at Pipeline, so I got exposed to the ocean right there. My recollection of surfing goes back to where my memory starts. I never remember not knowing how to swim. My mom said I could crawl over to a pool and swim before I could walk.

“I started surfing because I was exposed to surf culture from my mom and dad. It came along with being from Southern California, moving to Hawaii when I was three months old and living around surfers.”

Did your mom surf?
My mom surfed. She was in one of those ‘Gidget’ movies. One of my mom’s best friends was Linda Benson. My mom was a surfer but once I was born, because my dad wasn’t around, my mom had to go to work. That put a damper on her surfing. She stopped after I was born, but she was a surfer up until she had me. She loved surfing and I think she had a strong desire for me to be a surfer.

What grammar school did you go to?
Once of my first schools was Kahuku Elementary, on the North Shore of Oahu. Then I went to Hanalei School on Kauai and then I went to Kapaa High School.

What year did you move from Oahu to Kauai?
We moved when I was in third grade. We moved from the North Shore because it started getting really crowded and my dad wanted to go into the bush. We moved to the North Shore of Kauai which, in our world, you couldn’t go any deeper in the bush unless you went to Guam. There is nothing to surf. I’d go back in the winter and surf Pipe. Once I turned 14, I started to travel more. I would go over there and visit my friends.

Growing up, you were surfing the North Shore pretty much?
Yeah, I learned how to surf at Ehukai Beach Park which is next to Pipeline. I can remember being rescued by my dad numerous times after getting washed out in the rip at Pipe and or just trying to get out to go surf. I actually paddled out and rode Pipeline when I was 7 years old. It was like 4 feet. Growing up on the North shore you had Pupukea, Gas Chambers and Rocky Point. Those were our stomping grounds. That’s where we did a lot of our exploring.

Nowadays, a lot of the young kids on the North Shore don’t go to school. They just surf. I wondered if that’s what it was like for you.
No, I had to go to school. My mom was pretty serious about us going to school and my dad was the commander. Whatever mom said, dad backed up, so I had to go to school. I didn’t really get the whole art of ditching until I was in middle school. It was a two hour bus ride one way to school, so it was way far away. I got in some way serious punishment for missing school. Ditching school was not a good thing in my house.

Let me ask you about your boards. When you were younger living in Oahu, was your dad building your boards?
Dad made me a couple of boards – one of my first custom boards. The thing is, it wasn’t like now where there’s so much access to boards. Back then, no one made boards for kids. Adults barely had the boards they needed. We didn’t have boogie boards and soft boards. We virtually learned on broken surfboards.

Broken boards that people left in the trash can?
Yeah, we’d pick up any throw away board we could find. We’d be like, ‘Yeah, look at my new board!’ We were stoked to find a half a board that didn’t have a bunch of sharp fiber glass. In 1970, my dad made me a custom board. It had my name on it and everything, made especially for me. It was really a cool board. After that, he made me another one and a little further on, he made me some boards. Eventually, I got big enough to ride adult boards. Then it was easier to get boards to ride. My dad definitely turned me onto some good custom boards.

How old were you the first time you surfed?
What has been passed down to me is that I was three years old the first time I surfed. It was at Lahaina Breakwall; the Lahaina Harbor. My first recollection of my first time out was that I fell on barnacles on both butt cheeks and got impaled by urchins so bad that I couldn’t sit in a chair for two weeks. My other recollection was of being around a surf shop when I was maybe four years old. I fell into an open vat of laminating resin, head first. It was a 55 gallon drum of resin. I had to have an acetone bath and after that, I was like, ‘Ok, I have to stay away from resin and acetone.’ I think that’s why I never wanted to glass or shape. I think that fixed me. I always wondered why I never wanted to shape boards. I always thought it was because, ‘Why would I start shaping when I got all of these guys who are so good like my dad and Gerry who have been shaping boards for 30 or 40 years? All the guys were like, ‘You should shape .’ I would say, ‘Why would I start now? So in thirty years, I could be as good as these guys are now right now?’ I would rather get the resources from the guys that are great at making it. I’ll be the rider and let them be the maker. I think that first resin plunge kind of cured me.

Did they ever have you do chores and stuff?
Well, I was too small to chip the resin, but they always had me doing something. They are always going to put you to work doing some sort of menial activity. Mostly my job was stay out of my way. I remember one time I was in my dad’s shaping room and I saw a freshly shaped board, so I figured I would help him out. I took a hand saw and I sawed giant notches out of this brand new shaped board that my dad had probably spent five hours shaping. He’d just finished it and I went in there and just sawed it to pieces.

What’s going through your mind when you did that?
I was thinking, ‘I’m shaping.’ I saw my dad, when he had the hand saw, so I was sawing, too. I was like, ‘Yeah, I’m a shaper. This is easy.’

Did you get into trouble?
Oh yeah, I got huge punishment. I was getting beat pretty much daily. I don’t know if I did it on purpose or not. Maybe it was just to see how much I could do and how soon I could get in trouble. That was a good one though. I don’t think I was allowed in the shaping room for a long time after that. Even to this day, my dad probably eyes me up, like, ‘Stay away from the hand saw.’

How is your relationship with your dad?
He was so instrumental, at such a critical point of influence in my life, that it was an unbelievable gift to have that. First of all, when I was really young, I didn’t have a dad. My mom and dad split apart, so I was fatherless. Every kid needs somebody to be their dad. Once, I got a dad again, I was like, ‘Killer!’ He was young at the time and at the top of his game in surfing. He was my idol and then he got to be my dad. Then he kind of became like my older brother. As I got older, he and I got to be more competitive in the water. That’s why he pushed me, too. He and I have had our disagreements, just like every son and father, but as far as what he brought to my life when I needed a dad, you can’t replace that. I wouldn’t do what I do and be who I am, if I had another father. He and my mom were key figures in surfing, so that kind of made me who I am.

You come from a surfing family.
My mom never made Thanksgiving dinner during the daytime, because she knew we wouldn’t be home. She would make Thanksgiving dinner at night because she knew that we weren’t going to be home in the daytime. It was no use making the dinner at 4 o’clock, because we weren’t going to be home until after dark anyway. My mom was always very understanding of our needs to go surf.