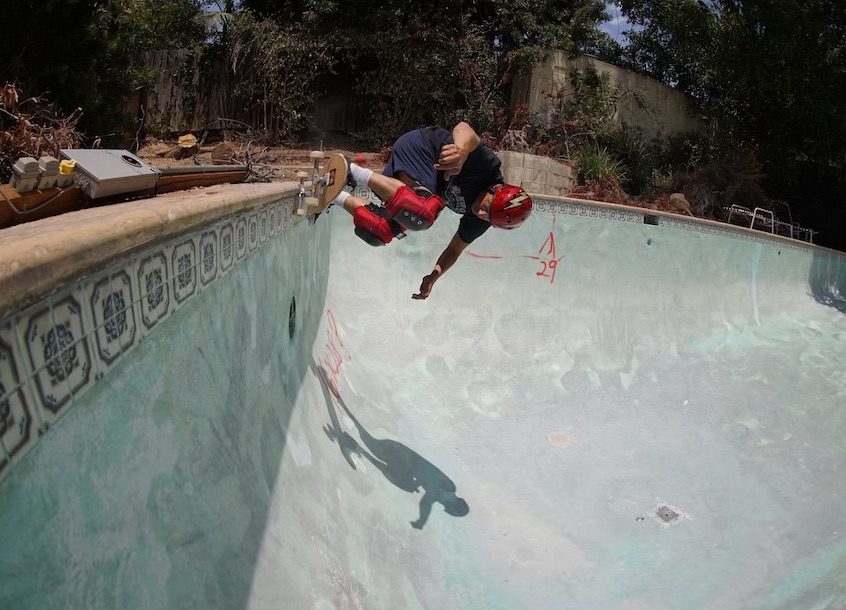 Skateboarding and punk rock lifer, Brian Brannon, of JFA, got the speed wobble blues and decided to write a song about one of skateboarding’s most infamous ways to hit the concrete. Skateboarding blues are in a category of their own, with underpinnings of bloody red asphalt and street pizza pain, served up at speeds that humans were most likely not meant to go. In Brannon’s acoustic amalgamation of “Speed Wobble Blues”, that spirit gives lyrical nods to some of skateboarding’s most nefarious and notorious luminaries. Bomb a hill, give a listen and stay tuned for more, as JFA celebrates 40 years this year, with new sounds for skateboarding being created as we speak.

JUICE: Why did you write this song “Speed Wobble Blues”?

BRANNON: I’ve done some crazy things skateboarding all over and I’ve done downhill skating for such a long time and I thought it would be good to write a song about it. Don Redondo said something that stuck with me and it’s at the beginning of the song. “Anyone who has done any skateboarding has a tale to tell about the time they shot the line down a hill, took a spill and fell…” Part of skating is falling. If you ain’t falling, you ain’t trying.

JUICE: What was your worst experience with speed wobbles?

BRANNON: Well, that one is in the song too. We were bombing this hill in Phoenix. There were about five or six of us and we all drove in my Fiat. I had this old Fiat back then, so there were three people in the front and three people in the back. I was bombing down this hill and I got the wobbles. I don’t know how fast I was going, but it was fast enough that I couldn’t run it out. That’s in the song too, “Too fast to run it out.” I ate it and slid on my side on the asphalt and the whole right side of my body was just one big scab. Then I had to drive everybody back with my open sores and scab rubbing up against other sweaty dudes on the way home. When I went to sleep that night, I was finally feeling better. When I woke up, my whole scab was stuck to the sheet and the whole side of my body just peeled off.

JUICE: That’s the worst. Why did you decide to do this song acoustic instead of electric?

BRANNON: Well, I’m not really a guitar player, but I got a guitar about ten years ago and I’ve just been playing at home. I was doing some Skate Rock acoustic shows at Grinderz by the Vans Huntington Beach Skatepark. When Grinderz first opened, there was a Taco Surf right next to the pro shop at Vans so, when all the skaters wanted a burger, they’d go over to Grinderz. It was a totally cool skater-owned burger shop and they’ve got beers and stuff in there. Then the Taco Surf lost their lease and they brought in another hamburger shop to the Vans Park, so then Vans was like, “We can’t do any promotions with Grinderz anymore.” I told Grinderz, “I love your stuff. What can I do to help? What if we have some gigs here?” They were like, “That would be killer, but we can’t have anything loud because there are people living on the second floor.” I was like, “What about acoustic?” So we started doing acoustic Skate Rock every month. We had all kinds of cool shows happening and this was one of my songs.

JUICE: Sick! What projects, besides this, are you currently working on and what can we be looking forward to from you in the future?

BRANNON: Well, we are working on a new JFA album. It’s been a while and that’s our big focus right now. We have about ten songs and we’ll probably do another ten songs and that will be about a 15-minute album. [laughs] It will probably be a little bit longer than that, but we like to play fast. This is actually our 40th anniversary year right now too. We wanted to do some shows, but COVID has everything so messed up that we’re just working on recording right now, so that should be good.

JUICE: That sounds amazing! Tell me about the other lyrics in the song “Speed Wobble Blues” and the quotes from other famous skateboarders that you put in there.

BRANNON: So I told you about Don’s quote which is, “Anyone who has done any skateboarding has a tale to tell…” Then there’s road rash “street pizza” when your road rash looks like cheese and pepperoni. [laughs] I forgot who told me about “street pizza”. I also talked about skating 45MPH, so that’s a nod to Duane Peters. I talk about Mockingbird Lane, which is the place, when I lived in Arizona, where we used to skate down that hill, with Chad Stewart and Scott Marzoni. I also quote Craig Stecyk because one of my favorite articles that he wrote back in the Dogtown days said, “The edge of the glide is all that’s surveyed.”

BRANNON: Yes. So I borrowed that bit and made it “to survey the edge of the glide.” Skateboarder used to have the Mellow Cat cartoons and they talked about Bongo who was the king of beefing, and I’d heard of head bongos, so I said, “It won’t be long before you find that Bongo is along for the ride.” Finally, I quote Tom Waits in there. I interviewed him for Thrasher, and it was a 3-hour interview on the phone. We hang up and, the next thing I know, the phone rings and they were like, “Tom Waits wants to talk to you again.” I’m like, “Okay.” Then he tells me this story about, when he was a little kid, there used to be this guy named Mr. Stitches who lived at the bottom of the hill that they lived on in the beauty of the curve. They used to skate down this hill and Mr. Stitches would always get pissed off and yell at them to quit skating in the streets. Then one day Mr. Stitches died of a heart attack, and all the old ladies in the neighborhood said, “You skateboarder kids killed Mr. Stitches going by his house all the time!” Tom Waits said, “I just want to say in Thrasher Magazine that we didn’t kill Mr. Stitches.” [laughs] He had to get that off his chest. So the beauty of the curve is right up there with the edge of the glide. It’s all in the beauty of the curve.

JUICE: That is epic. Those are all great nods.

BRANNON: Yeah. So I jammed all that into the song and I just hope people will like it.

JUICE: That’s incredible. It’s a great song. Hearing all those stories, I’m going to go listen to it again.

BRANNON: [laughs] Thank you. I just want to get this song out there.

JUICE: Thanks, Brannon. This was amazing.

BRANNON: Yeah, Dan, I appreciate it, bro. Thank you.

PrevPreviousBeachLife SpeakEasy with Music and Art by Skaters Surfers and Punk Rockers
NextDan Levy Behind The Image: Tony Alva at J-Boy MemorialNext