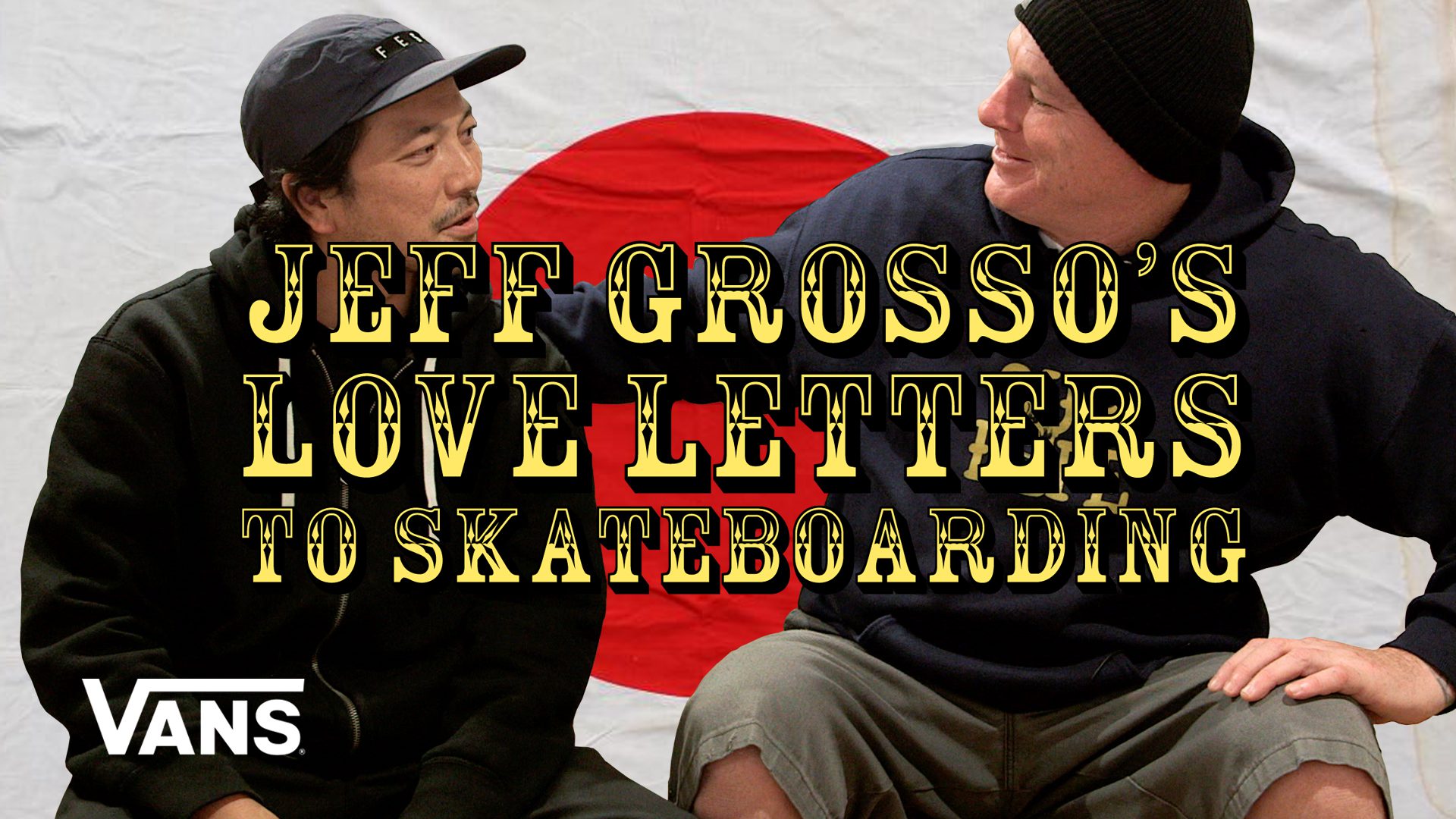 Jeff Grosso Loveletters to Japan Land of the Rising Sun

Jeff Grosso took his last trip to Japan with the Six Stair crew to film this very special episode of “Loveletters to Skateboarding” and explore the roots of Japanese skate culture. In “Grosso Forever: Loveletters to Japan”, Grosso interviews some of the most influential members of the Japanese skate scene and highlights the commitment of those profiled, as they charge on in pursuit of skateboarding, against all odds.

As Tony Hawk explains, Grosso “wanted this episode to come out during the Olympics. Jeff was very opinionated, mostly about skateboarding, but especially about the Olympics.” As Grosso said, “The people that are driving us towards the destination that we’re supposedly headed to, don’t even skateboard.” As Hawk went on to say, Grosso “wanted to juxtapose the coming of age of how big it [skateboarding] is, but also how it got there, especially in Japan. It was not easy to be a skateboarder in Japan in the ‘80s or any other time. He wanted to show the dedication of those skaters. This is his gift to you. Please enjoy Grosso Forever.”

In Tokyo, in the 1970s, skateboarding was a way for people in Japan to find creativity outside of their country’s strict cultural boundaries. Japanese skateboarding is the embodiment of a dedication to desire. Takahara Morita, renowned as a skater who established Japanese skate culture as its own niche, aside from American skateboarding, described his mindset as “Well, we skaters don’t really walk, so we think differently. We feel differently.”

Morita’s perspective on the skate culture that he and other Japanese skaters cultivated is seen in the films that he produced. Morita founded the Far East Skate Network (FESN) because he believed that there was more to skateboarding than what was being provided through competitions, and FESN’s films captured the humanity behind skateboarding, “I thought it’s better to film something real, what we were doing.” The FESN videos featured not only quick lines at spots that were unique because of Japanese architecture, but also beautiful scenes that resembled more of an art form in skating itself. Most inspiring was Morita’s desire to showcase the creativity that was necessary to skate in Japan.

In addition to Takahara Morita, the Japanese style of skateboarding owes homage to local legend, Aki Akiyama. Akiyama began skating in 1975 and is known today as one of the most influential skateboarders in terms of Japanese skating. He accredits his style to what he observed when he would go to California for competitions. Unlike Morita, Akiyama found his passion for skating by competing in vert competitions that represented what skateboarding was traditionally known for at the time. Morita and Akiyama are both responsible for what skateboarding in Japan looks like today because of the foundation they generated.

Laurence O’Keefe, a transplant skater from England, has been living in Japan for almost nine years and described the relationship between Japanese culture and skateboarding as, “They [Japanese people] got a mindset on rules and being courteous to everyone else. Skateboarding is the opposite of Japanese culture.” Suffice it to say, the strict nature of Japan has heavily influenced how spots are skated because there is a need for creativity when approaching them. The Japanese cities are made up of tight small spots, usually heavily monitored by security, so it is necessary for skaters to adapt their style to the terrain at hand.

Skate films were and remain an integral part in what Japanese skateboarding culture is. FESN set the precedent of what skate films coming out of Japan could inspire, and all-girl group Joy and Sorrow have worked at continuing that legacy. Joy and Sorrow has released a new edit every two years for the past eight years. Yuri Murai, the editor for Joy and Sorrow, explained that its debut video was the first all-girl edit that gained attention and respect from the skateboarding world.

The skate scene in Japan is primarily based in the streets and, because of high security, most skaters have to find time to shred after the sun sets. Aside from the beautifully constructed Japanese architecture that is found in street skating, there is a developing DIY scene that provides skaters with transition features that are not found in the streets.

Grosso interviews Japanese skater, Kenji Tanaka, about how important DIY skateboarding is. Tanaka speaks about how DIY skating allows for a sense of freedom that is otherwise vacant due to the cultural norms of Japan. At DIY spots, there are no rules and the skaters are free to express themselves in whichever way they please. Tanaka states “We really try to drive home the message. The coolest thing in skateboarding is the kids taking matters into their own hands… City parks are great and everything, but, too many rules.” Tanaka has formed a community behind the DIY scene of like-minded individuals who also believe skateboarding is an art form that should not be confined by societal limitations.

In this chapter of “Loveletters”, Grosso also goes on a mission to find the origins of the Japan air. The Japan air was born sometime in the mid ‘80s and is a variation of the mute air where the knees fold in towards the deck. The first published photo of a Japan air was printed in an issue of “TransWorld Skateboarding” and was taken by legendary Japanese photographer, Nisi (R.I.P.). Shortly after that issue of TWS was released, Tony Hawk adopted the trick and made it even more popular by performing it in competitions in America and Japan. After a photo of Hawk doing the Japan air ran in “TransWorld Skateboarding” in 1985, as Grosso explained, “Everybody learned Japan airs. It was a must-do trick”. In this episode, Grosso ultimately succeeds with his goal and determines that the inventor of the Japan air was half French/half Japanese skateboarder, Philippe Mentone, who influenced not only skateboarding, but other sports like snowboarding, rollerskating and wakeboarding with his trick innovation.

The creative side of skateboarding has always been emphasized in Japanese skate culture. Yoshiro Higai released a book called “Judo Air” that contains images from 1983 to 1998. “Judo Air” is an interesting collection of skate history because it captures how Japan was during that time and the community that was forming behind skateboarding. From the ‘80s to ‘90s, skateboarding was an alternative to the traditional Japanese lifestyle and it offered an escape for those who were willing to learn.

Japanese skate style is unlike that of any other country because of how it has evolved from being derived from the old school California style to becoming its own niche within skateboarding. Skaters in Japan are resilient and embody a passion that has made their skate scene desirable. Jeff Grosso perfectly captured many of the highlights and history of Japan’s skate scene, while paying respect to the strength, power and community of Japanese skateboarders, which was well-established before any world games torch was ever lit in the name of skateboarding.

[Five shorter “Love Note” episodes will dive deeper into these stories and will drop each Friday over the next month on Vans’ YouTube channel.]