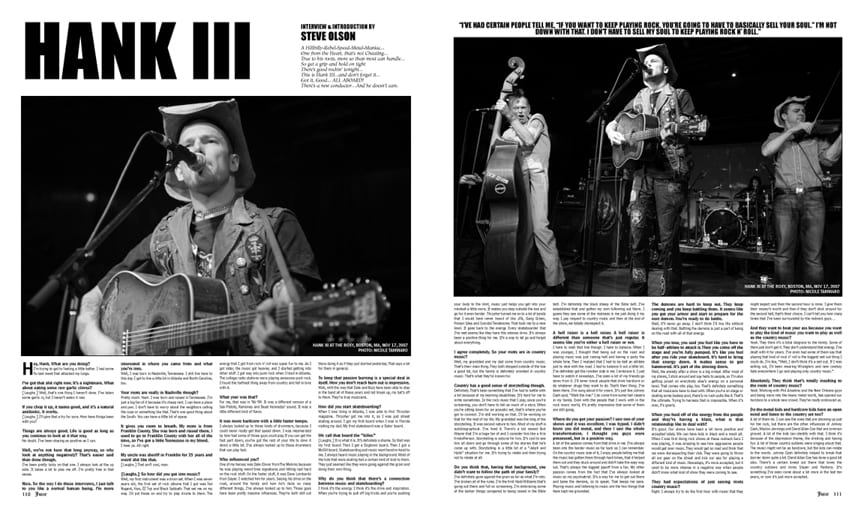 Hillbilly-Rebel-Speed-Metal-Maniac… One from the Heart, that’s not Cheating… True to his roots, more so than most can handle… So get a grip and hold on tight. There’s good rockin’ tonight… This is Hank III…and don’t forget it… Got it, Good… ALL ABOARD! There’s a new conductor…And he doesn’t care.

Hey, Hank. What are you doing?
I’m trying to get to feeling a little better. I had some flu last week that attacked my lungs.

I’ve got that shit right now. It’s a nightmare. What about eating some raw garlic cloves?
[Laughs.] Well, that’s one thing I haven’t done. I’ve taken some garlic in, but I haven’t eaten it raw.

If you chop it up, it tastes good, and it’s a natural antibiotic. It works.
[Laughs.] I’ll give that a try for sure. How have things been with you?

Things are always good. Life is good as long as you continue to look at it that way.
No doubt. I’ve been staying as positive as I can.

Well, we’re not here that long anyway, so why look at anything negatively? That’s easier said than done though.
I’ve been pretty lucky on that one. I always look at the up side. It takes a lot to piss me off. I’m pretty free in that sense.

Nice. So the way I do these interviews, I just talk to you like a normal human being. I’m more interested in where you came from and what you’re into.
Well, I was born in Nashville, Tennessee. I still live here to this day. I got to live a little bit in Atlanta and North Carolina, too.

Your roots are really in Nashville though?
Pretty much. Yeah. I was born and raised in Tennessee. I’m just a big fan of it because it’s cheap rent. I can have a place and jam. I don’t have to worry about the neighbors calling the cops or something like that. That’s one good thing about the South. You can have a little bit of space.

It gives you room to breath. My mom is from Franklin County. She was born and raised there. I used to go to Franklin County with her all of the time, so I’ve got a little Tennessee in my blood.
I hear ya. All right.

My uncle was sheriff in Franklin for 25 years and weird shit like that.
[Laughs.] That ain’t cool, man.

[Laughs.] So how did you get into music?
Well, my first instrument was a drum set. When I was seven years old, the first set of rock albums that I got was Ted Nugent, Kiss, ZZ Top and Black Sabbath. That set me on my way. I’d put those on and try to play drums to them. The energy that I got from rock n’ roll was super fun to me. As I got older, the music got heavier, and I started getting into other stuff. I got way into punk rock when I lived in Atlanta. The college radio stations were playing awesome punk rock. I found the farthest thing away from country and fell in love with it.

What year was that?
For me, that was in ’86-’89. It was a different version of a Sex Pistols, Ramones and Dead Kennedys’ sound. It was a little different kind of flavor.

Who influenced you?
One of my heroes was Dale Clover from The Melvins because he was playing weird time signatures and hitting real hard on the rock stuff. On the faster stuff, it was Dave Lombardo from Slayer. I watched him for years. Seeing his drive on the road, around the family and how he’s done so many different things, I’ve always looked up to him. Those guys have been pretty massive influences. They’re both still out there doing it as if they just started yesterday. That says a lot for them in general.

To keep that passion burning is a special deal in itself. How you don’t reach burn out is impressive.
Well, with the way that Dale and Buzz have been able to stay in the band all of these years and not break up, my hat’s off to them. They’re true musicians.

How did you start skateboarding?
When I was living in Atlanta, I was able to find Thrasher magazine. Thrasher got me into it, so I was just street skating around. I got my first board when I was in Florida visiting my dad. My first skateboard was a Gator board.

We call that board the “killer.”
[Laughs.] It is what it is. It’s definitely a shame. So that was my first board. Then I got a Dogtown board. Then I got a McGill board. Skateboarding and music went hand-in-hand to me. I always heard music playing in the background. Most of the kids that were skating had a certain kind of look to them. They just seemed like they were going against the grain and doing their own thing.

Why do you think that there’s a connection between music and skateboarding?
I think it’s the energy. I think it’s the drive and inspiration. When you’re trying to pull off big tricks and you’re pushing your body to the limit, music just helps you get into your mindset a little more. It makes you step outside the box and go for it even harder. Thrasher turned me on to a lot of bands that I would have never heard of like JFA, Gang Green, Poison Idea and Suicidal Tendencies. That took me to a new level. It goes back to the energy. Every skateboarder that I’ve met seems like they have this intense drive. It’s always been a positive thing for me. It’s a way to let go and forget about everything.

Country has a good sense of storytelling though.
Definitely. That’s been something that I’ve had to battle with a lot because of my learning disabilities. It’s hard for me to write sometimes. In the rock music that I play, since you’re screaming, you don’t have to tell as much of a story. When you’re sitting down for an acoustic set, that’s where you’ve got to connect. I’m still working on that. I’ll be working on that for the rest of my life. My granddad was the king of the storytelling. It was second nature to him. Most of my stuff is autobiographical. I’ve lived it. There’s a kid named Bob Wayne that I’m a huge fan of and I consider him like a Kris Kristofferson. Storytelling is natural for him. It’s cool to see him sit down and go through some of his stories that he’s come up with. Storytelling is a little bit of a “Jekyll and Hyde” situation for me. It’s trying to relate and then trying not to relate at all.

Do you think that, having that background, you didn’t want to follow the path of your family?
I’ve definitely gone against the grain as far as what I’m into. I’ve broken all of the rules. I’m the first Hank Williams that’s going out there and full on screaming. I’m embracing some of the darker things compared to being raised in the Bible belt. I’m definitely the black sheep of the Bible belt. I’ve established that and gotten my own following out there. I guess they see some of the realness in me just doing it my way. I pay respect to country music and then at the end of the show, we totally disrespect it.

A hell raiser is a hell raiser. A hell raiser is different than someone that’s just regular. It seems like you’re either a hell raiser or not.
I have to walk that line though. I have to balance. When I was younger, I thought that being out on the road and playing music was just raising hell and having a party the whole time. Then I realized that I had to be half an athlete just to deal with the road. I had to balance it out a little bit. I’ve definitely got the rowdier side in me. I embrace it. I just have to watch it nowadays. I’ve seen a lot of my friends go down from it. I’ll never knock people that drink hardcore or do whatever drugs they want to do. That’s their thing. I’ve been there. I’ve sung about it for years. It’s just like Johnny Cash said, “Walk the line.” I do come from some hell raisers in my family. Even with the people that I work with in the rock music world, it’s pretty impressive that some of them are still going.

Where do you get your passion? I saw one of your shows and it was excellent. I was hyped. I didn’t know you did metal, and then I saw the whole transformation. I thought you guys were possessed, but in a positive way.
A lot of the passion comes from that drive in me. I’ve always been into the harder music as far back as I can remember. On the country music side of it, I enjoy people telling me that the music has gotten them through hard times, that it helped them out and they stuck around and didn’t take the easy way out. That’s always the biggest payoff from a fan. My other passion comes from the fact that I’ve always looked at music as my psychiatrist. It’s a way for me to get out there and tame the demons, so to speak. That keeps me sane. Playing music and listening to music are the two things that have kept me grounded.