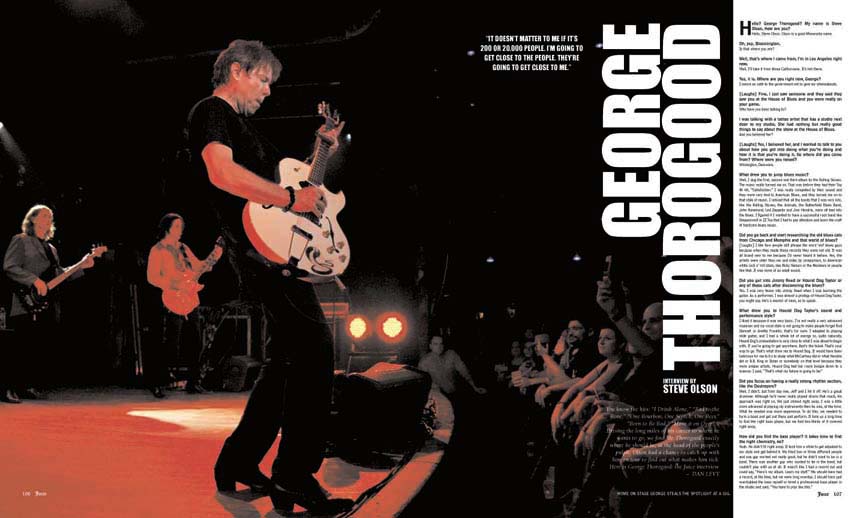 There’s one of a kind. There are others similar. Distinct, a sound all your own. Embrace the sound, lay it down. Trust what that sound is. Believe in your sound, and that is George Thorogood.

Hello? George Thorogood? My name is Steve Olson. How are you?
Hello, Steve Olson. Olson is a good Minnesota name.

Oh, yep, Bloomington.
Is that where you are?

Well, that’s where I came from. I’m in Los Angeles right now.
Well, I’ll take it from those Californians. It’s hot there.

Yes, it is. Where are you right now, George?
I swore an oath to the government not to give my whereabouts.

[Laughs] Fine. I just saw someone and they said they saw you at the House of Blues and you were really on your game.
Who have you been talking to?

I was talking with a tattoo artist that has a studio next door to my studio. She had nothing but really good things to say about the show at the House of Blues.
And you believed her?

[Laughs] Yes, I believed her, and I wanted to talk to you about how you got into doing what you’re doing and how it is that you’re doing it. So where did you come from? Where were you raised?
Wilmington, Delaware.

What drew you to jump blues music?
Well, I dug the first, second and third album by the Rolling Stones. The music really turned me on. That was before they had their Top 40 hit, “Satisfaction.” I was really compelled by their sound and they were very tied to American Blues, and they turned me on to that style of music. I noticed that all the bands that I was very into, like the Rolling Stones, the Animals, the Butterfield Blues Band, John Hammond, Led Zeppelin and Jimi Hendrix, were all tied into the blues. I figured if I wanted to have a successful rock band like Steppenwolf or ZZ Top that I had to pay attention and learn the craft of hardcore blues music.

Did you go back and start researching the old blues cats from Chicago and Memphis and that world of blues?
[Laughs] I like how people still phrase the word ‘old’ blues guys because when they made those records they were not old. It was all brand new to me because I’d never heard it before. Yes, the artists were older than me and older, by comparison, to American white rock n’ roll stars, like Ricky Nelson or the Monkees or people like that. It was more of an adult sound.

What drew you to Hound Dog Taylor’s sound and performance style?
I liked it because it was very basic. I’m not really a very advanced musician and my vocal style is not going to make people forget Rod Stewart or Aretha Franklin, that’s for sure. I adapted to playing slide guitar, and I had a whole lot of energy so, quite naturally, Hound Dog’s presentation is very close to what I was about to begin with. If you’re going to get anywhere, that’s the ticket. That’s your way to go. That’s what drew me to Hound Dog. It would have been ludicrous for me to try to study what McCartney did or what Hendrix did or B.B. King or Dylan or somebody on that level because they were unique artists. Hound Dog had bar room boogie down to a science. I said, “That’s what my future is going to be.”

Did you focus on having a really strong rhythm section, like the Destroyers?
Well, I didn’t, but from day one, Jeff and I hit it off. He’s a great drummer. Although he’d never really played drums that much, his approach was right on. We just clicked right away. I was a little more advanced at playing my instruments then he was, at the time. What he needed was more experience. To do this, we needed to form a band and get out there and perform. It took us a long time to find the right bass player, but we had two-thirds of it covered right away.