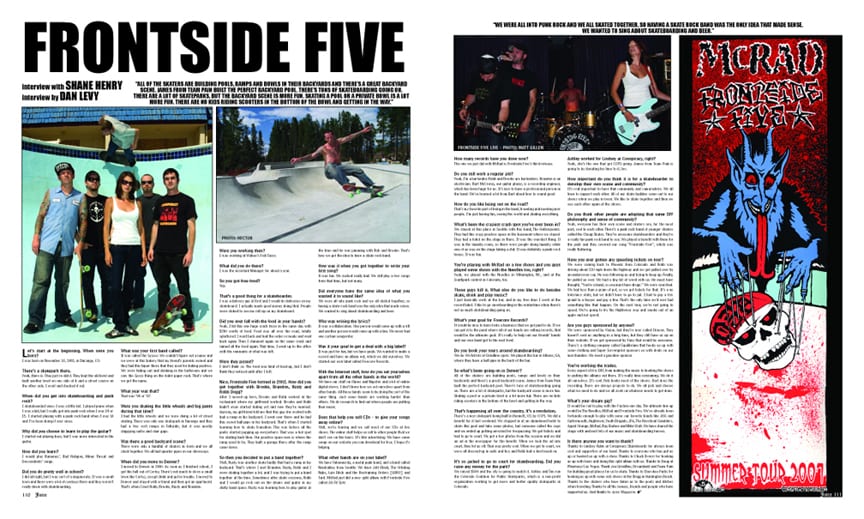 “All of the skaters are building pools, ramps and bowls in their backyards and there’s a great backyard scene. James from Team Pain built the perfect backyard pool. There is tons of skateboarding going on. There are a lot of skateparks, but the backyard scene is more fun. Skating a pool or a private bowl is a lot more fun. There are no kids riding scooters in the bottom of the bowl and getting in the way.”

There’s a skatepark there.
Yeah, there is. They just re-did it. They kept the old bowl and built another bowl on one side of it and a street course on the other side. I went and checked it out.

When did you get into skateboarding and punk rock?
I skateboarded since I was a little kid. I played piano when I was a kid, but I really got into punk rock when I was 14 or 15. I started playing with a punk rock band when I was 16 and I’ve been doing it ever since.

Why did you choose to learn to play the guitar?
I started out playing bass, but I was more interested in the guitar.

How did you learn?
I would play Ramones’, Bad Religion, Minor Threat and Descendents’ songs.

Did you do pretty well in school?
I did all right, but I was sort of a degenerate. It was a small town and there were a lot of cowboys there and they weren’t really down with skateboarding.

What was your first band called?
It was called The Syscos. We couldn’t figure out a name and we were at this bakery that my friend’s parents owned and they had this liquor there that they used for baking pastries. We were hiding out and drinking in the bathroom and we saw the Sysco thing on the toilet paper rack. That’s where we got the name.

Was there a good backyard scene?
There were only a handful of skaters in town and we all stuck together. We all had quarter pipes in our driveways.

When did you move to Denver?
I moved to Denver in 2000. As soon as I finished school, I got the hell out of Cortez. There’s not much to do in a small town like Cortez, except drink and get in trouble. I moved to Denver and stayed with a friend and then got an apartment. That’s when I met Robb, Brooke, Rusty and Brandon.

Were you working then?
I was working at Wahoo’s Fish Tacos.

What did you do there?
I was the Assistant Manager for about a year.

So you got free food?
Yep.

Did you ever fall with the food in your hands?
Yeah, I hit this one huge crack twice in the same day with $200 worth of food. Food was all over the road, totally splattered. I went back and had the order re-made and went back again. Then I slammed again on the same crack and ruined all the food again. That time, I went up to the office with the remnants of what was left.

Were they pissed?
I don’t think so. The food was kind of beat-up, but I don’t think they noticed until after I left.

Nice. Frontside Five formed in 2002. How did you get together with Brooke, Brandon, Rusty and Robb Dogg?
After I moved up here, Brooke and Robb worked at the restaurant where my girlfriend worked. Brooke and Robb hadn’t even started dating yet and now they’re married. Anyway, my girlfriend told me that this guy she worked with had a ramp in his backyard. I went over there and he had this sweet half-pipe in his backyard. That’s when I started learning how to skate transition. This was before all the parks started popping up everywhere. That was a hot spot for skating back then. Our practice space now is where the ramp used to be. They built a garage there after the ramp came down.

So then you decided to put a band together?
Well, Rusty was another skate buddy that had a ramp in his backyard. That’s where I met Brandon. Rusty, Robb and I were skating together a lot, and I was trying to put a band together at the time. Sometimes after skate sessions, Robb and I would go rock out on the drums and guitar in my shitty band space. Rusty was learning how to play guitar at the time and he was jamming with Rob and Brooke. That’s how we got the idea to have a skate rock band.

How was it when you got together to write your first song?
It was fun. We sucked really bad. We still play a few songs from that time, but not many.

Did everyone have the same idea of what you wanted it to sound like?
We were all into punk rock and we all skated together, so having a skate rock band was the only idea that made sense. We wanted to sing about skateboarding and beer.

Was it your goal to get a deal with a big label?
It was just for fun, but we have goals. We wanted to make a record and have an album out, which we did ourselves. We started our own label called Fivecore Records.

With the Internet stuff, how do you set yourselves apart from all the other bands in the world?
We have our stuff on iTunes and Napster and a lot of online digital stores. I don’t know how we set ourselves apart from other bands. All these bands seem to be doing the sort of the same thing. Just some bands are working harder than others. We do research to find out where people are putting their music.

Does that help you sell CDs – to give your songs away online?
Well, we’re touring and we sell most of our CDs at live shows. The online stuff helps us sell to other people that we don’t see on the tours. It’s like advertising. We have some songs on our website you can download for free. I hope it’s helping.

What other bands are on your label?
We have Valiomierda, a metal punk band, and a band called Neutralboy from Seattle. We have Jett Black, The Orbiting Nubs, Lyin Bitch and the Restraining Orders [LBRO] and Tard. McRad just did a new split album with Frontside Five called 50/50 Split.

How many records have you done now?
The one we just did with McRad is Frontside Five’s third release.

Do you still work a regular job?
Yeah, I’m a bartender. Robb and Brooke are bartenders. Brandon is an electrician. Bart McCrorey, our guitar player, is a recording engineer, which has been huge for us. It’s nice to have a professional person in the band. We’ve learned a lot from Bart about how to sound good.

How do you like being out on the road?
That’s my favorite part of being in the band, traveling and meeting new people. I’m just having fun, seeing the world and skating everything.