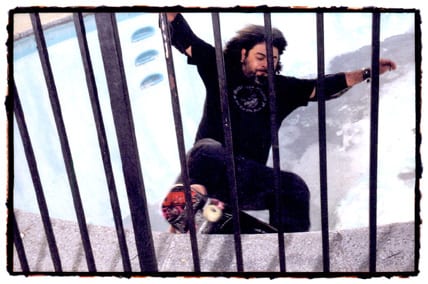 DJ CESAR rippin up some coping.

Emmanuel Guzman has landed on some Hard Luck Wheels joining John Ponts on the ranks under the Automodown Distribution empire.

Anti Hero is completing their new video filmed and edited by Rick Charnoski and Buddy Nichols of ‘Fruit of the Vine’ fame and it’s sure to be just plain gnarly.

The mad scientists at Carver Skateboards have introduced the new pocket sized six-in-one skate tool to satisfy all skateboarder’s needs – on and off the ‘crete.

DC Shoes has released the DVD of the DC video including an 86-page handbook, new footage including Dyrdek Security part 2 and Danny Way taking skateboarding to unexplored levels. Hear more about Danny Way in his full feature interview with Dave Duncan in the next issue of Juice Magazine.

Volcom is making some changes to their skate haven including a bowled corner on the vert ramp and a new street area as well. Dave Duncan and Rune Glifberg are heading up the design team with Remy Stratton.

Sid ‘The Package’ Abruzzi is educating nuns in a different part of town as Water Bros. has relocated to Broadway in Newport, RI.

Big Tim survived a heart attack and is now living the sober life. The 5.9% crew is happy he pulled through and now they have a designated driver.

Jonny Manak will be appearing in a town near you this summer, taking it on the road with The Cliftons. BBQ rib joints, beware.

The Washington Street skatepark in San Diego is nearing completion and by the way it looks, there will be years of challenging lines.

Alan ‘Ollie’ Gelfand has a new signature shoe out from the company, In California. For more from Gelfand and his sick 45-foot Team Pain bowl (and it’s air-conditioned)- go to www.ollieair.com.

Mike V and the Rats are taking it to the streets with a limited edition deck made in the USA, coming out on Outlook Skateboards this spring. OutLook team rider Packy is on the rise taking sixth place in the Tampa Am Vert finals.

Dave Reul and the Skatanic Rednecks have been hard at work on a new record and have been playing shows for loyal Redneck fans all over Southern California.

History repeats itself. Let me repeat that. History repeats itself. The ‘Lords of Dogtown’ film based on the story of the Zephyr competition team focusing on the life stories of Tony Alva, Jay Adams, and Stacy Peralta, is back in action with Sony Pictures footing the bill. Director of ‘Thirteen’ (the teenage fellatio queen film) Catherine Hardwicke, has taken the driver’s seat as the ‘L.O.D.’ director after said original directors Fred Durst and David Fincher moved on to other projects. ~ Jeff Ho, sole owner of Zephyr, at press time, had refused all involvement with the film after being given an ultimatum by Hardwicke to sign up by November 15th or be written out of the script. According to Ho, Hardwicke called him last week to congratulate him on being officially written out of the screenplay. Hardwicke, a lil’ ole gal from Texas, has been re-writing Stacy Peralta’s original version of the script. ~ The dispute between Ho and the filmmakers is not financial, as has been reported and at no point did Ho ask for a 23 million dollar deal. Instead, the conflict surrounds the rights to the Zephyr trademarks. The film’s producers are insistent on obtaining the Zephyr brand for an indefinite length of time, which Ho’s attorneys have stringently advised him to reject. In the world of movie making, merchandise is king… (There are also rumors of an old school surf/skate video game in the works) When we asked Jeff Ho, what was going on, he responded, ‘Let them make their movie. I’ll be here long after this movie hype disappears, doing what I do – building boards.’ In the meantime, to fill the void left by the lack of Jeff Ho’s endorsement, L.O.D. HQ has called on other board builders to manufacture rip-off copies of Jeff Ho’s Zephyr surfboards and skateboards for the film. Can you smell the lawsuits building? Can the film even be made without similarities to the true life story of Jeff Ho and the Zephyr surf shop? Will they call it the Z-Boys Skate Shop? ~ Nathan Pratt seems to think so. He trademarked ‘Z-Boys’ and plans to launch the new Z-Boys company with partner Jay Adams, once the film’s production is underway. ~ In the meantime, Pratt has taken over as the new proprietor of Jesse Martinez’ Z-Cult Skateboards. ~ Non-skater, Emile Hirsch has been cast in the role of Jay Adams. Word from ‘LOD’ casting is that Madonna and Sharon Stone are interested in playing the part of Jay Adam’s mom in the film. ~ After a casting session at the Skatelab in Simi Valley, CA, Eric ‘Tuma’ Britton has been cast to play Marty Grimes. Attending the casting were Tony Alva, Eric ‘Tuma’ Britton, Dave Reul, Jesse Martinez and the Venice crew. ~ Sony offered the city of Imperial Beach, CA, $15,000 to improve their Coronado skatepark in trade for the ‘LOD’ film to be filmed in the area. Filming is set to begin in March 2004. ~ You can get a look at Catherine Hardwicke’s set design skills in the cult classic ‘Thrashin” as Corey Webster wins the respect of Hook and The Daggers in better quality with it’s latest release to DVD. The real life Daggers crew with ringleaders Dave Duncan and Eddie Rategui has been busy working on some wooden bowls for Bam Margera’s ‘Viva La Bam’ show for MTV.

Burly Wheels and Bulldog Skates have added 9-year-old ripper Ronnie O’Neal from Myock, NC to the team roster. This kid comes from a family that is 200% supportive of his skateboarding, driving him all over the state to skateboard every weekend, and it shows.

Webb Trucks has been hard at work with new designs and the Mike Smith model is sure to enhance your Smith grinds.

Craig Johnson is back on the scene with Gringo Skateboards showing coping everywhere who’s boss.

Conspiracy Skateboards has a Bryan Pennington model available and the new video ‘More Concrete’ should wet your appetite for skate destruction.

Scum Skateboards has a new Benji Galloway pro model out now along with a new Jimmy the Greek pro model in the works.

Vision Streetwear can’t keep the Duane Peters Signature Shoe in stock while DP’s The Hunns ‘Long Leggs’ will be hitting the stores March 23, 2004 with Corey Parks singing on a lot of the tunes – Smokin!

Carolina Love – A new video is in progress called ‘Carolina Love’ with submitted footage from kids all over the Southeast.

Sixspace LA is preparing for the first showing of Glen E. Friedman’s breakthrough photography exhibit ‘The Idealist’ that opens on March 6th in Los Angeles, CA.

Fuel TV has been on the air, satisfying the craving for action sports. Skateboarding has a big focus on the station and Fuel TV has some of the best programming to date for our beloved art with specials like ‘Stoked: Uncovered’ – an in-depth look at the critically lauded Helen Stickler documentary about skater Mark ‘Gator’ Ragowski. Visit www.fuel.tv for current times and showings.

LOCATION CHANGE!!! The Mighty Mama Skate-O-Rama will be held May 9th, 2004, at the LAGUNA NIGUEL skatepark in LAGUNA NIGUEL, CA hosted by the International Society of Skateboarding Moms. For more info – www.skateboardmom.com

Comcast’s Outdoor Life Network has purchased the Gravity Games for over a million dollars. A 2005 Winter Gravity Games is currently being planned as an extension of the franchise. Comcast also put in a tender 45 billion dollar bid to buy out Disney but was rejected by the Disney stockholders.

The 21st Annual WaveMasters Charity Surf Contest happens May 1-2, 2004 in Jax Beach, Florida. It’s a weekend beach-fest, with 16 divisions of Florida’s hottest amateurs competing for a trip to Costa Rica, and the trademark balsa board trophies. For info, talk to Mitch Kaufman at www.wavemasters.org.

Here’s to a great idea. Respect… The Rolling Hearts Series – skate shops, skateboard companies and artists join together to raise money for local skate events as well as show how skateboarding and art can come together and effect change. The participating shops will select local area artists to design a series of Real Skateboards that will only be available at that particular skate shop. A portion of the proceeds of each of the boards sold will go back to the skate shop to be used as funding for a future skate contest or a donation to a local charity. Every board will be 100% made in the USA.The Real pros lending their support are Keith Hufnagel, Max Schaaf, Darrell Stanton, Peter Ramondetta, Dennis Busenitz, and new addition J.T. Aultz.

There are now officially over 600 skateparks listed in the USA.