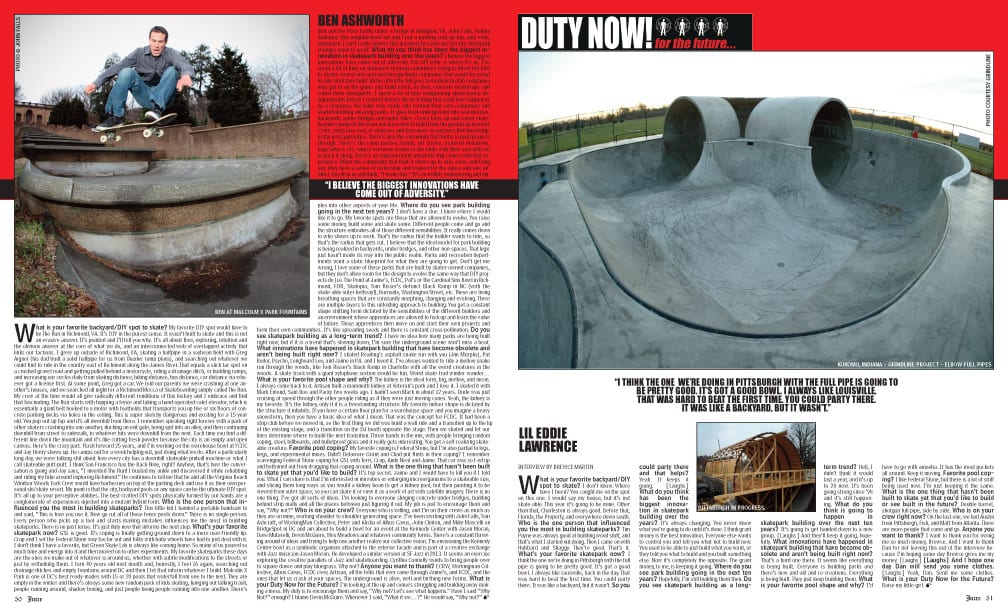 I don’t know. Where have I been? You caught me on the spot on this one. I would say my house, but it’s not skate-able. This year it’s going to be mine. Other than that, Charleston is always good. Before that, Florida, the Property, and everywhere down south.

Tim Payne was always good at building wood stuff, and that’s what I started out doing. Then I came on with Hubbard and Shaggy. They’re good. That’s it.

I think the one we’re doing in Pittsburgh with the full pipe is going to be pretty good. It’s got a good bowl. I always like Louisville, back in the day. That was hard to beat the first time. You could party there. It was like a backyard, but it wasn’t.

So you could party there and that helps?

Yeah. It keeps it going. [Laughs]

It’s always changing. You never know what you’re going to do until it’s done. I think grant money is the best innovation. Everyone else wants to control you and tell you what not to build now. You used to be able to just build what you want, or they told you what to build and you built something else. Now it’s completely the opposite. The grant money, to me, is keeping it going.

Where do you see park building going in the next ten years?

Hopefully, I’m still building them then.

Do you see skatepark building as a long-term trend?

Hell, I didn’t think it would last a year, and it’s up to 20 now. It’s been going strong since ‘98 and it’s still happening.

What do you think is going to happen in skatepark building over the next ten years?

It’s going to get handed down to a new group. [Laughs] And they’ll keep it going, hopefully.

I’d have to go with amoeba. It has the most pockets all around. Keep it moving.

I like Federal Stone, but there is a lot of stuff being used now. I’m just keeping it the same.

Double barrel, shotgun full pipe, side by side.

On the last one, we had Austin from Pittsburgh, Fish, and Matt from Atlanta. There are more people that come and go.

“I think the one we’re doing in Pittsburgh with the full pipe is going to be pretty good. It’s got a good bowl. I always like louisville. That was hard to beat the first time. you could party there. It was like a backyard, but it wasn’t.”

I want to thank you for owing me so much money, Brewce. And I want to thank Dan for not leaving this out of the interview because I’m hoping some day Brewce gives me my money. [Laughs]

[Laughs] And I hope one day Dan will send you some clothes. 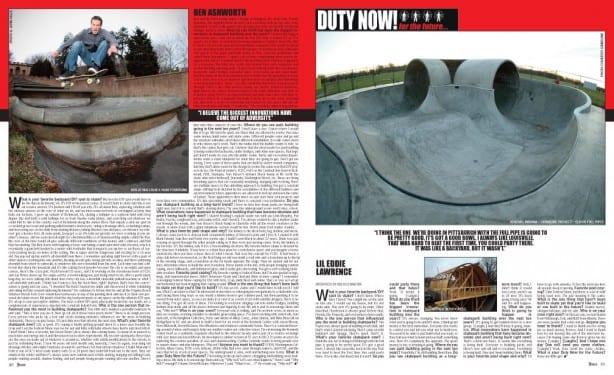